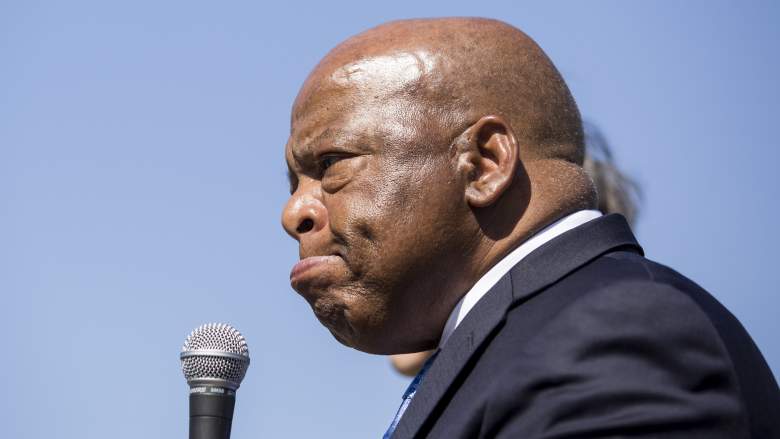 John Lewis speaks during a news conference in support of the Voting Rights Amendment Act, on Capitol Hill, June 24, 2014 in Washington, DC. (Getty)

Long-serving congressman John Lewis has dedicated his life to protecting human rights, and his efforts have won him the respect of both Republicans and Democrats alike. Over the course of his lifetime, the Alabama native has received over 50 honorary degrees from prestigious universities, and was awarded the Presidential Medal of Freedom in 2011 by President Barack Obama.

In an interview with NBC’s “Meet the Press” that will air on Sunday, Lewis says that he does not think Trump is a “legitimate president.” In an excerpt released Friday, Lewis tells host Chuck Todd, “I think the Russians participated in helping this man get elected. And they helped destroy the candidacy of Hillary Clinton. I don’t plan to attend the inauguration. It will be the first one that I miss since I’ve been in the Congress. You cannot be at home with something that you feel that is wrong, is not right.” In retaliation, the president-elect took to Twitter with a post that read, “Congressman John Lewis should spend more time on fixing and helping his district, which is in horrible shape and falling apart (not to mention crime infested) rather than falsely complaining about the election results.”

Read on to learn more about Representative John Lewis.

1. He Was Chairman of the Student Nonviolent Coordinating Committee (SNCC)

Lewis was born in Troy, Alabama, to parents who were sharecroppers. He was raised on his family’s farm, and attended segregated public schools growing up. After graduating from the American Baptist Theological Seminary in Nashville, Lewis went on to receive a bachelor’s degree in Religion and Philosophy from Fisk University. As a student, he was extremely dedicated to the Civil Rights Movement, and organized sit-ins and voter registration efforts like the Selma to Montgomery marches.

The Student Nonviolent Coordinating Committee was founded by young civil rights activists in April 1960. Veteran activist Ella Baker conceived the idea for a student-run organization, and invited many black students who had participated in sit-ins in early 1960 to join her.

In 1961, Lewis joined the SNCC in its Freedom Rides, fighting for equal rights at segregated bus terminals across the South. In 1963, Chuck McDew stepped down as SNCC chairman and Lewis was chosen to take over. Click here to hear Lewis discuss his experience on the Freedom Rides.

On August 28, 1963, over 200,000 Americans came together for the March on Washington, during which Martin Luther King Jr. gave his famous “I Have a Dream” speech. At just 23, John Lewis was the youngest keynote speaker at the historic event.

2. He Was Beaten by Police in Selma During a March for Civil Rights in 1965 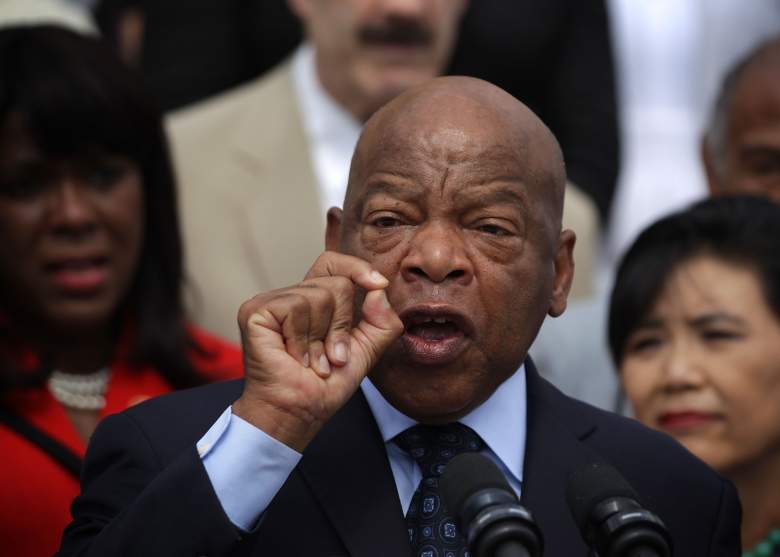 John Lewis speaks as during a rally in front of the U.S. Capitol July 30, 2015 on Capitol Hill in Washington, DC. (Getty)

On March 7, 1965, Lewis and Hosea Williams of the Southern Christian Leadership Conference led a group of about 600 voting rights rights activists across the Edmund Pettus Bridge in an attempt to march to Montgomery. As the group made their way out of Selma, they were met by about 150 Alabama State troopers who violently advanced on the activists with clubs, bullwhips, and tear gas, according to the American Originals from the National Archives.

25-year-old Lewis was beat by “a state trooper with a nightstick”, and suffered a skull fracture. He was just one of 58 who were treated at a local hospital for injuries. Speaking with Democracy Now last year, Lewis said, “I had a concussion at the bridge. My legs went out from under me. I felt like I was going to die. I thought I saw Death. All these many years later, I don’t recall how I made it back across that bridge to the church.” The day has since been given the title “Bloody Sunday”.

In his testimony from the hearing, Attorney Hall asked Lewis to describe the event. Lewis said that the Troopers used tear gas to stop the demonstrators despite the fact that none of the marchers used violence or any kind of retaliation. “Well, when we were forced back, most of the people in line knelt in a prayerful manner; they had back toward the — Selma, kneeling, the line all the way back was almost a spontaneous reaction on the part of all the people in the line as far back as you could see, and at that time the Major ordered the Trooper to put on their gas masks, and they started throwing gas, and people became sick and started vomiting, and some of us was forced off of the highway and behind some buildings in the woods.” 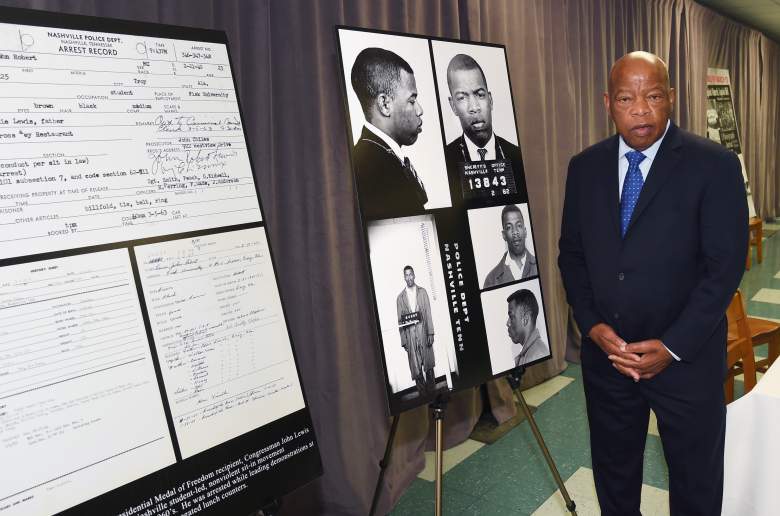 In an interview last year with CNBC, John Hardwood asked Lewis if he thinks the polarization between parties these days is better than it was during the ’60s. Lewis said, “I’m not sure whether it’s better or not. It’s important that the Republican Party, like the Democratic Party, try to reach out. It’s in the best interest of all of us. Because in the final analysis we’re one people. We’re one family.”

In 2001, Lewis was granted a Profile in Courage Award, given to recognize displays of courage similar to the ones JFK wrote about in his book Profiles in Courage. The award was presented to Lewis on the 40th anniversary of the 1961 Freedom Rides, during which the Alabama native was “beaten severely by mobs for challenging segregation at interstate bus terminals across the South.”

4. He’s Been Arrested Over 40 Times for His Activism

Speaking with “Daily Show” host Trevor Noah last year, Lewis revealed that during the ’60s, he was arrested 40 times, and since he’s been in Congress, he’s been arrested another five times. “It is a struggle of a lifetime. Maybe many lifetimes, but you must give it all… Continue to push and pull. Not just to make America better, but to make our planet a little better.”

In December, Smithsonian.com revealed that his arrest records had finally been uncovered. David Ewing, the attorney and historian who began traced Lewis’ arrests, was at first told by Nashville officials that records indicating Lewis’ arrests “did not exist”, but “after repeated requests, officials from Nashville dug around in their archives and found evidence of three arrests between 1961 and 1963 for charges like resisting the peace, disorderly conduct and resisting arrest.”

To date, Smithsonian.com reveals that Lewis’ protesting and activism has had him arrested at least 45 times, with the most recent being in 2013 while protesting in support of comprehensive immigration reform. Seven other members of Congress were arrested, as well. 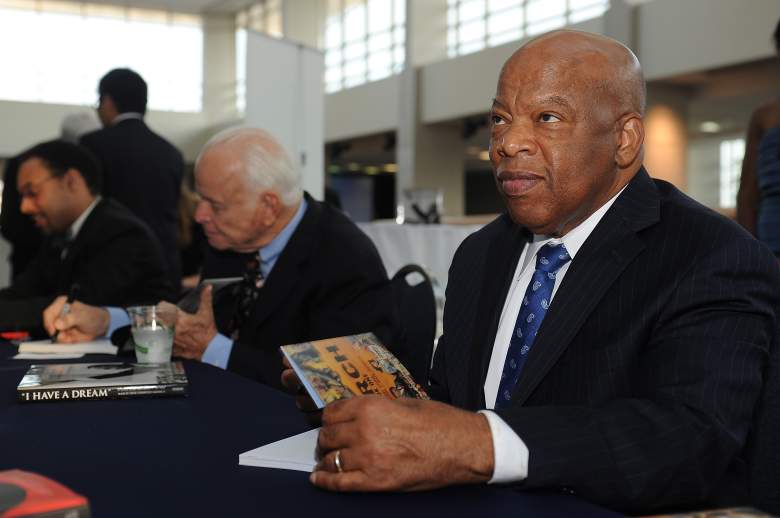 Congressman John Lewis signs copies of his book at the Emancipation Of Capital Gala And Awards Ceremony celebrating the 150th Anniversary of the Emancipation Proclamation at Washington Convention Center on August 22, 2013 in Washington, DC. (Getty)

In 2013, Lewis co-authored a graphic novel titled “March”, along with Andrew Aydin. The story chronicles Lewis’ own coming of age during the Civil Rights Movement. The New York Times writes, “… it’s a capsule lesson in courage of conscience, a story that inspires without moralizing or simplifying in hindsight.”

The third book in the March trilogy, “March: Book Three”, was published in August 2016, and won the National Book Award for Young People’s literature. Speaking with Graphic Novel Reporter, Lewis was asked why he decided to share his stories as a series of graphic memoir. He said:

It was an attempt to make the words come alive. When I first moved to Atlanta back in 1963, at the age of 23, I was here to see Martin Luther King, Jr. preach. And his father would be in the church and would urge his son: ‘Make it plain, make it real.’ I think by using the graphic format, it is making it available to a lot of people who want to read and see those illustrations, and to make them feel it. Especially young children. It’s not just simple words; it’s actions. And that’s what my life has been and what the movement was. It was about action.

Lewis told NBC News that he doesn’t plan on attending Trump’s inauguration. “It will be the first one that I miss since I’ve been in Congress. You cannot be at home with something that you feel that is wrong, is not right.”

Loading more stories
wpDiscuz
12
0
Would love your thoughts, please comment.x
()
x
| Reply
John Lewis is a veteran Congressman and civil rights icon who was the youngest speaker at the 1963 March on Washington.