Policemen secure the area around a train station after an axe attack on passengers at the main train station on March 9, 2017 in Duesseldorf, Germany. (Getty)

A mentally ill asylum seeker from Kosovo has been identified as the man who went on a bloody rampage with an ax at a Dusseldorf, Germany, train station, wounding nine people. He was also hospitalized after being injured while trying to escape.

Authorities said the 36-year-old attacker has psychological problems and has a history of mental health issues, and investigators have ruled out Islamic terrorism as a motive.

He was identified by Spiegel Online as Fatmir H. His last name has not been released, per German privacy standards.

Three of the nine victims attacked during the Thursday evening incident at the Dusseldorf station were seriously wounded, but all are expected to survive.

1. Witnesses Say There Was ‘Blood Everywhere’ After Fatmir Randomly Attacked People With His Ax

According to Bild, the suspect, Fatmir H., randomly attacked four or five people with the ax.

The Rheinische Post reports a 13-year-old girl was among those injured. A witness told the newspaper he helped treat the girl’s wound and get her to her father.

The newspaper also reports a 20-year-old man suffered a head injury and was pulled onto a train by friends to escape the attacker.

A photo of the ax used in the attack released by German police.

A witness told Bild he was standing while waiting for the train and someone “jumped out with an ax,” hitting people. “There was blood everywhere,” the witness said in German.

Claudia Letizia, the mother of one of the victims, shared a photo of her son in his hospital bed. She said he is in intensive care after being hit on the head from behind with the ax. Letizia said the media is downplaying the incident and called it “incomprehensible.”

Trains were halted and the station was closed until Friday morning. 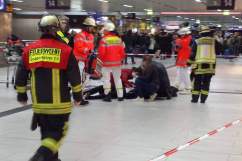 2. He Jumped Off a Bridge After the Attack & Police Say He Expected to be Shot Dead in a ‘Suicide by Cop’

Heavily armed police swarmed the Dusseldorf station after the attack, and several people were detained as a precaution.

The suspect, Fatmir H., was taken into custody after jumping off a bridge near the station. He has been hospitalized with serious injuries, according to Bild.

He was being chased by police when he jumped off the 13 foot overpass along railroad tracks.

Police said at a press conference the suspect possibly carried out the attack as an attempt to end his life, The Local reports.

Fatmir told police he hoped to be shot dead.

“We call that ‘suicide by cop’, police crime squad chief Dietmar Kneip told reporters. But luckily we were able to arrest him.”

He suffered serious injuries, including multiple broken bones, but is expected to survive, Kneip said.

3. He Came to Germany From Kosovo in 2009 for ‘Humanitarian Reasons’

The suspect was identified Thursday only as a 36-year-old from the former Yugoslavia.

On Friday, Spiegel Online reported that the suspect, Fatmir H., came to Germany from Kosovo in 2009 for “humanitarian reasons.”

He was living in an apartment in Wuppertal, about 35 minutes away from Dusseldorf.

4. He Suffers From Paranoid Schizophrenia & His Brother Told Police He Grew Worried When Fatmir Bought an Ax Last Week

Police say the suspect has a history of mental health issues and they found a doctor’s diagnosis in his apartment showing he suffers from paranoid schizophrenia, Spiegel Online reports.

His brother said he grew worried last week when Fatmir bought an ax, The Local reports.

Fatmir had been reported missing by his concerned brother.

5. The Rampage Sparked Fears of Terrorism in the Wake of Other German Incidents & Was Followed by Another Machete Attack on Friday

Police blocks a road near the site where a 80-year-old was attacked with a knife on March 10, 2017 in Duesseldorf, western Germany. (Getty)

A second terrifying attack occurred on Friday in Dusseldorf, when an 80-year-old man was attacked by a man armed with a machete in the western German city, The Telegraph reports.

The victim in the Friday incident is expected to survive. Police do not believe the attack, which happened in a parking lot near a school, is connected to the train station incident.

Police were still searching for a suspect in the Friday assault.

The bloody rampage at the train station immediately sparked fears of terrorism in the wake of several incidents over the past year in Gemrany and around Europe, including another ax attack last summer that was inspired by ISIS.

Five people were injured on July 18, 2016, when a man with an ax attacked passengers on a train in Wuerzburg in Southern Germany, according to the BBC.

The attacker, an asylum seeker from Pakistan named Muhammed Riyad, was fatally shot by police. Police said Riyad left behind a martyrdom video, which was distributed by ISIS. He claimed he was instructed by ISIS to use an ax in the attack.

ISIS has distributed materials to its followers instructing them to attack using whatever method available to them, whether it be with a gun, a knife, an ax or a vehicle.

In December, 12 people were killed and 48 were injured in an ISIS-inspired truck attack on a Christmas market in Berlin.

In July 2016, a suicide bomber detonated an explosive outside a wine bar in Ansbach. Twelve people were injured, but the bomber was the only person killed. He pledged allegiance to ISIS before the bombing, the first suicide attack in German history. 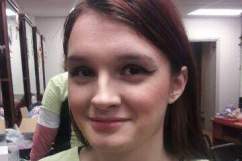