The ACX Crystal, a container ship, collided with USS Fitzgerald, and seven U.S. sailors were found deceased inside a damaged berthing compartment.

Since the tragedy, the ACX Crystal has faced scrutiny from investigators, and there are questions about its trajectory.

“A number of Sailors’ bodies that were missing from the collision between USS Fitzgerald (DDG 62) and a merchant ship have been found,” the US 7th Fleet said in a news release on June 17, without specifying the number. However, CNN reported that all of the seven missing sailors’ bodies were tragically found in USS Fitzgerald’s flooded compartments.

The tragedy unfolded on June 16 and ignited a massive search effort by the Japanese Coast Guard and U.S. Navy. It’s not yet clear what caused the collision, but the ACX Crystal is being investigated for possibly making a sharp turn before the collision. However, that turn might have come after the collision, and ACX Crystal could have been operating on autopilot, one expert said.

The tragedy has many people wondering more about the ACX Crystal vessel.

1. The ACX Crystal Is a Container Ship That Sails Under the Flag of the Philippines

Photos showing the damage on both the ACX Crystal and USS Fitzgerald; appears the Crystal hit the Fitzgerald pic.twitter.com/nSPvEAn16y

According to CNN, “The two ships collided about 2:30 a.m. local time in the Pacific Ocean about 56 nautical miles from the port of Yokosuka and 12 miles off the Izu Peninsula.”

The ACX Crystal sails under the flag of the Philippines, and its home port is Manila, according to MarineTraffic.

The Nippon Yusen Kaisha company lists a vessel schedule for ACX Crystal showing multiple stops in Japan. One of the world’s oldest and largest shipping companies, NYK was founded in 1885 with a fleet of 58 steamships. NYK says on its website that ACX Crystal is nine years old.

Maritime records have previously listed the ship as being registered to Sinbanali Shipping, Inc. The container ship was built in South Korea.

According to Maritime Bulletin, “Container ship ACX CRYSTAL though Philippines-flagged, said to be operated by Japanese NYK. Her damages though substantial, aren’t too serious, let alone critical.” 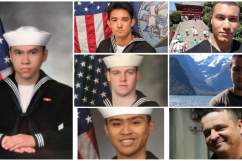 2. The Ship Is Much Larger Than USS Fitzgerald & No One Was Injured on the ACX Crystal

Technical specifications of the #ACXCrystal:

USS Fitzgerald, a Navy destroyer, is a very large vessel. In fact, it’s 505 feet long. But the ACX Crystal is much larger.

Maritime Bulletin said the container ship was also damaged, to the bow, but continued on to Tokyo Bay. However, NYK said that no one on the ACX Crystal suffered injuries and added, according to CNN, “Our thoughts and deep concerns go out to all those directly affected.”

“Container ship was en route from Nagoya to Tokyo, while USS FITZGERALD understood to be sailing either to, or from, Yokosuka Naval Base. Container ship bow struck destroyer starboard in bridge area, destroying part of superstructure. Container ship suffered bow damages, reportedly bow stern was breached, but vessel remained seaworthy and resumed sailing towards Tokyo, at 1300 Tokyo time she was entering Tokyo Bay at some 12 knots speed,” wrote Maritime Bulletin. 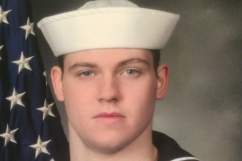 3. Some Marine Trackers Say the ACX Crystal Veered Off Course & the Crew Is Being Questioned After the Ship Made a ‘Sharp Turn’

There is a discrepancy in the timeline, reported UK Daily Mail, with the company insisting the collision happened earlier than the Navy said it did. That’s critical because tracking sites show a sharp turn, but the earlier time frame would mean the ACX Crystal turned after the collision to see what happened, not before it. UK Daily Mail quoted one expert who said the ship may have been operating on autopilot.

According to The Guardian, ACX Crystal “berthed at Tokyo’s Oi wharf, where its crew was questioned by investigators.” The cause is not yet clear, but “Japan’s public broadcaster NHK said the ACX Crystal had made a sharp turn shortly before the collision,” reported The Guardian.

The news site added, “Japan’s coastguard and the US navy plan to question crew members from the ACX Crystal, and could treat the collision as a possible case of endangerment of traffic caused by professional negligence.”

You can track the ACX Crystal in real time via maps on maritime tracking websites. However, some trackers on Twitter are claiming the ship veered off course before the collision.

This picture shows the track and likely area that the ACX Crystal hit the USS Fitzgerald. Was on its way to Tokyo. pic.twitter.com/S1ItummPKs

The Navy has not confirmed this information. Nor has it explained why USS Fitzgerald did not see the ACX Crystal coming and vice versa.

You can also track the ACX Crystal in real time here. It was traveling at a speed of 12.4 knots and was still in motion in the hours after the collision.

The collision occurred at a time when sailors would have mostly been asleep in berths that have now flooded in some cases, reported UK Daily Mail, which added that the container ship struck the Fitzgerald’s sleeping quarters.

Wrote Maritime Bulletin, “USS FITZGERALD hull was breached above and below waterline, with water ingress in some compartments. The ship is under own power, though her propulsion is limited. Crew are pumping out water.”

“There are seven Sailors unaccounted for; the ship and the Japanese Coast Guard continues to search for them,” the U.S. 7th Fleet said in a statement on June 16.

Tragically, on June 17, the Navy said the sailors’ bodies had been found in a damaged area of the ship that divers accessed. “As search and rescue crews gained access to the spaces that were damaged during the collision this morning, the missing Sailors were located in the flooded berthing compartments. They are currently being transferred to Naval Hospital Yokosuka where they will be identified,” wrote the US 7th Fleet.

“The families are being notified and being provided the support they need during this difficult time. The names of the Sailors will be released after all notifications are made.”

The identified sailor, Rigsby, is from Virginia and was a volunteer firefighter back home.

U.S. and Japanese support from the Navy, Maritime Self Defense Force and Coast Guard are in the area to ensure that the Sailors on USS Fitzgerald have the resources they need to stabilize their ship. As more information is learned, we will be sure to share to it with the Fitzgerald families and when appropriate the public. Thank you for your well wishes and messages of concern. All of our thoughts and prayers are with the Fitzgerald crew and their families,” said Adm. John Richardson, Chief of Naval Operations.

The USS Fitzgerald ship suffered “damage on starboard side above & below waterline. Some flooding,” reported the Navy, but it was later running on its own power.

Cmdr. Bryce Benson, Fitzgerald’s commanding officer, was injured in the collision and “transferred to U.S. Naval Hospital Yokosuka and is reportedly in stable condition,” according to the U.S. 7th Fleet.

In addition to the captain and those found dead, two sailors suffered injuries. “2 Sailors in addition to Cmdr. Benson have been medevac’d from FITZ to USNH-Yokosuka for lacerations & bruises,” reported the U.S. 7th Fleet.

5. Japanese & U.S. Authorities Were Trying to Stabilize the Ship & Find the Crew Members

I count 8 Japanese tugs and 1 firefighting vessel dispatched towards ACX Crystal. Interestingly, looks like a China CG vessel on the scene. pic.twitter.com/ZnCgdSVNaw

The Japanese Coast Guard and US Navy moved swiftly to stabilize the ship, which the Navy said took on some flooding, and to, most importantly, look for the missing sailors.

It turned out the sailors did not go overboard, but, rather, were inside a flooded berthing compartment in the ship.

According to CNN, “the area of the collision, 12 miles (20 kilometers) off the tip of the Izu Peninsula, is known for its heavy maritime traffic and has been the site of numerous past accidents.”

Loading more stories
wpDiscuz
47
0
Would love your thoughts, please comment.x
()
x
| Reply
ACX Crystal is the ship that collided with USS Fitzgerald. Seven US sailors were missing. Learn more about the container ship from the Philippines.