Five police officers, including Crystal Griner and David Bailey of the Capitol Police were given the Medal of Valor by President Donald Trump for saving lives at a Congressional baseball practice.

Trump bestowed the medals on the five police officers during a ceremony at the White House in which he lauded them as “heroes.” The other three officers honored – Nicole Battaglia, Alex Jensen, and Kevin Jobe – are members of the Alexandria, Virginia police force who also responded to the shooting scene to heroically stop the gunman.

According to The Alexandra Times, they were part of the gunfight and responded to the scene immediately. Battaglia and Jobe are credited with neutralizing the gunman.

“The assault on June 14 reminds us that evil exists in this world but it also reminds us that heroes walk in our midst,” the president said at the ceremony, according to a pool report. He thanked law enforcement officers in general “for doing the tough jobs, the dangerous jobs and sometimes the thankless jobs.”

You can watch video of Trump giving the medal to Griner here:

And here’s Trump bestowing Bailey with his medal:

“They are American heroes and we salute them,” Trump said on July 27 at the ceremony for the five officers.

Before becoming a Capitol police officer, Griner played college basketball for Maryland’s Hood College. Regarded as a talented athlete with a powerful determination, it’s good fortune that she was one of those assigned to protect the politicians and staffers gathered in the park on the morning of June 14. Her quick instincts, and those of fellow Capitol police officer Bailey and the three Alexandria police officers, may have averted a massacre of many of the nation’s leaders.

President Trump honored @NCCU grad Officer David Bailey for his bravery during that shooting at the congressional baseball practice. pic.twitter.com/OpSLWrtCAW

“She is amazing, and she’s a hero,” said retired Capitol Police Chief Kim Dine to CBS News. “She epitomized what being a hero’s all about.”

Griner was still on crutches during the White House ceremony.

Griner and Special Agent Baily were at the game to protect the Congressmen present when James Hodgkinson, a disgruntled Bernie Sanders campaign volunteer from Belleville Illinois, rushed forward and starting shooting in what CNN called a “deliberate act.” The Alexandria officers responded to the scene within minutes.

Five people, including Rep. Steve Scalise, were wounded in the attack, as were two officers.

Scalise was only recently released from the hospital and is still undergoing rehabilitation.

Hodgkinson, 66, a Republican critic and home mold inspector from Illinois, later died from his wounds.

Republican Sen. Rand Paul told MSNBC’s “Morning Joe” that “he heard as many as 50 shots. Paul described seeing shots land near aides who had taken cover on the ground,” according to The Hill.

As staffers tried to get away from the gunfire, the Capitol police officers acted heroically, Paul said. “Had they not been there, it would have been a massacre,” Paul, R-Ky., said to MSNBC.

According to his LinkedIn page, Bailey, 32, has been working as a United States Capitol Police Officer for over 9 years. His page states that as a Capitol Officer, he is “responsible for the protection of Members of Congress, Officers of Congress, and their families as expanded by statute to the entire United States, its territories and possessions, and the District of Columbia.” As part of his job, Bailey also prevents, detects, and investigates criminal acts and enforces traffic regulations.

His page reveals that he was an administrator at the US Fish and Wildlife Service in Falls Church, Virginia, from 2005 to 2008. 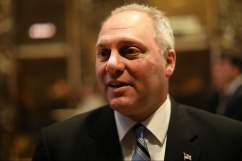 Loading more stories
wpDiscuz
2
0
Would love your thoughts, please comment.x
()
x
| Reply
Crystal Griner and David Bailey, Capitol police officers who helped stop a gunman at a congressional baseball practice, were hailed by Donald Trump as heroes, as were three Alexandria police officers. Watch the video of them getting medals of valor.