Getty U.S. President Donald Trump waves as he walks with his wife Melania to Marine One while departing from the White House on July 12, 2017 in Washington, DC. The Trumps are traveling to France.

Trump has referenced “Jim” as a sort-of expert on all things Paris and, with the president heading to France for Bastille Day, that has people wondering: Who is Jim? Does Jim really exist at all? (No, he is not Jim Comey.)

Getty U.S. President Donald Trump and his wife first lady Melania Trump walk to Marine One while departing from the White House on July 12, 2017 in Washington, DC. President Trump is traveling to France where he will meet with the president and will attend Bastille Day events on Friday.

President Trump has used his “friend Jim” to point out the dangers of extremism. The reason people are bringing up Jim now? Trump and his wife, Melania, were headed to Paris, France for Bastille Day celebrations, and Trump’s friend Jim has had a lot of things to say about Paris.

According to The Associated Press, “Jim is a friend who loves Paris and used to visit every year. Yet when Trump travels to the city Thursday for his first time as president, it’s unlikely that Jim will tag along. Jim doesn’t go to Paris anymore. Trump says that’s because the city has been infiltrated by foreign extremists.” 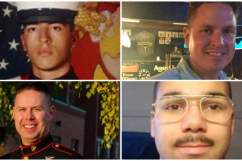 GettyThe Trumps on their way to Paris.

Trump’s friend received time in the presidential spotlight when Trump brought up his name in February, although AP reports that Trump brought up Jim’s name “repeatedly” on the campaign trail.

Trump used Jim to back up his argument that “foreign terrorists will not be able to strike America if they cannot get into our country,” according to The Intercept.

Speaking to conservative activists in Maryland, Trump revealed that his friend, Jim, stopped going to Paris because “Paris is no longer Paris.” According to The Intercept, Trump said Jim “told the president he stopped making annual trips to the French capital four or five years ago.”

Trump provided some clues about Jim during that speech.

“No matter the issue, Trump knows a guy” https://t.co/cIOonfB7Hy

“I have a friend. He’s a very, very substantial guy. He loves the City of Light. He loves Paris.”

Trump said Jim has a wife and family. Trump hasn’t “seen him in awhile.” Jim used to go to Paris every summer for years and years. Then, he told Trump: “Paris, I don’t go there anymore. Paris is no longer Paris… he wouldn’t miss it for anything,” Trump said. “Now he doesn’t even think of going there. Take a look at what’s happening to our world, folks. We have to be smart. We can’t let it happen to us.”

3. Some Reporters Are Questioning Whether Jim Is Real

The Trumps depart for Paris.

With Trump headed back to Paris, some reporters decided to ask the White House for Jim’s last name. To no avail.

The AP put it this way: “Whether Jim exists is unclear. Trump has never given his last name. The White House has not responded to a request for comment about who Jim is or whether he will be on the trip.”

The New Yorker contacted some famous “Jims” who know Trump. The New Yorker contemplated and then ruled out Jim Kelly, former Buffalo Bill; Jim Dolan, C.E.O. of Cablevision; Jim Furyk, the golfer; Jim Davis, the footwear executive; Jim Inhofe, the senator; and Jim McNerney, former Boeing executive. None of them panned out.

Jim Mattis, the Secretary of Defense, doesn’t have a wife, ruling him out, and Jim Comey is no Friend of Trump’s. Society types tapped into the scene insisted they had no idea whom Trump was talking about.

4. The Mayor of Paris Has Mocked ‘Jim’ & Twitter Users Are Having a Field Day

When Trump brought up Jim and his decision to forgo Parisian trips, it didn’t sit well with the mayor of Paris.

Anne Hidalgo, the Paris mayor, trolled the president on Twitter with a photo of Minnie and Mickey Mouse. In English, her post reads, “Donald and his friend Jim, since @LaTourEiffel we celebrate the attractiveness of #Paris with Mickey and Minnie.”

What upset the Paris mayor was Trump and “Jim’s” contention that Paris isn’t safe, a point he was using to bolster his position on immigration.

Other people on Twitter had a field day over the possibility that Jim is imaginary.

Some people claimed to have spotted Jim.

Proof get Trump's friend Jim is real, so lay off Libs! pic.twitter.com/gg9YfTINru

One Twitter user joked, “There seems a lot of speculation over whether Trump’s friend ‘Jim’ actually exists. He does, but Trump can’t pronounce Джеймс correctly.”

One conservative blogger, The Political Future, derided questions about whether Jim is real as “fake news” by media “clowns” and theorized that “Jim” is just an alias for “Tom” – specifically Thomas Barrack, a Trump friend who has spent summers in a medieval chateau in France and used to visit Paris. So is Jim really Tom? There’s no confirmation that Jim is Tom, though; that’s just a guess too.

5. The Trumps Are Headed to Paris for the Bastille Day Celebration

Emmanuel Macron on April 18, 2017 during his visit at the KRYS group’s headquarters in Bazainville, near Paris.

Trump was invited by French President Emmanuel Macron to celebrate Bastille Day, which commemorates the beginning of the French Revolution.

If you have a theory about “Jim’s” identity, leave it in the comment thread.