Senator John McCain says that he is weighing up his treatment options after he was diagnosed with a deadly tumor. Doctors at the Mayo Clinic made the discovery while treating Sen. McCain for a blood clot above his left eye, a statement from his office says.

The press release continues saying that it was “revealed that a primary brain tumor known as a glioblastoma was associated with the blood clot.” According to his office, McCain and his family are assessing what treatment options are available. Those options “may include a combination of chemotherapy and radiation.”

Everyday Health says that those who are diagnosed with cancer at aged 75 and above have the lowest rate of survival at 4.7 percent. Though with glioblastomas, even children are given the same survival rate as older adults. The website says that prognosis for glioblastomas is often measured in months because the tumor “grows quickly, moves fast and is deadly.”

In June 2017, many questioned Sen. McCain’s behavior during former FBI Director James Comey senate testimony. The senator’s office attributed his fatigue to his staying up late to watch an Arizona Diamondbacks baseball game. According to Everyday Health, one of the symptoms of glioblastoma are “Changes in behavior, memory, or thinking abilities.”

BrainTumor.org says that the average survival rate for those with a brain tumor is only 34.4 percent. Females have a slightly higher survival rate at 34.4 percent compared against 31.7 percent for males. Sen. McCain’s tumor is the most common form of tumor.

The Cancer Center says on their website that those who have the high-risk surgery involving glioblastoma need to have radiation therapy to kill the remaining cancer cells. The surgery is high-risk due to the tumors ability to spread into vital brain tissue.

In December 2016, the National Foundation for Cancer Research announced that a new drug in the fight against glioblastoma was on the horizon.

Sending our thoughts & best wishes to @SenJohnMcCain who we know will face this challenge with his trademark strength, resolve & toughness. pic.twitter.com/Xlb4wwDUdF 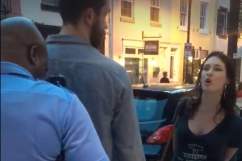 Loading more stories
wpDiscuz
7
0
Would love your thoughts, please comment.x
()
x
| Reply
Senator John McCain says that he is weighing up his treatment options after he was diagnosed with a deadly tumor.