The District Six Medical Examiner in Florida has confirmed that bodybuilder Rich Piana passed away early Friday morning, according to TMZ.

Several bodybuilders have taken to social media to pay tribute to Rich Piana amid reports he passed away after spending nearly three weeks in a coma.

Piana’s ex-wife Sara confirmed the news: “I’m in tears writing this that @1dayumay has passed away. I can hardly believe this…I am so saddened and heartbroken that he didn’t make it.”

So far, neither Piana’s partner of company have confirmed the reports, but hundreds of other tributes have been posted online.

Professional bodybuilder Dan Fine posted a tribute saying, “RIP to my great brother in iron @1dayumay #richpiana. Love you brother and I know you’re crushing it at the Great Gym in the Sky. You’ve left behind a legion of friends and fans the world over.”

Such sad news today to hear of the passing of #RichPiana. A true inspiration to us in this industry, RIP. pic.twitter.com/LGGGVesNUU

1. Piana Had Been Placed In a Medically Induced Coma

Piana collapsed in his home on Monday, August 7, while his girlfriend, Chanel Jansen, was giving him a haircut. According to Daily Mail, Piana, 46, fell down and hit his head as he fell. Jansen said he became unresponsive and called 911.

When medics arrived, Piana was still unresponsive and was transported to a nearby hospital where he was placed in a medically induced coma, according to TMZ.

According to TMZ, Jansen administered CPR to Piana until help arrived.

2. Piana is a Former Mr. California

Piana won Mr. California in 1998. He won the overall with a perfect score.

According to a Deadspin article, Piana eats nine meals a day along with drinking gigantic protein shakes.

After his competitive days were over, Piana started investing his time in business and acting. Piana started several businesses including a clothing line company, supplement company and a food prep delivery company.

Piana cited his mother and Bill Cambra as influences.

“All those monsters at Golds Gym when I was 6-years-old,” said Piana. ” Bill Cambra was the biggest influence and we are still in touch to this day!”

The energy of Golds Venice is unbelievable I would always feel like 20lbs bigger when I walk through the doors and get an Insane pump and usually discover a couple new veins popping out somewhere!! Damn I miss that place!! To all the lucky ones Training their now #loveitkillit #enjoythejourney #livinthedream

Piana also hosted a YouTube channel, where many of his videos routinely get 200,000 or more views.

In addition to pictures and videos, Piana posts advertisements for his 5% Nutrition products. The mission statement for 5% Nutrition reads as follows:

Piana’s net worth is an estimated $2.5 million, according to Mirror.

4. Piana’s Girlfriend Is a Fitness Model

I'm so proud of this new design I created for @5percentnutrition with @1dayumay and can't wait for it to launch! It'll be out very soon so keep your eyes peeled! We've already got my other designs #BrainsBeautyBooty and #GoalDigger available on the website! ?❤? #curves #beyourownkindofbeautiful #5percentnutrition #5percenters #richpiana #proud #thankful #greeneyes #girlsthatlift #girlswithcurves #blonde #braids #selfie #positivevibes #positivevibesonly

Piana’s girlfiend, Chanel Jansen, who phoned 911 after Piana collapsed, is a fitness model.

Jansen also spent time in Las Vegas as a blackjack dealer on the strip. While she doesn’t have quite the following that Piana has, she has built a large following on her Instagram account as well.

Jansen has her own YouTube channel where she shares videos called “Our Travels,” which highlight vacations that she and Piana spent together.

Piana was previously married to Sara Heimis. The two decided to split up after nearly one year of marriage. Piana released a video accusing Heimis of marrying him so she could obtain a green card, according to Inquisitr.

5. Piana Admitted to Taking Steroids Since He Was a Teen

Piana, whose mother was a body-builder in Los Angeles, California, got introduced to the world of weightlifting when he was just 11-years-old, after going to the gym to watch her train, according to Daily Mail. He began weightlifting shortly after, and competed for the first time at age 15.

After a few unsuccessful competitions, Piana turned to steroids to help him bulk up at around age 18.

In one of his training videos, Piana explained his choice, saying, “If you have the choice to steroids or stay natural, stay natural stay natural. There’s no reason to do steroids, you’re only hurting your body and hurting yourself. But if you want to become a professional bodybuilder, guess what? You’re probably going to have to f**cking do them, you’re not going to have a choice. That’s the boat I was in.”

“I was competing on stage and I was getting to the point where I was getting blown off stage if I wasn’t going to do steroids, so I took that step.”

Piana estimates that he was spending $2,500 on growth hormone per month, without even taking steroids into account, according to Daily Mail. 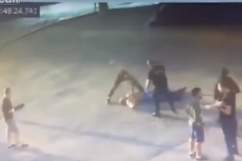 Loading more stories
wpDiscuz
21
0
Would love your thoughts, please comment.x
()
x
| Reply
Celebrity bodybuilder Rich Piana has died at the age of 46, his ex-wife has confirmed. Find out more about Piana here.