Getty Hurricane Irma is currently barreling through the state of Florida after wrecking havoc on the Caribbean last week.

As Hurricane Irma barrels through Florida, the death toll from the powerful storm continues to rise. The Associated Press reported that at least 24 people were dead in the Caribbean after the hurricane hit last week.

The death toll in the Caribbean from Hurricane Irma has risen to 24 https://t.co/KAtTFe6QAd pic.twitter.com/m9ChkNJFwV

Hurricane Irma is now wreaking havoc in in South Carolina after causing at least nine deaths in Florida, Georgia and South Carolina.

At least 24 deaths have been confirmed in Florida, Georgia and South Carolina in connection with Irma in the U.S. thus far, and at least 2 million people are without power. Two of the deaths include a Florida sheriff’s deputy and corrections officer whom were both killed after crashing head-on Sunday morning during Hurricane Irma in Hardee County, the Miami Herald reported.

Read details on the deaths of the sheriff and corrections officer below: 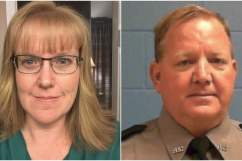 Five residents of the Rehabilitation Center at Hollywood Hills in Hollywood, Florida died after the nursing home’s air conditioning unit broke in the aftermath of Hurricane Irma. The lack of AC in the hot weather forced 115 residents to be evacuated. Three died at the facility, while two others died after they were taken to Memorial Regional Hospital. 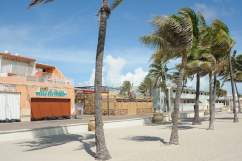 ABC reported “one person was found dead in a home in Shark Key on Sunday.” In addition the station reported two deaths in Monroe County, where the Florida Keys are located.

Hurricane Irma made landfall in Cudjoe Key, Florida at about 9:10 a.m.

Watch coverage of the Miami floods due to Irma below: 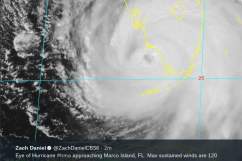 Irma is currently staged as a Category 3 storm and made landfall at 3:35 p.m. EST in Marco Island. The NHC reported that the island, along with Naples will endure some of its strongest winds within the next few hours. The hurricane has wrecked havoc into the state, turning streets into rivers along with heavy debris and uprooted trees.

“Florida’s western coast is now facing Irma’s wrath, and forecasters fear this storm will go down as one of the worst in the state’s history,” The Washington Post reported Sunday.

Many are taking to social media to show their support for everyone in Irma’s devastating path:

Vice President Mike Pence asked “the American people to keep those affected by #HurricaneIrma in their prayers:”

This morning, @VP asked the American people to keep those affected by #HurricaneIrma in their prayers. pic.twitter.com/j2gHZQoa5z

“..a place I’ve known my entire life. My heart is with you, Marco Island. ? Prayers for my family & friends,” @JanalynV tweeted:

..a place I've known my entire life. My heart is with you, Marco Island. ?

See more tweets of encouragement and support below:

Earlier today, @IvankaTrump sent her love and prayers to those affected by #HurricaneIrma. pic.twitter.com/CuAkyqQtPL

My thoughts and prayers are with everyone in the path of Hurricane Irma.

This Sunday morning please keep those impacted by #Irma in your hearts & prayers. @POTUS, our team, & the American people are with you all https://t.co/N899yxJP67

WATCH: "We need everybody's prayers, but we're a resilient state. We're going to take care of everybody." –@FLGovScott #Irma pic.twitter.com/76tnu4KFK4

The death toll of Hurricane Harvey from last month reached 70 people at the time of publishing.

Loading more stories
wpDiscuz
9
0
Would love your thoughts, please comment.x
()
x
| Reply
Hurricane Irma is viciously ripping through Florida after hitting the Caribbean last week. How many people have died so far? Click here for the latest updates.