President Donald Trump has two multi-million dollar mansions, including his palatial Mar-a-Lago estate, that are in the path of Hurricane Irma.

Mar-a-Lago is located in Palm Beach, Florida. Many forecast models are projecting that the hurricane will strike southern Florida, and some have it slamming into the Palm Beach area, but the massive storm is unpredictable. The National Weather Service says that hurricane conditions are possible in Palm Beach on Saturday night.

The projected path of Hurricane Irma from the National Weather Service on 11 p.m. September 5.

According to The Miami Herald, “Trump owns a multi-million dollar mansion on the Caribbean island of St. Martin — and Category 5 Irma is heading straight for it.” As for Trump’s Florida properties, The Herald notes that the president “owns several properties in South Florida that could sustain damage during a major storm, including his Mar-a-Lago resort and Trump National Doral golf course.”

According to a September 6 article on the St. Martin News Network, “Heads of Government from both sides of the island of St. Maarten/ St. Martin have been urging residents to take all necessary precautions as Hurricane Irma approaches the island. At 11AM on Tuesday, September 5th, Hurricane Irma strengthened to a category five hurricane which means Irma will be packing 185 MPH and is moving 14MPH, central pressure is 929 millibars, located about 300 miles of the St. Maarten.”

Check out this view of Irma and St. Martin:

Trump’s St. Martin mansion is for sale. “Trump owns the 11-bedroom gated mansion through a trust set up to avoid conflict of interests during his presidency. The trust has been trying to offload the beachfront property for months,” The Herald reported.

According to The Washington Post, the trust slashed “the asking price of $28 million by more than $11 million” this summer. The property is called Château des Palmiers.

The real estate listing for it reads: “Le Château des Palmiers is a world-class beachfront estate that includes a 5-bedroom ocean side villa and a 4-bedroom garden side villa. Situated on the white sand beach at Plum Bay, this fabulous property provides an intimate, relaxed and attentive environment within the walls of a gated enclave. The many amenities include a huge heated pool, an open air and air conditioned fitness center, a tennis court, and covered outdoor bar, billiards and dining areas. The ocean side villa features 5 King Size bedrooms with full private baths including a two-storey master suite with a master bath with Jacuzzi tub and two private balconies facing the pool and the ocean. The remaining interior spaces include a fully equipped kitchen, a formal living room, a formal dining room seating 10 and a casual outside dining area and a media room.” That’s not all. You can read more here, and you can all see a photo of the estate.

Some Trump opponents on social media have made fun of the fact the hurricane is headed toward Trump’s properties, which has drawn the scorn of some conservatives. 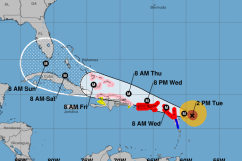