Hugh Hefner’s death from natural causes at the age of 91 poses the obvious question: Who will run Playboy Magazine now? What will happen to Hefner’s iconic magazine?

After all, Hefner, with his trademark jacket and Playboy Bunnies, defined Playboy. He was as much Playboy as Playboy itself. So, what happens to Playboy without Hef?

Hefner had already ceded editorial control of his iconic magazine due to his age. Indeed, his look-alike son, Cooper, is now running the creative side of the business (astute readers may remember that Hefner’s daughter, Christie, also ran Playboy for a time years ago. In 1988, Hefner named his oldest daughter, Christie Hefner, as CEO and chairperson of Playboy Enterprises, Inc. She served as CEO and chairperson from 1988 until 2008,” according to Cosmopolitan.)

Cooper Hefner is one of Hugh Hefner’s two children with his second wife, Kimberley Conrad, who was a former Playboy playmate.

In August 2017, Cooper spoke at length with The Hollywood Reporter about his plans for the magazine.

Hefner’s youngest son wants to make sure the magazine goes back to its initial essence: naked women.

Discussing advice I've been given and the future of the organization pic.twitter.com/L1DIzgKHBu

“Cooper Hefner has assumed creative control at the brand his father launched 64 years ago as he brings nude images back to the magazine while lamenting the company’s involvement in lowbrow licensing and reality TV,” the magazine reported, quoting Hefner’s youngest son as saying, “Nudity hadn’t been the problem — it was how it’d been presented.”

According to The Hollywood Reporter, the magazine’s new CEO Ben Kohn brought Cooper back into the fold after he left the magazine for a time due to “boardroom battles over the company’s direction.” Notably, reported The Hollywood Reporter, Kohn’s predecessor, Scott Flanders, made the decision “to forgo nudity in the flagship magazine’s pages in a bid for more mainstream respectability.”

“There was a lack of understanding of who we are,” Cooper told the magazine.

In a press release after his death, Playboy Enterprises said, “Hugh M. Hefner, the American icon who in 1953 introduced the world to Playboy magazine and built the company into one of the most recognizable American global brands in history, peacefully passed away today from natural causes at his home, The Playboy Mansion, surrounded by loved ones. He was 91 years old.”

Getty1962: Glamorous hostesses called ‘Bunnies’ at work in ‘The Playboy Club’, one of America’s most successful key clubs. The club is allied with publisher Hugh Hefner’s ‘Playboy’ magazine.

The Playboy organization revisited Hefner’s founding of the iconic magazine. “After serving in the Army, attending college and working for number of years in the magazine publishing industry, Mr. Hefner became convinced that there was a market for an upscale men’s magazine. By putting up his furniture as collateral for a loan and borrowing the rest from family and friends, Mr. Hefner published the very first issue of Playboy in December of 1953. The magazine was an instant sensation,” the magazine noted.

Cooper lauded his father’s life work in the press release.

“My father lived an exceptional and impactful life as a media and cultural pioneer and a leading voice behind some of the most significant social and cultural movements of our time in advocating free speech, civil rights and sexual freedom. He defined a lifestyle and ethos that lie at the heart of the Playboy brand, one of the most recognizable and enduring in history. He will be greatly missed by many, including his wife Crystal, my sister Christie and my brothers David and Marston and all of us at Playboy Enterprises,” said Cooper Hefner, Chief Creative Officer of Playboy Enterprises. 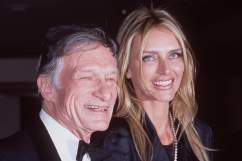 Loading more stories
wpDiscuz
0
0
Would love your thoughts, please comment.x
()
x
| Reply
Who will run Playboy Magazine now that Hugh Hefner has died? What will happen to Playboy? Learn more about the magazine's current path.