A prominent British neo-Nazi and longtime member of that country’s National Front renounced the 40 years he’d spent in the far right — at the same time he admitted he was gay and of Jewish background. Here’s five things you need to know about Kevin Wilshaw:

1. He’d Been Attracted to Nazi Ideals Since Age 11

In his interview with Britain’s Channel 4 news, Wilshaw showed a few of the decorative items in his apartment, including a Nazi flag and a bronze bust of Adolf Hitler.

When the interviewer asked Wilshaw “at what point did — well, Nazism — start to be attractive to you?” Wilshaw thought for a moment, then said “I must’ve been about 11 years old…. my father was very right-wing, and I think I took it a bit further than him.”

Wilshaw did not discuss specific dates or timelines, but according to HOPE Not Hate, a British non-profit that “campaigns to counter racism and fascism,” WIlshaw had belonged to the far right “since 1974 and even a little before.”

He admitted he hadn’t had many friends at school, and thought joining far-right groups would bring him a sense of “comradeship.” By age 18, he’d joined Britain’s far-right National Front party, and was a party organizer by age 20. He was particularly notorious (or just well-known) in Britain during the 1980s. Wilshaw’s original membership card, made out in the name of John Kevin Wilshaw, calls for “Racial preservation” and adds “Coloured Immigrants and their descendants must be returned to their lads of ethnic origin.”

2. His Mother Was Jewish

Despite Wilshaw’s father’s “very right wing” tendencies, he married a partly Jewish woman, Kevin’s mother. “Her maiden name was Benjamin,” Wilshaw said. “We do have Jewish blood in the family on that side.”

Under Jewish law, a child is considered Jewish if his mother was. Yet Wilshaw’s own background clearly did not prevent him from joining a political group dedicated in part to the notion that this very background made him an inherent threat. This might be largely due to the fact that Wilshaw’s physical appearance has nothing in common with anti-Semitic caricatures regarding what Jews “look like.” (His mother died in 2015.)

HOPE Not Hate reports that other aspects of Wilshaw’s family life were at odds with far-right doctrines: despite the official Islamophobia of British far-right parties (he was once arrested for vandalizing a mosque in Aylesbury), he has a close relationship with his sister, who married a Muslim man and converted to Islam in 1970, and is also close to her Muslim children.

3. He Wrote About his Hatred of “the Jews” on his Political-Group Application Forms

Here's Kevin Wilshaw from Aylesbury getting ready for Hitler's birthday next month… pic.twitter.com/tYYqzbOKbd

Wilshaw still has the application form he filled out decades ago to join a local British National Socialist (Nazi) group.

“I am of the opinion that the war against the enemies of my race (The Jews) needs to be waged on a global scale to be effective,” the interviewer read off the briefly visible form.

The interviewer mentioned the parentheses Wilshaw had put around “the Jews,” and asked whether he’d been thinking of his mother when he typed that. Wilshaw denied it, and explained: “That term ‘the Jews,’ you’re presenting a global, faceless mass of people, you know. You can’t personalize it. You can’t see an individual there. That’s—”

“Not even your mum?” the interviewer interrupted.

“No. And that’s the sort of generalization which results in six million people being deliberately murdered.”

4. He Didn’t Leave the Hate Groups Until the Hate was Directed at Him

After lifetime of Nazi activism Kevin Wilshaw wants to disavow it all for 1st time on #c4news tonight. Why? Clue: he's Jewish & gay! pic.twitter.com/xAbheTqsM9

While Wilshaw was able to resolve the contradictions between being partially Jewish while belonging to a prominently anti-Semitic organization, he had more difficulty reconciling his homosexuality with the homophobia espoused by his comrades — specifically, the homophobia directed at him.

“It’s a terribly selfish thing to say but it’s true, I saw people being abused, shouted at, spat at in the street – it’s not until it’s directed at you that you suddenly realize that what you’re doing is wrong…. I feel appallingly guilty as well, I really do feel guilty. Not only that, this is also a barrier to me having a relationship with my own family, and I want to get rid of it, it’s too much of a weight.”

He told HOPE Not Hate that he started to seriously doubt his life and stated political ideals last Christmas: “Everything was just feeling so empty and so pointless but I just had no idea how I could walk away from these people, these degenerate Nazis.”

5. He now Wants to “do Some Damage” to Far-Right Causes

Having left the far-right political sphere where he’d spent almost his entire life, Wilshaw now says he’s dedicated to fighting them. “I want to do some damage as well, not to ordinary people but the people who are propagating this kind of rubbish – want to hurt them, show what it’s like for those who are living a lie and be on the receiving end of this type of propaganda. I want to hurt them.”

The John Kevin Wilshaw Twitter account has been deleted (though the biography is still visible on Google search results: “Bitter, angry old Nazi with a pathological hatred of lefties, liberals, multi racialists, a certain influential group…”) 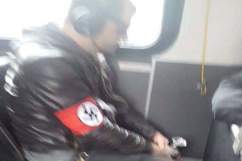 Loading more stories
wpDiscuz
0
0
Would love your thoughts, please comment.x
()
x
| Reply
A notirious British neo-Nazi renounced his views after outging himself as a gay man with Jewish ancestry.