Harriet Brookes sent out a group text to her friends, claiming to be Madeleine McCann, a girl who has been missing since 2007. Brookes’ messages caught the attention of thousands of people after one of her friends shared the texts on Twitter.

McCann went missing when she was almost 4 years old. She was staying at  Praia da Luz in Portugal with her parents and siblings at the time, but disappeared in the evening after her parents put her to bed. The mystery surrounding McCann’s whereabouts has been a hot topic on and off for a decade. Over the years, police have received numerous tips and thousands of people have said they’ve seen the child, but the mystery remains.

As you can probably imagine, Brookes’ claims didn’t go unnoticed and people have been quick to seek her out, wondering if she could really be McCann — especially because the two look so much alike. Brookes isn’t McCann, however, and admitted that she was only joking with her friends.

Brookes’ best friend Elizabeth a.k.a. Lizzie decided to share the texts with the public, posting them on social media. In the group text exchange, Brookes tells her friends that she “doesn’t believe in conspiracy theories,” but thinks that she is McCann, based on some qualifying similarities.

Brookes sent her friends some “evidence” supporting her claim. She sent them a couple of pictures that seem to oddly match a description of McCann that she found online.

For starters, Brookes says that her eyes match McCann’s eyes — one being green with a brown spot on the iris. In “exhibit B,” Brookes points out that she was a “brown spot on her left leg,” which was another similarity.

You can check out the text messages with the photos below.

W‌ithin minutes of Lizzie posting the above tweets on social media, thousands of people retweeted them. Although Lizzie has since-deleted her Twitter account, the posts are still circulating.

2. She Is a University Student from Manchester & Is Too Old to Be Madeleine McCann

Brookes is from Manchester, U.K., and is a student at the University of Leeds. A LinkedIn page appearing to belong to Brookes says that she is set to graduate from the school in 2019.

Perhaps the biggest piece of evidence that Brookes is not McCann despite the uncanny resemblance is her age. As a second-year university student, Brookes is in her late teens. McCann went missing in 2007 just days before her 4th birthday, which means she would be 14 years old today.

So, what made Brookes send the aforementioned messages to her friends? Well, she says that she was “looking through some old photos” and she started to notice a strange resemblance.

“Basically I was just looking through old photos and found the picture and was like ‘this reminds me of something but idk what’ and then I was like ‘sh*t it’s Madeleine McCann.’ … The facial features look very similar and the hair, and I Googled distinguishing features and the main two I have as well ahahah. Brown spot on her eye and brown spot on her leg,” Brookes told The Tab.

3. Brookes Says She’s Been Receiving Threats Over Her ‘Joke’

As for why Brookes decided to send these messages to her friends, she says that she was just trying to be funny.

“I just sent it for a joke,” Brookes told The Tab. She also talked to the outlet about the reactions that people have had. Although some people have been very serious about Brookes’ claims, others have joked with her.

Brookes’ “joke” wasn’t funny to some social media users. Many people who have been invested in the whereabouts of McCann have spoken out, sending Brookes various messages, telling her that she should be ashamed of herself. Meanwhile, other people seemed to get the joke and commented in jest.

“I’m loving reading people’s reactions. I feel like so many people are taking it seriously. I got a message from some girl saying she was going to skin me. She said I’m ‘twisted.’ I’ve also had jokey ones from people saying ‘your parents are worried.’ With over 100k likes and counting, inevitably the Internet has plenty to say on the situation, with many trying to crack the case themselves in never ending debates over left legs and right legs,” Brookes added.

All in all, it seems as though social media is split on their opinions about Brookes’ “joke.”

4. She Seems to Be Handling the Attention Just Fine

Brookes seems like a normal teenager, based on her social media accounts. She has a lot of photos with friends and often shares memories of their time together, whether it be nights out on the town or trips around the world (she recently posted a photo to Instagram showing a trip she took to the Great Barrier Reef and Whitehaven Island).

Brookes also attended Ariana Grande’s One Love Manchester concert back in June. You can see a photo from her experience below.

Unsurprisingly, Brookes is getting a lot of attention on social media this weekend. One would think that getting so much attention would have some kind of effect on a person. However, she seems to be handling things just fine. When asked if she had been contacted by news outlets for comment on the tweets, she said that her friend Lizzie had but that she “ignored them all.” The Tab also asked Brookes if there was anything she wanted to say to Lizzie after becoming internet famous.

“It’s the other way round. I made her famous,” Brookes said, with a laugh.

5. Her Messages Have Not Received Any Kind of Response from McCann’s Parents

Kate and Gerry McCann are still actively trying to find their daughter. Earlier this year marked the 10-year anniversary since Madeleine went missing, and it wasn’t an easy month to get through. The couple posted a joint message on their website explaining their feelings.

“We are bracing ourselves for the next couple of weeks. It’s likely to be stressful and painful and more so given the rehashing of old ‘stories’, misinformation, half-truths and downright lies which will be doing the rounds in the newspapers, social media and ‘special edition’ TV programs.”

“Media appearances are draining and on occasion, unhelpful to the only thing we want, finding Madeleine. They need to have a purpose. We could spend all our time and energy trying to defend ourselves by correcting inaccuracies and lies, but then we would have no strength left to look for Madeleine, look after our other children and to live our life.”

“I truly hope that those reporting on the ‘story’ over the next couple of weeks will have a conscience. Even if little consideration for Gerry and me is shown, they will at least bear in mind the effect such unfounded and unwarranted negativity could have on our other children – and of course Madeleine.”

“Thankfully, there is an active police investigation to try and find Madeleine and bring her abductor to justice. There are no new appeals that the police wish to make at this moment in time and so we are keeping any media involvement marking this unwanted milestone to a minimum.”

This is the last post that the McCann’s wrote on their blog. Neither Kate nor Gerry has responded to Brookes’ “joke.” 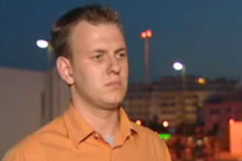 Loading more stories
wpDiscuz
0
0
Would love your thoughts, please comment.x
()
x
| Reply
Harriet Brookes made a joke that she was Madeleine McCann. One of her friends shared the messages on social media and they went viral.