Authorities have identified a body found off of Riverdale Road in Adams County, Colorado, as that of missing 19-year-old Natalie Bollinger.

Bollinger, of Broomfield, went missing Thursday following a conversation with a family member, and police were subsequently contacted as loved ones grew concerned over the teen’s safety.

Update: The body found this weekend in Adams County is now confirmed to be 19-year-old Natalie Bollinger. Investigators ask anyone with information about the whereabouts of Natalie after 1:00pm Thursday, December 28 to please contact the ADCO @ 303-654-1850 or 303-288-1535. pic.twitter.com/v9VpdNxNjJ

According to authorities, Bollinger’s body was found on Friday, and her body was identified on Tuesday, January 2. Her death is being treated as a homicide.

The woman took out a restraining order on Shawn Schwartz only days prior, and professed her concerns about the man via Facebook.

Schwartz continually uploaded videos to social media claiming that he is innocent of any wrongdoing regarding Bollinger, and he had not been named as a suspect in her death at the time of publishing.

Heavy spoke with Schwartz, who again proclaimed his innocence and said he was merely friends with Bollinger, adding that he “needs an advocate” after being harassed for over a year.

Heavy also reached out to a woman who knew both Bollinger and Schwartz, and stated the victim often “hung out with homeless people,” which included Schwartz.

1. Bollinger Took Out a Restraining Order on Schwartz Just Days Before Her Body Was Found, & Schwartz Said He Has ‘No Idea’ What He Did to ‘Deserve This’

According to Broomfield News, Bollinger was granted a protection order against Schwartz, 37, on December 22.

Schwartz said he was “still trying to stay out of the way and let the cops do their jobs,” the news site added.

On December 13, the victim posted to Facebook about concerns regarding Schwartz, and said he was continually harassing her, adding that he even “drove across country” to see her. She wrote:

Hey y’all, I have a public announcement…there is a man Shawn Schwartz. I met this man when I was young. I ran into him about 2 years ago. Long story short, I became friends w him. I helped him out w rides and stuff. I moved to VA.

He drove across country to see me.. slept behind my work for weeks. When I told him I didn’t want to see him anymore, he sent me hundreds of texts and calls. He parked his car in front of my house, blocking Military Highway for hours… laying on his horn.. he was arrested.

Since then, I’ve asked him to leave me alone.. and he won’t. He’s sent emails for over a year close to everyday, harassing me. Making numerous account until I block him again. Threatening my family, telling me he’ll kill himself in front of me, and sending my friends and family harassing messages as well.

I’m sharing this because, he’s posting slander about me all over FB. So, if you receive a message… I am sincerely sorry. Please ignore him… it only encourages him when he gets a response (much like a child). He’s mentally ill and I’m trying to fix this.

No suspects have been named in the case, police told reporters January 3 at a press conference.

“We have talked to him, and again not ready to call anyone a suspect. But it is certainly a piece of our investigation, a piece of our timeline,” Adams County Sheriff Michael McIntosh stated.

Heavy spoke with Schwartz, who expressed that he is need of legal assistance and said he isn’t understanding what he did to “deserve this.”

“I have no idea what I did to deserve this,” Schwartz told Heavy. “I have a flip phone that proves I was invited to Virginia by Natalie. I have been trying to get the harassment against me to stop for over a year…I need legal assistance, an advocate.”

Schwartz added that he went to Virginia after Bollinger said she wanted to kill herself, and said she got a restraining order against him because he was going to “expose her family.” He told Heavy:

I told her that if she didn’t stop the harassment against me, I would expose people in her family. And that’s what prompted her to do it…she’s been threatening with a restraining order for over six months. I have also been trying to get help for over six months.

In Virginia we had a lot of fun…I held her hand once, but that was it. We had no sexual relationship, I was her friend. I went to Virginia because Natalie got into a car accident within 24 hours of telling me she wanted to kill herself. That’s why I went there. We were friends.

2. Schwartz Is Adamant of His Innocence, & Is Continually Posting Updates Regarding the Case to Facebook

Schwartz has taken to Facebook to proclaim his innocence regarding any involvement in the death of Bollinger.

“I didn’t kill anyone,” he wrote, adding that Bollinger was “nice” to him.

On December 31 he asked readers to “Go f**king find Natalie” rather than try to contact him for information. He stated:

I am stressed the F*ck out. I got ‘friends’ wanting ‘info’ so they can ‘defend’ me on facebook. Stop. F*ck facebook. Go F*cking find Natalie. The cops are doing their jobs, and although I don’t know much except what I am told, the cops made it seem like they were still looking for her, they told me they found a body but that they didn’t know who she was. Natalie has identifying tattoos.

I have had a bunch of folks tell me she is dead then she isn’t then she is then she isnt. Let the cops do their jobs. Help find Natalie. I have severe panic attacks just thinking about facebook, I keep getting on messenger so I am not overwhelmed, but you guys are as***les and it’s not helping.

On January 2, he called Bollinger a “hero.”

“If Natalie were an ugly hobo, you wouldn’t give 2 sh*ts about her,” he posted to Facebook. “To you, she would be a ‘junkie’ who ‘wanted, needed, or deserved it or it didn’t happen’ but to me, she was a hero. Not because she was pretty. Because she was nice to me when everyone abandoned me for words on facebook. You are superficial monsters and I hope all the wishes you sent my way are visited upon you by whatever god you pretend to believe in.”

In numerous posts, Schwartz posted phone numbers to contact police with any information.

3. He Wrote: ‘I Want to Blow My Head Off in Front of You so Close You Can Feel the Warm Splatter of My Blood on Your Face’ & Stated He Suffers From Asperger’s Syndrome

“Natalie, I only wanted the best for you. Now all I want is for you to go through the hell I have lived,” Schwartz posted to Facebook on September 10. “I want to blow my head off in front of you so close you can feel the warm splatter of my blood on your face…,” he continued.

In the above video, Schwartz stated that he receives “$705 a month for having Asperger’s.” He speaks about having found a body in the same film, though further information regarding the alleged incident is not known at this time.

Schwartz commented that the “Cops scratched me off of their list,” and asked readers to help find Bollinger.

Schwartz told Heavy that he needs legal help, but said he is worn out from trying to find it himself and explained that having Asperger’s isn’t helping matters. He stated:

I need an advocate, but I have tried for over a year and so far nobody is willing to help me. And it’s hard for me to communicate that. Imagine if you have your TV on with a white screen, with just the fuzz, and you turn the volume up full blast. Try having a conversation like that. That’s my life.

4. Many Have Expressed That Schwartz Isn’t ‘Capable’ of Killing & Officials Do Not Believe There’s a Danger to the Public

Months before her death, Schwartz often posted online about Bollinger, even creating the above sketch of the woman last year.

Though police have yet to name any suspects in Bollinger’s death and despite the order of protection, many have expressed they do not believe Schwartz to be capable of killing the woman.

Heavy spoke with a woman who said she knew both Bollinger and Schwartz.

“I don’t think he’s capable,” Megan Nicole told Heavy. “I know his Facebook posts and stuff seem crazy, but he’s really a teddy bear…not to mention he’s not a very big guy. 5’7 at best and skinny…I mean she was also very, very tiny but still. This is a guy who had nothing himself but would still give his last of what he did have to another…murder is so far-fetched for him.”

The woman told Heavy that Bollinger first met Schwartz when she was “about 14,” and though she wasn’t homeless herself, the victim hung out with people who were. Nicole stated:

We met at the public library in Boulder. We called it ‘the park’ and a lot of us, including Natalie and her sister, would go down there and just smoke weed with all of the homeless people down there. It was the hangout spot and Shawn was one of the homeless that would be down there. She [Bollinger] was lost. I told her and her sister they needed to go home. Because they would roll around with all of the homeless men and I knew they preyed on them. They were way young, about 14. I was a little older at the time and didn’t think they should be hanging around with them. I would go home at the end of the night but Natalie and her sister would sleep outside with them and stuff.

“I don’t think there is a concern to this community,” the sheriff told reporters at a press conference on Wednesday, not elaborating on the circumstances of why.

5. Police Are Asking for the Public’s Help to Solve the Case

Victim’s advocates are currently working with Bollinger’s family and released a statement on their behalf.

“On behalf of Natalie Bollinger’s family, we would like to thank our friends and the community for the outpouring of support during this incredibly difficult time,” the statement reads, in part. “Our family has been deeply devastated by the loss and cannot fully express how much we miss our beautiful Natalie. Our hearts are absolutely broken.”

A GoFundMe campaign has been set up to help Bollinger’s family during this difficult time. You may donate by clicking here.

This post will be continually updated as information becomes available, please check back. 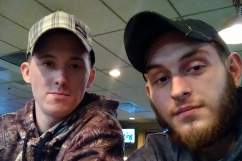 Loading more stories
wpDiscuz
0
0
Would love your thoughts, please comment.x
()
x
| Reply
Police identified a body as that of Natalie Bollinger, who was missing in Colorado. The woman had previously taken out a restraining order on Shawn Schwartz. Click here for the latest developments.