Joseph DeAngelo, the California man who is accused of being the serial killer known as the Golden State Killer, has three children with an attorney he married in the 1970s and was considered a “good father” by a relative.

Early descriptions from neighbors and relatives to local media also paint a picture of DeAngelo as an angry man who was a recluse, although they expressed surprise to learn that authorities suspect he’s one of the state’s most feared and terrifying killers.

Also dubbed the Original Night Stalker and the Visalia Ransacker, the Golden State serial killer is alleged to have committed 13 known murders and at least 45 rapes between 1975 and 1986. DeAngelo was arrested Wednesday morning, April 25, 2018, and he was charged with four of the murders, two of them in Sacramento and two in Ventura. He’s a Vietnam veteran who is a former police officer.

That has a lot of people wondering about the suspect’s wife, children, and other family members. You can see a more recent picture of Sharon Huddle practicing in court here.

The announcement states that DeAngelo’s parents were Mrs. Jack Bosanko of Garden Grove and Joseph J. DeAngelo of Korea. According to a 1973 newspaper article from The Exeter Sun, DeAngelo was born in Bath, New York, and his mother’s name was Kathleen. She died in 2010, and his father died in South Korea in 1995.

According to an old newspaper article from 1944 in the Star-Gazette, the suspect’s father, Sgt. Joseph DeAngelo, was awarded seven clusters to the Air Medal for meritorious achievement. His 15th Army Air Force unit holds a presidential citation for the “low level attack on the Ploesti oil fields in Romania,” the old newspaper article states. “The top turret gunner received the decorations in a ceremony on an Italian airfield. He has flown in raids on targets in Italy, France, Austria and Germany.”

The obituary for Kathleen Louise Bosanko says she was 87 when she died and left behind four children, one of whom was Joe DeAngelo. “She was a beautiful person and a wonderful Mother,” the obituary says. Her headstone refers to her as “Ramblin Rose.”

This is the wedding announcement for the suspect’s parents:

After graduating from Folsom High in 1964, DeAngelo served in the Vietnam War. According to The Sacramento Bee, a former neighbor named Doug Burgarel said that DeAngelo moved to rural Auburn with his mother and stepfather when he was a teenager. “DeAngelo’s stepfather worked for Burgarel’s father at Sierra Crane and Hoist as a welder making indoor overhead cranes,” reported the newspaper. According to the Bee, DeAngelo had a brother and his mother worked as a waitress at Denny’s.

72-year-old Joseph James DeAngelo who has been accused of being #GoldenStateKiller #EastAreaRapist #originalnightstalker #VisaliaRansacker used to be a Exeter Police officer, according to The Exeter Sun newspaper. DeAngelo accused of rape & murder in 70s & 80s. pic.twitter.com/ytdBXC6AZT

DeAngelo worked as a police officer in Exeter, California in the early 1970s, the sheriff said, and he worked for the Auburn Police Department through the late 1970s, although he was fired in 1979 “after he was charged with stealing a hammer and dog repellent from a Citrus Heights drug store,” The Auburn Journal reported.

Sketch of #EastAreaRapist aka #GoldenStateKiller on the right, suspect Joseph James DeAngelo Jr (in the late 1970s) on the left. What do you think?
Source: https://t.co/QaUlsjrzUw pic.twitter.com/pO5aKN5zi4 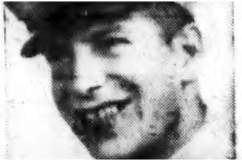 The wedding announcement between DeAngelo and Huddle.

DeAngelo appears to have had at least two significant romantic relationships that both fractured. He married Sharon Huddle, an attorney, in 1973. It appears from archived newspaper articles that DeAngelo was married only that one time, to Sharon Marie Huddle. Some news stations reported that DeAngelo divorced Huddle in 1991, but others said the couple is estranged but technically still married.

“A law enforcement source tell me the suspected East Area Rapist, Joseph DeAngelo, is still technically married, though estranged from his wife,” Tom Miller, a KCRA reporter, wrote on Twitter.

An old wedding announcement in The Sacramento Bee newspaper, which you can read in full above, confirmed the marriage between Huddle and DeAngelo, which took place in the fall of 1973.

The wedding announcement says that the Auburn First Congregational Church served as the setting for the marriage of Sharon Marie Huddle and Joseph James DeAngelo Jr. It states that she is the daughter of Mr. and Mrs. Clarence Huddle of Citrus Heights. She was listed as a graduate of San Juan High School and American River College.

According to archived newspaper articles and public records, DeAngelo appears to have been engaged to be married in 1970 to another woman, but he did not marry that woman, although the circumstances are unclear. Her Facebook page says she currently lives in Sacramento. DeAngelo and that woman both attended Sierra College.

3. DeAngelo Has Three Daughters, Including One Who Is a Doctor

Sacramento Sheriff\’s OfficeJoseph James DeAngelo pictured in a mugshot after his arrest, next to a FBI sketch of the East Area Rapist and Golden State Killer.

According to online records, one of DeAngelo’s daughters is a doctor in the Midwest. Another of his daughters is a PhD candidate at a university. The latter daughter is a graduate teaching assistant who wrote online that her research “is centered around understanding how unique message characteristics affect information processing in online environments.”

This daughter, who once worked for her mother’s law firm, also has done volunteer work in the community, including helping with youth baking projects for 4-H and preparing events for the American Lung Association. She’s taught or assisted in teaching a slew of courses at a California university in communication, public speaking, and media messaging.

The accused killer’s granddaughter’s Facebook page is filled with typical shots for a teen, including selfies and a cover photo of doughnuts.

In a press conference on the case, authorities confirmed that DeAngelo has adult children and was married, but they did not provide other details of his family other than to reveal that they have interviewed some of his family members. They did not specify which ones.

Some people who knew DeAngelo described him as an angry man, including when his daughters were young. One neighbor, Cory Harvey, told the Sacramento Bee that DeAngelo lived with a daughter and granddaughter, and she thought he was divorced.

Sharon Huddle has a law firm that specializes in family, divorce and real estate law, according to its page on Yelp. The Yelp page featured a scathing but unverified review about Huddle.

According to the California State Bar, Sharon M. Huddle has an active license to practice law in that state. She was admitted to the bar in 1982, was inactive for 8 months in 1987, and then was active again. She practices in Roseville, California, and has no disciplinary actions on her license. She attended McGeorge School of Law, University of the Pacific.

Miller, of KCRA, reported on Twitter: “Seeing some rumors on social media that the suspected East Area Rapist’s family turned him in. Just checked with @sacsheriff and am told that’s ‘100% unequivocally not true.'”

Grant Gorman, who grew up in the neighborhood where DeAngelo lived, told the Bee that he “avoided playing with one of DeAngelo’s daughters while they were young” because DeAngelo had an anger management problem.

“This guy just had this anger that was just pouring out of him,” Gorman said to the newspaper. “He’d just be yelling at nothing in the backyard, pacing in circles.”

For years, it was believed that the Golden State Killer might be married with kids after a surviving victim received a call in which a woman and children were heard in the background.

“Oh my goodness. Wow. I’ll have to process this,” he told the site of DeAngelo’s arrest. However, he also revealed that DeAngelo once brought up the serial killer.

“He actually asked me about it once. He said, ‘What do you think of that East Area Rapist? What would you do, Jim?’” Huddle said to Oyxgen. “(The case) was a big deal at the time. We were all concerned about our families.”

His sister, Rebecca Thompson, told The Bee that she was shocked by his arrest, saying, “As stunned as I am – because I’ve never seen him display any kind of madness or anything like that – I just can’t believe it. I’ve never seen anything to allow myself to think he could do such things.”

However, Kevin Tapia, a former neighbor, told CNN that “neighbors could often hear DeAngelo yelling in his home. In recent years, he said DeAngelo had become a recluse, sometimes yelling at neighbors for minor annoyances, like mowing the grass too early in the morning.”

“In 1978, a couple was shot and killed while walking their dog in Rancho Cordova. Evidence left at the scene was indicative of the EAR/GSK,” the FBI’s wanted poster reads on the Golden State Killer. “After this crime, the EAR/GSK committed rapes in Stockton, Modesto, Davis, and the East Bay Area of California. Between 1979 and 1981, he was involved in the rape and murder of several individuals, including couples, in Southern California. These victims were tied up in the same manner as the Sacramento area rapes and their homes were also ransacked. After July of 1981, no additional incidents related to the EAR/GSK were reported until the rape and murder of an 18-year-old girl occurred in Irvine, California, in May of 1986. This was the last known incident related to the EAR/GSK in California.”

The crimes have chilling details. According to The New York Times, the killer “placed a teacup and saucer on the bodies of some of his victims and threatened them with murder if he heard the ceramic rattle.”

In another case, according to the New York Daily News, DeAngelo “used a fireplace log to bludgeon” a couple to death.

Loading more stories
wpDiscuz
0
0
Would love your thoughts, please comment.x
()
x
| Reply
Joseph James DeAngelo was named as the suspect accused of being the Golden State Killer and East Area Rapist. Learn about his family, wife, and children.