FacebookThe son of Tiffany Griffin, Jesse, was apparently attacked while in the care of KiddieGarden daycare in Indianapolis.

Tiffany Griffin is outraged after being summoned Monday to KiddieGarden daycare in Indianapolis, Indiana, to find out her 1-year-old boy, Jesse, was apparently brutally attacked.

Heavy spoke with Griffin, who said she was told by her son’s teacher, Nyat Adhanom, that Jesse’s injuries were caused by a 2-year-old girl who also attended the daycare.

Griffin said the story “isn’t adding up,” and said the owner of the daycare isn’t being truthful.

No arrests have been made, though the location where the incident happened was closed down in an emergency order by the state, and an investigation into the incident is ongoing.

1. Griffin Said She Was Told the Injuries Were Caused by a 2-Year-Old Girl at the Daycare, Though Her 3-Year-Old Son Blamed the Teacher 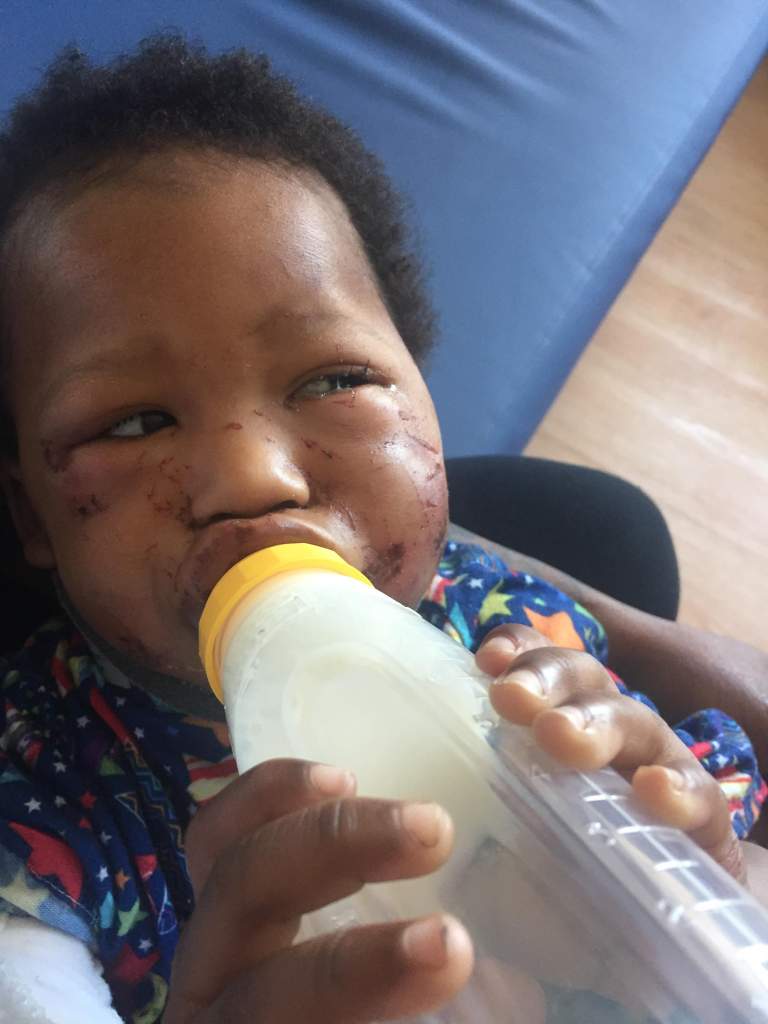 According to Griffin, she was told her son was attacked by a 2-year-old girl from the daycare center April 30, where she said four children were being cared for by Adhanom.

“I don’t want to speculate, but all I can think is, ‘how could a 2-year-old really do that much damage to my child?,'” Griffin said. “The injuries are horrible, it’s sickening and sad to watch Jesse have to go through this.”

Griffin said another son who attended the daycare told her the teacher had caused the injuries.

“I asked my 3-year-old son what happened to Jesse, and he said, ‘Ms. Nyat did it, Ms. Nyat did it!,'” Griffin told Heavy. She continued:

If that little girl hit my son, or pushed my son, or bit my son…then Nyat would’ve heard my child scream the first time. And she would have went and stopped it, and she would’ve separated them right away. Her story isn’t adding up with Jesse’s injuries. And I actually punched her when I came to pick up my baby, because I was in shock and she’s lucky it wasn’t worse…it’s hard to describe what comes over you when you see your child like that.

Not only that, they’re saying the 2-year-old just got into Jesse’s crib and harmed my son with her bare fists? So was she just sitting on top of my son, pounding his face? The door was supposedly cracked, it would’ve taken too long for him to get hurt that bad without her coming in to stop it before it got so bad.

I mean, was Nyat out of the building? She’s covering up so many lies that I don’t know what to think. I trusted Nyat and I wouldn’t ever think she could do something like this, and again I don’t want to speculate, but things just aren’t adding up. I want her to get a lie detector test, and that isn’t too much to ask. This is my baby.

And when she called me, I couldn’t hear Jesse and she didn’t act like much was wrong. Then when I got there I heard him screaming all the way outside and that doesn’t make sense either. She didn’t even call an ambulance, police, nobody.

The little girl had blood on her, but who’s to say Nyat didn’t put blood on her, or that the owner didn’t tell her to in order to cover it up?

Though Griffin said she was told by daycare workers that the 2-year-old girl they say caused the injuries could at times be aggressive, the girl’s mother didn’t appear to believe she could be capable of the harm inflicted onto Jesse.

When Griffin asked the girl’s mother if she had a history of violence, the woman said her daughter “may be capable of scratching, but she didn’t think to that extent,” Griffin stated.

Additionally, Griffin expressed concern that she had noticed her children didn’t seem happy at the daycare and she had given the center two-week’s notice.

“This was their last week at that daycare,” Griffin said through tears. “I have three kids there and I was taking them out because I was worried. They didn’t seem happy and my 3-year-old never wanted to go or be there. I just wish I had removed them at the first sign.”

2. Griffin Said the Owner of the Daycare Is Giving Conflicting Accounts of Events, the State Has Shut Down the Location Where Jesse Was Abused, & Previous Violations Were Noted 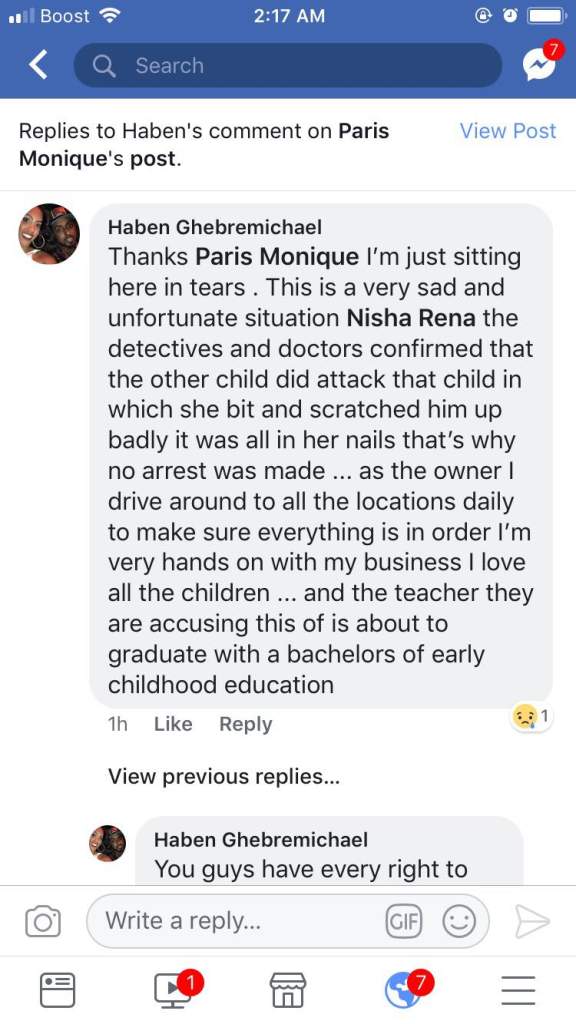 A screenshot provided to Heavy by Griffin which she says gives conflicting accounts of what happened by the daycare’s owner, Haben Ghebremichael.

Griffin provided the above screenshot to Heavy, which she says proves the owner of the daycare center, Haben Ghebremichael, was giving inaccurate information which she said has only made it that much harder to trust the daycare on their version of events.

While Griffin stated authorities and doctors are still investigating and it has not yet been determined who the injuries are from, the daycare owner initially insisted that wasn’t the case.

In response to a woman on Facebook, Ghebremichael said:

…I’m just sitting here in tears. This is a very sad and unfortunate situation…the detectives and doctors confirmed that the other child did attack that child in which she bit and scratched him up badly it was all in her nails that’s why no arrest was made…as the owner I drive around to all the locations daily to make sure everything is in order I’m very hands on with my business I love all the children…and the teacher they are accusing this of is about to graduate with a bachelors of early childhood education.

Ghebremichael told The Associated Press that a 2-year-old girl attacked Jesse and said the girl had blood on her hands afterwards. While she alleged the girl was known to act out, she stated on Tuesday that, “the extent of the injuries just blows our minds.”

Ghebremichael later made another statement via her Facebook account on Tuesday, which has since been deleted. It read:

We are deeply saddened about what took place yesterday afternoon to Jesse. We at Kiddiegarden pride ourselves on not only providing quality service to families, but also providing a clean, safe and healthy environment for all of our children since we opened our doors three years ago. Kiddiegarden has never had any accusations of abuse or maltreatment from any of our children or parents.

This was truly a sad, shocking and unfortunate event. We have been diligently working with law enforcement, child protective services, as well as state agencies on this matter. We have been fully cooperative and transparent with law enforcement to complete their investigation. Our hearts go out to Jesse and his family and are praying for his well being. Due to this still being an ongoing investigation, we are not at liberty to disclose any further details.

We have confidence in the detectives who are handling the investigation to give us a final report of the incident, which will be made public. At that time we will make another statement addressing the matter.

According to The Indy Channel, a letter from “FSSA spokesperson Marni Lemons indicated that an order was put into place to stop operations at the Kiddie Garden Daycare, at 1853 East 38th Street in Indianapolis, right away.”

A letter stated that conditions within the daycare, which is located in a home, “pose an immediate threat to the life and well-being of the children” at the facility, the news outlet reported.

In addition, the letter acknowledged that Jesse was injured “due to a lack of supervision” at the home.

While Ghebremichael owns two other KiddieGarden daycare centers on the east side of the city, those licenses are not being impacted at this time, Lemons told The Indy Channel.

Though Ghebrimichael made claims that the company has never had maltreatment or abuse complaints, inspection records on the Indiana Family & Social Services Administration (FSSA) website show that violations were found in November 2017 and December 2016 at a location identified as 46226, though the website doesn’t list specific addresses of home care centers, citing safety reasons.

Multiple violations were found for 46226 including a lack of working smoke detectors, no drug testing being done, a lack of drug tests for two employees, not following proper child-to-staff rations, and mold that was found in the basement.

At another location, identified as 46218, an FSSA inspection from March of this year showed the provided hadn’t shown proof of a drug screen.

3. Griffin Said Police Are Only Saying ‘They’re Investigating & Jesse Is OK From the Neck Down’, & the Boy Is Currently Hospitalized

According to Griffin, police are not elaborating on any details at this point.

“The police are not saying anything right now other than Jesse is ok from the neck down,” she said.

Griffin added that the toddler is currently hospitalized and was given an MRI on Tuesday. On Wednesday, she was told there were “no traumatic injuries found with Jesse’s head.”

“He seems to be a little better, but it’s still hard to know the full damage,” she stated.

Indianapolis police spokesman Officer Aaron Hamer confirmed to the AP on Tuesday that no arrests have been made and detectives are investigating.

4. Griffin Is ‘Just Thankful Jesse Is Still Alive’, & the Story Is Going Viral 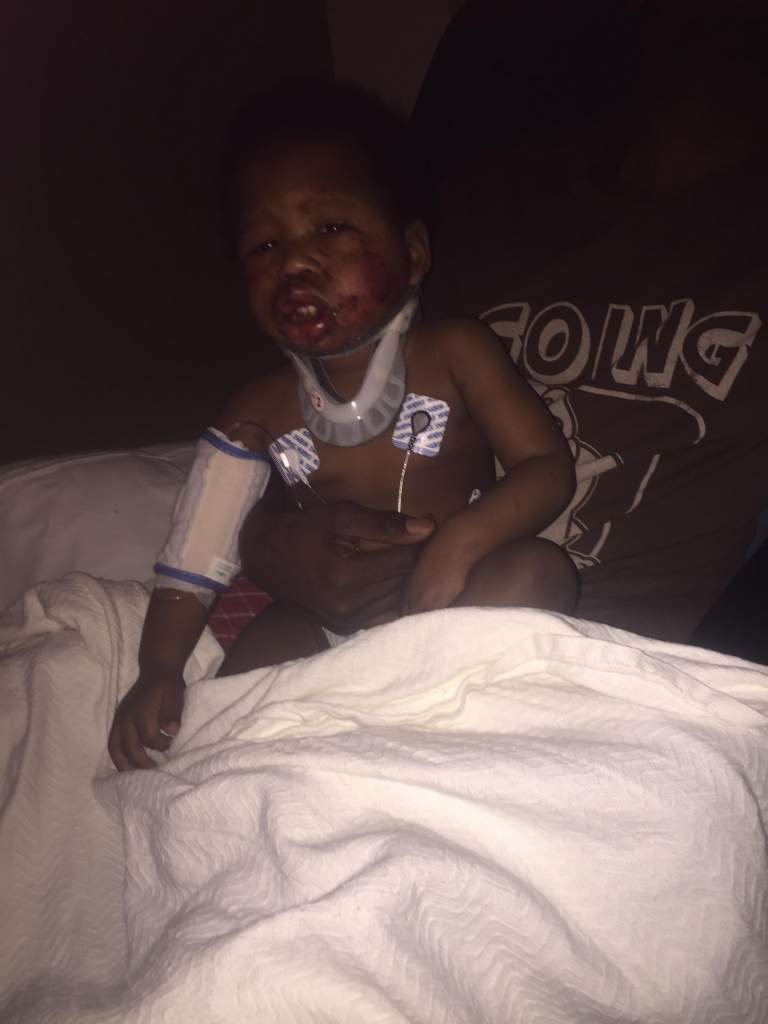 Griffin was awaiting the results of an MRI of Jesse’s head as of Tuesday evening.

Griffin told Heavy that she is “just happy Jesse is alive,” and said the situation could’ve been “much worse.”

“It’s not a blessing of course, but it is a blessing that my son is alive still,” she said. “To have those injuries and still be alive, we are just lucky that he’s still here with us. We just need justice now.”

5. Griffin Has Organized a Fundraiser for Abused Children Along With a GoFundMe Account, & Her Fiance Who Serves in the U.S. Army Won’t Likely Be Able to Deploy

Griffin would like donations to be made for abused children in the state of Indiana.

Despite already being disabled, Griffin said she would like donations to be made in her son’s honor via a Facebook fundraising page to assist abused children in the state of Indiana.

In addition, the heartbroken mother, who is four months pregnant, is asking that anyone who is able make a donation to a GoFundMe account she created.

“We would appreciate anything, even $1.00,” Griffin stated, adding that though she’s not sure it will be possible, she would “love to use the money for a private investigator” into the incident or “to pay for a lie detector tests” for KiddieGarden staff members. In addition, Griffin would like to put any extra funds towards a tutor for herself, because she’s not comfortable putting her children back into a daycare setting at this point, and wants to continue striving to do her best in school.

Griffin and her fiance and Jesse’s father, Jesse Harris III, are losing money due to Harris being unable to work as Jesse IV recovers. She said Harris has served in the U.S. Army for over 10 years, and was set to be deployed soon, though she doesn’t believe the timing will work out with what is going on with their son. In addition to serving in the Army, Harris works for his family’s business.

“He’s afraid to deploy because he was going out of the country to serve and protect other children, but now he’s hurt because he feels he couldn’t even defend his own child,” Griffin said. “And honestly I don’t think he’ll be able to with the timing and Jesse recovering.”

Griffin is in her second year of college at Ivy Tech, and she also participates in a Healthy Start program aimed at reducing infant immortality in African American babies.

You may click here to donate to the GoFundMe page.

*This article will be updated as information becomes available, please check back. 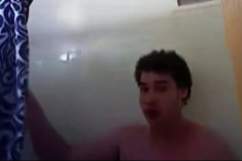