We heard statements from Michael Cohen, the longtime personal attorney and business partner to President Donald Trump, in an interview with Good Morning America Monday. Cohen’s statements to ABC included, “I will not be a punching bag in anyone else’s defense strategy.” He also said that his wife, children and the country have his first loyalty– not Donald Trump.

George Stephanopoulos said he asked Cohen in the off-camera interview about the payment to Stormy Daniels and whether he was instructed by Mr. Trump to make it. Cohen’s response was: “I want to answer. One day I will answer. But for now I can’t comment further” based on advice from his own attorney.

Michael Cohen tells me in first in-depth interview since FBI raids on his home and office that family and country, not President Trump, have his 'first loyalty'https://t.co/7r2aM9Tus5 pic.twitter.com/WyZ6IOyGL8

In @GStephanopoulos' exclusive interview with Pres. Trump's former personal attorney Michael Cohen, Cohen stays mum on commitment to his longtime client: “To be crystal clear, my wife, my daughter and my son, and this country have my first loyalty.” https://t.co/V7gE1FomMf pic.twitter.com/TPu7kkiOpJ

Known as the president’s “fixer,” Cohen has been under federal investigation for a $130,000 payment to adult-film actress Stormy Daniels in the days before the 2016 election. The Department of Justice also acknowledged back in April that Cohen’s business dealings had been under investigation for several months, when the FBI seized documents from Cohen’s home, office and hotel room.

Spent Saturday afternoon with @GStephanopoulos @abc (not on camera) interview for Monday’s @GMA. My silence is broken! pic.twitter.com/ed6WRYpvVA

This follows Thursday’s tweet in which Cohen stated: “My family & I are owed an apology. After 2 years, 15 hours of testimony before House & Senate under oath & producing more than 1000 documents, dossier misreports 15 allegations about me. My entire statement must be quoted- I had nothing to do with Russian collusion or meddling!”

My family & I are owed an apology. After 2 years, 15 hours of testimony before House & Senate under oath & producing more than 1000 documents, dossier misreports 15 allegations about me. My entire statement must be quoted- I had nothing to do with Russian collusion or meddling!

But last month, a source told CNN that Cohen may be willing to answer prosecutors’ questions about the president. The source told the network: “He knows a lot of things about the President and he’s not averse to talking in the right situation. If they want information on Trump, he’s willing to give it.”

President Trump has been putting distance between himself and Cohen ever since the FBI seized documents from Cohen’s home and office back in April. Following that search, the president did a phone interview with Fox and Friends in which he stated that Cohen did a “tiny, tiny little fraction” of his legal work.

Last month, President Trump told reporters at the White House that Cohen was not his lawyer anymore.

However, at least according to his twitter profile, Michael Cohen still thinks he’s working for the president. His profile reads “Personal attorney to President Donald J. Trump.” 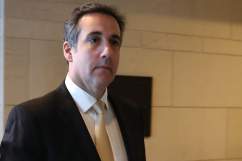 Michael Cohen’s Net Worth: 5 Fast Facts You Need to Know