Angel Perez, a 60-year-old man from New Jersey, is fighting for his life after contracting a flesh-eating bacteria while crabbing on July 2.

Perez recently opted to move to a long-term treatment facility rather than hospice, and is currently facing several amputations.

According to NJ1015, Perez contracted vibrio vulnisicus bacteria when he was crabbing in New Jersey. The infection reached his bloodstream and has reportedly turned his limbs black. To see photos of the effect of flesh eating bacteria on Perez’s body, you can see the gallery on DailyMail, but only if you’re prepared for graphic content.

Perez’s family has set up a GoFundMe to help cover the costs of Perez’s medical treatment, as he continues to fight for his life.

NJ father who contracted a flesh-eating bacteria is being transferred to a long-term care facility after infection spread https://t.co/GEmpYsXyoh

According to Health, vibrio vulnisicus bacteria, AKA ‘flest eating bacteria’, kills around 100 people every year. It’s found in brackish or salt water, and people contract it by entering that water or by eating raw contaminated seafood, like oysters.

2. A  Few Days After Crabbing, Perez’s Legs Started to Swell, Indicating the Bacteria

According to USA Today, Perez first noticed something was awry a few days after he had gone crabbing, when his legs began to swell and feel incredibly painful.

Perez soon went to the hospital, where doctors were able to diagnose his ailment as flesh-eating bacteria, which had spread to his bloodstream.

His daughter said of the affliction, “He is in critical condition…The infection has spread to his blood … his skin; you can see it spreading from his feet all the way above his kneecap. His forearms are black in color; they have blisters, cuts and sores.”

According to his GoFundMe, Perez is also battling Parkinson’s disease in addition to flesh-eating bacteria. His daughter explained that they decided to move him to a treatment facility over hospice because he wouldn’t be able to get kidney dialysis if he elected for hospice.

“While the idea of using a hospice facility was briefly considered, the decision was ultimately made that it wouldn’t adequately see to his most pressing needs,” Anita Wilson wrote in an update to the GoFundMe page.

She continued, “Through the strength of prayer and the love of his family, Angel Perez decided that he will continue to fight for his life. Haydee and Dilena are looking into a long term care facility that can attend to Angel’s unique and growing needs and as he continues this battle with this infection. Angel, Haydee, Dilena and the entire Perez family want to thank everyone for the outpouring of thoughts, prayers, and donations. It means the world to them especially during this difficult time.”

4. The Perez Family Has Set Up a GoFundMe to Cover Medical Costs for Perez

The Perez family are looking to raise funds for Perez’s medical costs during his extended hospital stay, and have currently raised $3,400 towards the $12,000 goal.

The GoFundMe story reads, “Loving father and husband Angel Perez is fighting for his life and limbs at the age of 60. After crabbing in Matt’s Landing, New Jersey he developed Vibrio Necrotizing Fasciitis , a flesh-eating bacteria that has caused him to be hospitalized since July 3, 2018.  This flesh eating bacteria in conjunction with Angel’s exsisting battle with Parkinson’s Disease has made this this taxing journey. We are raising funds to help pay for the medical bills, travel to and from the hospital, and other expenses associated with Angel’s hospital stay.”

5. Perez Was Initially Showing Signs of Improvement, Before New Infections Emerged a Few Weeks Ago

A New Jersey man is fighting for his life after catching flesh-eating bacteria while crabbing.

He may lose all of his limbs. https://t.co/DbECd52ezc

According to Perez’s daughter, Dilena Perez-Dilan, Perez was initially showing signs of improvement at the end of July when his condition took a turn for the worse.

New infections have spread down Perez’s limbs, causing gangrene to spread to Perez’s feet, hands and forearms, according to NJ.com.

“We weren’t aware of that,” Perez-Dilan said. “So we withdrew the choice of hospice and what we want to do is put him in a long-term care facility So as long as he feels strong and courageous to continue, then we are going to make his wishes be what they are.” 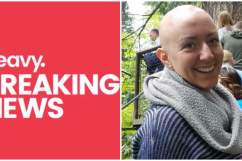