Chloe Wright was accused of targeting another driver for being a supporter of President Donald Trump. The victim, who spoke with reporters from WBZ-TV but did not share his name, said Wright slammed into the back of his SUV after seeing he had a Trump bumper sticker.

He recorded the incident on his phone. Wright was charged on three counts. The case now heads to a jury trial, which is set to begin in February 2019.

1. Chloe Wright Allegedly Followed the Victim, Honking Her Horn at Him Before Yelling That He Was a Racist

The victim told the Barnstable police that he was driving in the village of Hyannis when the incident occurred. When he stopped at a red light, the car behind him started honking the horn. He continued driving, and the other driver kept following him.

He stopped at a second red light. In addition to the honking, the victim also heard someone shouting. He told police that he thought something might be wrong with his vehicle, so he stepped out of the SUV to investigate.

He said at that point, he could hear the driver behind him yelling about his Trump bumper sticker. He later identified her as Chloe Wright to police. He said Wright asked if he had voted for Trump. He responded, “Yes, what of it?” He said that prompted Wright to hurl more insults and curse words at him, including calling him a racist.

2. Chloe Wright is Accused of Intentionally Ramming the Victim’s Vehicle and Nearly Hitting the Man

Chloe Wright is then accused of using her car to physically attack the victim. She must not have realized that the victim had taken his cellphone out and begun recording. He shared that video with Boston station WBZ-TV.

The victim said Wright repositioned her car and rammed the back of his vehicle. According to the police report, the victim says he stepped into the opening of the driver’s side door as she began driving around the side of his SUV. But she was not done. Wright then allegedly hit his open door, missing him by inches. He told police, “She bent my door and I had to lean back to avoid getting hit. She also hit the side of my car.”

After Wright drove away, he called Barnstable police. The victim’s girlfriend was in the passenger seat at the time, and backed up his statement to police.

3. Chloe Wright Was Identified as the Driver Through a License Plate Check

Chloe Wright is charged with assault with a dangerous weapon

Barnstable Police quickly arrived on the scene to investigate. When he was recording with his cellphone, the victim had managed to get an image of the car’s license plate. The video captured the moment the gray Honda Civic had hit his driver’s side door.

Police officers looked up Wright’s license plate number. That led to a driver’s license photo of 25-year-old Chloe Wright from Taunton, Massachusetts. Officers showed that picture to the victim, and he identified her as the attacker.

4. Chloe Wright Was Arrested A Month After the Incident

Chloe Wright of Taunton, Massachusetts was identified as the driver involved in the hit & run. The incident happened June 30 in the village of Hyannis, which is about 70 miles southeast of Boston.

Wright was arrested four weeks after the incident. Police picked her up in the town of Bourne in Barnstable County on July 30. State police did a random check of her license plate.

That random check revealed an open warrant on charges. Wright was taken into custody and later released on $1,250 bail. She was ordered to stay away from the victim.

5. Chloe Wright Could Face Several Years in Prison if Convicted

Chloe Wright’s was back in court November 30 for a pretrial conference. A clerk with the Barnstable County District Court confirmed to Heavy that the case is going to trial. The jury trial is set to begin February 7, 2019. Wright is being represented by defense attorney Scott David Bradley.

The charges against her include:

Chloe Wright was arrested July 30 and pleaded not guilty to the charges. Under Massachusetts law, assault with a dangerous weapon is a felony. If convicted, it carries a possible sentence of a maximum of five years behind bars or a $1,000 fine. 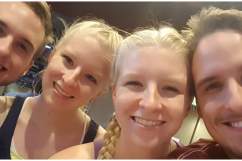 Loading more stories
wpDiscuz
0
0
Would love your thoughts, please comment.x
()
x
| Reply
Chloe Wright is accused of hitting another driver because he had a Trump bumper sticker on his car.