Patrick Michael Shanahan, who had been serving as the acting Secretary of Defense since January 1, 2019, and had been formally nominated for the permanent position by President Trump, has withdrawn his nomination and is stepping down.

On June 18, Shanahan addressed a domestic violence situation that had occurred in 2010 between him and his now ex-wife, Kimberley Jordinson. In a statement to USA Today, Shanahan insisted that he had “never laid a hand” on Jordinson and that he regrets that “my children’s privacy has been violated and they are being forced to relive a tragic situation that we have worked so hard as a family to put behind us.”

President Trump soon after announced via Twitter that Shanahan would be replaced by Secretary of the Army, Mark Esper. The president wrote that Shanahan had “done a wonderful job” and that Shanahan had made the decision to “not to go forward with his confirmation process so that he can devote more time to his family.”

Shanahan, who did not have any prior military experience, started working at the Pentagon in July of 2017 and led the team that drafted a proposal for a new Space Force. Shanahan made the transition to the Defense Department after spending three decades with Boeing.

Here’s what you need to know about Patrick Shanahan.

Patrick M. Shanahan has spent the majority of his professional career in the private sector. He went to work for Boeing in 1986. According to his executive profile on Bloomberg, Shanahan “progressed through a number of diverse assignments, including significant involvement in Computer Services and the Boeing 777 Program” in his early years with the company.

Bloomberg reported in August 2017 that Shanahan took steps to avoid any conflicts of interest after he left Boeing. He set up an alert system that would notify his staff members if an issue arose involving the company. Shanahan would not handle issues concerning Boeing.

.@SenJohnMcCain: "Do not do that again Mr. Shanahan or I will not take your name up for a vote before this committee. Am I perfectly clear?" pic.twitter.com/JNpIBkb9yB

Shanahan was nominated by President Trump to be the Deputy Defense Secretary in March of 2017. At the time, Senator John McCain told Defense News that it was a concern that Shanahan had never worked in the Pentagon before.

The Senate ultimately confirmed Shanahan by a vote of 92-7 in July 2017. But his road to confirmation was a bumpy one.

During the confirmation hearing, Senator McCain was visibly annoyed after asking Shanahan whether he supported providing military aid to Ukraine. Shanahan at first responded that he needed to look over the issue. Senator McCain said that the nominee had avoided answering the question. Shanahan changed his answer and said he did support arming Ukraine.

You can watch that exchange in the video embedded above. 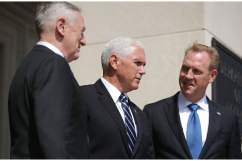 3. Shanahan Was Tasked With Implementing Reforms at the Defense Department

GettyUS Vice President Mike Pence (2nd-L) arrives to speak about the creation of a new branch of the military, Space Force, alongside US Secretary of Defense Jim Mattis (L) and Deputy Secretary of Defense Patrick Shanahan (R) at the Pentagon in Washington, DC, on August 9, 2018.

Patrick Shanahan was responsible for making internal reforms at the Pentagon after taking the job as Deputy Defense Secretary. In his position, he was the chief operating officer. The Defense Department explained in a profile on Shanahan that he was responsible for figuring out how to streamline the department’s processes and cut through red tape.

He spoke with Defense News in November 2018 about the challenges of implementing systemic change to make sure the Pentagon runs as smoothly and efficiently as possible. “It’s very easy in a complex environment like this to get distracted. The tactical can consume an enormous amount of time. But my job is really to drive change at scale, and there’s a formula for doing that. And the formula really has to do with a change that must be systemic. It’s all about the system and then the reinforcing mechanisms to make that change enduring. Without a system, things fall apart when the leader moves on. The system or the environment shouldn’t be dependent on the leader’s presence.”

Shanahan explained that one of his primary goals was to improve IT. He spoke about ensuring that the software the Pentagon relies upon can do “high-end computing” as quickly as possible. 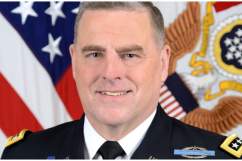 4. Patrick Shanahan Led the Pentagon Team That Put Together a Proposal for a Space Force

GettyUS President Donald Trump speaks as US Secretary of State Mike Pompeo (L) and US Deputy Secretary of Defense Patrick M. Shanahan look on during a cabinet meeting in the Cabinet Room of the White House on August 16, 2018.

In March 2018, President Trump talked about his desire for an independent Space Force at a rally. It would function as a separate military branch.

Patrick Shanahan was put in charge of the team at the Pentagon that began working out the logistics of how a Space Force would come together and function. In December 2018, Shanahan explained to Space News that the team was putting its finishing touches on the proposal. Shanahan said he did not have an estimate for much it would cost to launch a Space Force.

There is still a long way to go in the process. The National Space Council and Vice President Mike Pence were tasked with going over the proposal. Once that vetting process is completed, the proposal would then be sent to Congress. Shanahan said he would be “happy to take the red pen out” if members of the House and Senate Armed Services Committees recommended changes. 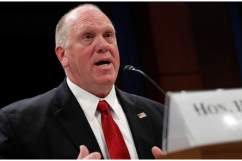 Patrick Shanahan is 56 years old. (His birthday is June 27, 1962). According to his Department of Defense bio, Shanahan earned a bachelor’s degree from the University of Washington. He majored in mechanical engineering.

He also earned two master’s degrees from the Massachusetts Institute of Technology. He has a Master of Science degree in mechanical engineering and an MBA from MIT’s Sloan School of Management.

Shanahan has three children, according to a New York Times profile in 2017. He is divorced. Friends of Shanahan’s told the newspaper that he has a “dry sense of humor and a taste for golf.” You can read more about his family by following the link below.

Loading more stories
wpDiscuz
0
0
Would love your thoughts, please comment.x
()
x
| Reply
Patrick Shanahan was the Acting Secretary of Defense and announced he was withdrawing his nomination on June 18, 2019.