Robin Rosenzweig, 59, is married to Elliott Broidy, the former deputy finance chair of the Republican National Committee and a fundraiser for President Trump’s campaign who has been under investigation by the Justice Department.

The non-profit investigative journalism outlet ProPublica reported on March 18, 2019, that federal authorities had raided Broidy’s Los Angeles office during the summer of 2018. The site obtained access to a sealed warrant that reportedly revealed that Broidy was accused of using his connections with the Trump administration for financial gains. The alleged crimes included money laundering, conspiracy, and illegal lobbying for foreign officials.

According to the report, Robin Rosenzweig’s firm, the Colfax Law Office, was included on a list of names the Justice Department was seeking evidence on.

Here’s what you need to know about Robin Rosenzweig.

1. Robin Rosenzweig Was in the Headlines in 2018 When Hackers Accessed Her Email

Robin Rosenzweig inadvertently handed over her password to online hackers in December of 2017. Bloomberg Businessweek explained that Rosenzweig received what appeared to be a security alert from Google and entered her password.

Hackers used this to access accounts belonging to her husband, revealing that Broidy had allegedly tried to use his ties to the White House for financial gain. The stolen emails were distributed to media outlets.

Broidy filed a lawsuit in March of 2018 against the state of Qatar, whom he believed was responsible for the hack. The Qatar embassy denied any involvement and claimed that Broidy was trying to “divert attention from U.S. media reports about his activities.”

The leaks also reportedly revealed an affair Broidy had with a Playboy model. In April of 2018, Broidy resigned from his position with the RNC after admitting to the affair and that the woman had become pregnant. He also acknowledged that Michael Cohen, President Trump’s former lawyer, had arranged a financial settlement of more than a million dollars to be paid to the woman, whom the New York Times identified as Shera Bechard. In exchange, she agreed not to speak publicly about the affair. The Times reported that Bechard had terminated her pregnancy.

2. Robin Rosenzweig is the President of a Technology Company & Runs a Law Firm in Beverly Hills

Robin Rosenzweig is a licensed attorney and has operations on both the east and west coasts. According to her Linkedin profile, she founded the Colfax Law Office in Beverly Hills in 2014, Rosensweig explains that she focuses on “corporate, entertainment and criminal law.” A search of public records on the California Secretary of State’s website shows that the law firm remains active and lists Rosenzweig as the CEO, Secretary and Chief Financial Officer.

Rosenzweig is also the president of a technology company that, in her words, provides “state-of-the-art, proprietary, patent-pending, hardware and software to the law enforcement community.” The business was originally called Circinus Law Enforcement, LLC but in 2018 it was renamed LEO Technologies, LLC.

The company is based in Virginia. According to records available from the Virginia Secretary of State, the business is listed as a “Foreign Limited Liability Company.”

3. Rosenzweig Worked in the Entertainment Industry for Several Years, Including Nearly a Decade With Twentieth Century Fox

Robin Rosenzweig put her law degree to use in the entertainment industry in southern California for a large portion of her professional career. According to her Linkedin profile, Rosenzweig worked for Cannon Films as Corporate counsel for nearly three years beginning in 1985.

In 1987, Rosenzweig began an eight-year run with Twentieth Century Fox. In her first year, Rosenzweig said she handled legal work for films including “Die Hard” and “War of the Roses.” In 1988, she was promoted to Vice President of Legal and Business Affairs.

Rosenzweig next became the Senior Vice President for International Video Distribution in 1992. She stayed in that role until October of 1995.

Rosenzweig appears to have taken time off from working after 1995, based on her Linkedin profile. Beginning in 2010, she got involved with film projects, such as a short film called “MAYHEM” in which she was an executive producer. From 2011 through 2013, Rosenzweig said she produced a movie called “Snake and Mongoose.”

4. Rosenzweig is Licensed to Practice Law in California & New York; She Also Has an MBA

Robin Rosenzweig appears to have spent the majority of her career in southern California. But according to Avvo, a registry of U.S. lawyers, she is also licensed to practice law in New York State.

Rosenzweig majored in theater and politics at Brandeis University, graduating in 1980. She went on to earn her law degree from the George Washington University Law School in 1983. She states on her Linkedin page that she also served as the managing editor of the Law Review while she was in law school.

In 1989, Rosenzweig balanced her job at Twentieth Century Fox with pursuing a master’s degree. She earned an MBA from the University of California- Los Angeles in 1994.

5. Robin Rosenzweig & Elliott Broidy Got Married in 1992 & Have Three Children

Robin Rosenzweig and Elliott Broidy tied the knot in 1992. She shared the above photo from the night of their rehearsal dinner in November of 1992.

The couple has three children: Nathaniel, Rachel and Lauren. Daughter Rachel got married in 2017, according to her mother’s Facebook page. Rosenzweig shared a photo in April of 2018 of her first granddaughter. 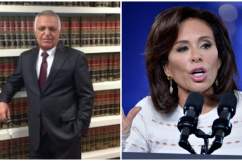