The incident happened on the Praia do Braga beach in Cabo Frio, which is a municipality in Rio de Janeiro. Vieira told local media that she and her friend were doing a photoshoot on the beach when she spotted the man exposing his penis.

Vieira decided to confront the man, named as Josenei Viana Ferreira by Brazilian news outlets. Witnesses snapped photos of Vieira punching him after she says he refused to stop.

Joyce Vieira told local newspaper Metrópoles that she and her friend were taking pictures on the beach in mid-April when they noticed a man staring at them. Vieira claimed the man, later identified as Josenei Ferreira Viana, had taken his erect penis out of his pants and was pleasuring himself. She said the man was “groaning” and did not appear to care that families and children were nearby.

Vieira, who was wearing a one-piece black bathing suit at the time, responded by punching and kicking the man. Witnesses took pictures of the violent encounter, which show the man appearing to try to back away. Vieira also called the police.

2. The Man Joyce Vieira Confronted, Josenei Ferreira Viana, Was Arrested But Insisted He Had Simply Been Urinating

Police arrested Viana and charged him for committing an “obscene act” in public. He was released from custody a short time later. Local media report that the case was being handled by the Public Prosecutor’s Office.

3. Joyce Vieira Expressed Concern About Seeing the Man Again & Told Local Media That She Had Never Hit Anyone Outside of the MMA Ring Before

Joyce Vieira told the Metrópoles newspaper that she had never used her fighting skills outside of the ring before. She expressed concern about seeing the man again in the future and added that she feels the punishment for performing sex acts in public should be more severe.

The New York Post quoted Vieira after Viana was released from police custody, “We feel powerless. It’s very strange because he’s going to be in the same city as me, and who knows he might be in the same places. That’s why I have received an innumerable number of messages from women saying that (in similar situations) they didn’t file a report, because they know the suspects would end up being released.”

Vieira has not explicitly addressed the incident on her Instagram page. But in a post from April 12, Vieira wrote a message to women in the caption. She urged women to “never limit yourself because of the limited imagination of others.”

4. Vieira is an MMA Fighter & Has the Nickname ‘Princess Fiona’

Joyce Vieira is a trained MMA fighter. According to her Instagram profile, she is also skilled in jiu-jitsu, muay thai and boxing. She demonstrated her kickboxing skills in the above video posted to Instagram on March 4.

Vieira’s fans reportedly refer to her as “Princess Fiona.” It’s a reference to the DreamWorks animated film “Shrek.” In the movie, Fiona is introduced as a beautiful princess, but she shows she doesn’t need much protection. In one classic scene, Fiona single-handedly fights off a group of men as Shrek and Donkey look on in amazement.

Vieira touched on the challenges of being an MMA fighter in a throwback post from October of 2018. She snapped a photo alongside her first trainer, Paulino Barbosa. In the caption, translated from Portuguese, she thanked him for helping her “in the most difficult moments.” She wrote that only those involved in the fight world “knows what it is to live with constant pains in the whole body” but continue to approach each day with “strength and determination” to keep moving forward.

Joyce Vieira has about 6,700 Instagram followers but appears to do a good amount of modeling for the platform. Her profile includes multiple pictures posing on the beach and she frequently tags professional photographers in the captions.

In addition to the beach photos, Vieiria has shared multiple photos of herself as a mermaid, complete with a full-sized fin. In an image shared on March 23, she wrote in the caption, “Stand on the sand and feel at home; She is the daughter of the ocean, a mermaid day, forever queen of the sea.”

Vieira also shared on her Instagram page that she has two dogs, Vitoria and Pedro. 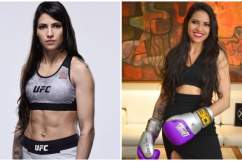