YouTube Armando 'Junior' Hernandez is identified by his mother as the alleged shooter at Westgate on May 20, 2020.

Police responded to an active shooter situation at the Westgate Entertainment District shopping center in Glendale, Arizona, at 7:25 p.m. local time on Wednesday. Shortly after arriving on the scene, the Glendale Police took the suspected shooter, identified by his mother as Armando ‘Junior’ Hernandez, into custody.

Hernandez, 20, is from Peoria, Arizona, and attended Raymond S. Kellis High School, which is located in Glendale. Hernandez’s mother was first to identify her son as the alleged suspect involved in the shooting which left three injured victims, one in critical care. Police arrested Hernandez at 2:00 a.m. local time on Thursday.

Here’s what you need to know about Armando “Junior” Hernandez:

1. A Video Purporting to Have Been Posted on Snapchat by the Shooter Was Shared On Social Media 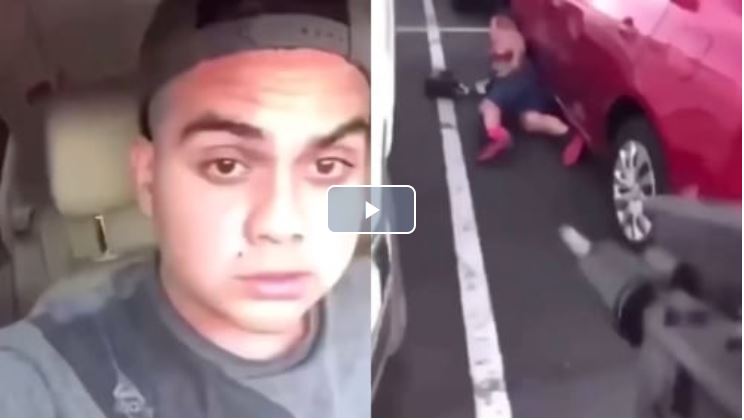 Screengrab/hoodsite.comA man who identified himself as Armando Junior Hernandez posted a video of himself before and during the shooting at the Westgate mall in Glendale, Arizona.

A disturbing video shared on social media under the Snapchat handle Arizona Man was shared on May 20 by a man who said his name was Armando Junior Hernandez. After flashing video of a long gun, he said from the seat in his vehicle, “Hello, I’m going to be the shooter of Westgate 2020. This is to get back at mean society. So let’s get this done.”

After putting on a camo face mask, the video then shows the shooter firing off rounds off shots while entering the Westage Entertainment District. Suddenly, the video cuts to a woman lying down by the front left wheel of her car, possibly injured, and the shooter said, “Society is bull****.”

The woman pleads in response, “I have nothing to do with that!” and “You already shot me, dude!”

The Maricopa prosecutor stated on Thursday that Hernandez “was not shy during the live streaming” and sent the video “to a girl he was interested in,” afterward.

The video was shared on Twitter but has been removed for violating Twitter rules, according to the site. The video can still be viewed elsewhere online. WARNING: The video may be disturbing for some viewers.

2.Hernandez Is Facing 14 Charges Following His Arrest, Including 3 Counts of Aggravated Assault With a Deadly Weapon

During the first press briefing following the shooting, Glendale Police said they arrested the suspect inside the Westgate area and brought him into custody for questioning. Video shows that the suspect was taken into custody without incident.

MORE: Maricopa Co. prosecutor says accused Westgate shooter Armando JR Hernandez shot people and asked "Do you want fries with that?" The state asked for and got a $1M
cash-only bond. He is next due in court on May 28th. #12News pic.twitter.com/2zjcEcrXZR

The Maricopa County prosecutor announced on Thursday that witnesses claimed he asked, “Do you want fries with that?” after shooting one of his victims. The state asked for a $1 million bond.

Here is the moment the shooter surrendered to Glendale PD. pic.twitter.com/2Ss0d37UnP

A witness, Juan Lopez, told 12 News reporter Joe Dana that he saw a short guy walking with a rifle in the middle of Westgate. “He let two shots off and then he was walking, and then when he hit the corner, he just started running.” Lopez added that it was hard to tell if the suspect was looking for more people to shoot while he ran away.

At least 2 injured at Westgate complex by a shooter w/ some kind of rifle. A suspect is in custody. Witness Juan Lopez describes to me what he saw. #12News pic.twitter.com/fgoeVVbCh6

Page, a 22-year-old survivor of the shooting, told 12 News that she was at Yard House for a friend’s 21st birthday when the shots rang out. She took cover while windows at the restaurant were shattered by bullet holes.

3. Hernandez, A Self-Professed Incel, Told Authorities That He Was Angry Because ‘Women Did Not Want Him’ & Aimed to Shoot Couples

Hernandez’s mother told 12 News reporter Mitch Carr, “I have no idea why he did this.”

Later on Wednesday evening, U.S. Marshals were seen searching Hernandez’s home. Carr tweeted, “Police are currently serving a search warrant on a home in Peoria. This is related to the Westgate shooting.”

LISTEN: Westgate shooter Armando JR Hernandez had his initial appearance today. Maricopa Co. prosecutor says Hernandez self-identified as an incel (involuntary celibate), that he was angry at society, & that he was planning to shoot couples. 2 of the victims were a couple #12News pic.twitter.com/wtu6CBEJzF

On Thursday, the Maricopa County prosecutor stated that Hernandez desired to shoot 10 people and that Hernandez said during his interview that he was “taking out his expressed anger at society.” Because “women don’t want him,” and therefore, is “a self-professed incel.” Hernandez openly described his “dark side” and had been contemplating a mass shooting at Westgate for three or four years.

Arizona State Senator Martin Quezada was at the Westgate Entertainment District, which is one of the Valley’s most popular destinations, at the time of the incident. The Arizona senator tweeted, “I just witnessed an armed terrorist with an AR-15 shoot up Westgate. There are multiple victims.”

I just witnessed an armed terrorist with an AR-15 shoot up Westgate. There are multiple victims.

Quezada has served in the state senate representing District 29 since 2015 and previously worked five years as a research analyst and policy advisor to the Democratic caucus in the Arizona State Senate. He said in a second tweet on Wednesday night, “I saw 2 victims with my own eyes. Not sure how many others I saw the shooter. Being told not to say anything else about details ’til I speak to police. I’m ok. Lots of shaken up people.”

In a video shared on Twitter from outside the mall area, numerous rounds of gunfire can be heard going off in the background. A Westgate Mall employee working at the time of the shooting described the situation on Twitter, saying, “I’m here at work with a coworker hiding in the back of our studio. If anyone sees anything going on in the news PLEASE let me know! Hoping to get through all of this.”

The Westgate Entertainment District was bought by GoDaddy founder Bob Parsons in 2018. Amber Liptai, a spokeswoman for Parsons’ parent company BIG YAM, released the following statement: “We are deeply troubled by this incident and our thoughts and prayers go out to the victims and their families. Westgate will continue to work closely with the Glendale Police Department and in-house security to best ensure the safety of our customers, tenants, and residents.”