Getty An inflatable rat wearing a protective mask is seen outside a construction site where union workers are protesting on May 11, 2020, in Manhattan in New York.

The Center for Disease Control issued a new warning about rodent control during the COVID-19 outbreak. The CDC warns that rats are more likely to invade homes and act aggressively because commercial trash supplies have dried up and typical food sources are scarce. In the U.K., the British Pest Control Association reported that more than half of pest control professionals have seen an increase in activity since the lockdown began, according to I News. In March, a video of a group of rats roaming a New Orleans street went viral, and pest control remains “essential” in a number of cities.

In an interview with NBC News, Bobby Corrigan, an urban rodentologist, explains that rodents living in more residential areas are doing well because, “not a single thing has changed with them, because someone’s doing their trash exactly the same in their yard as they’ve always done it — poorly.” For rats in commercial areas, however, the hunt for new turf means all-out war.

In the Fight for a New Food Source, Rats Resort to Cannibalism 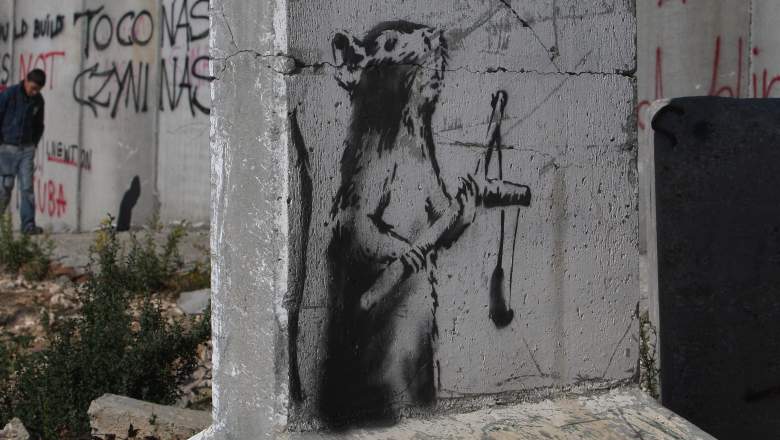 Getty A new stencil painting on a concrete barricade by elusive British graffiti artist Banksy shows a rat holding a slingshot on December 5, 2007.

According to the Illinois Department of Public Health (IDPH), “[e]ach rat colony has its own territory, which can span an entire city block and harbor more than 100 rats.” A rat’s territory will typically span a 50- to 150-foot radius from the nest, but that radius may be smaller if all of a rat’s needs are met in a smaller space. Now that commercial areas are throwing out a lot less trash, rats are forced to venture farther and seek new territory with a reliable food source.

“It’s just like we’ve seen in the history of mankind, where people try to take over lands and they come in with militaries and armies and fight to the death, literally, for who’s going to conquer that land. And that’s what happens with rats,” Corrigan said. “A new ‘army’ of rats come in, and whichever army has the strongest rats is going to conquer that area.”

Corrigan adds, “[t]hey’re mammals just like you and I, and so when you’re really, really hungry, you’re not going to act the same — you’re going to act very bad, usually.” He continues, “[s]o these rats are fighting with one another, now the adults are killing the young in the nest and cannibalizing the pups.”

The CDC Has Urged People To Take Preventative Action 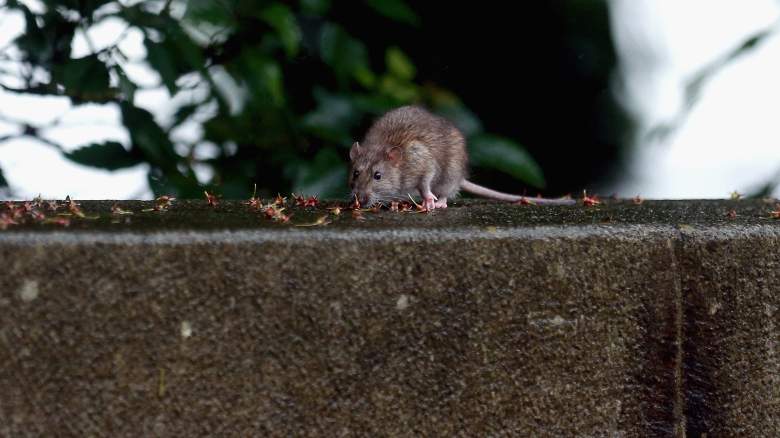 Getty A rat is saving itself on a wall, fleeing the rising river Inn on June 3, 2013, in Passau, Germany.

Rats and mice spread over 35 diseases worldwide, according to the CDC. Disease from rats can spread to humans directly if humans come into contact with rodents or rodent feces, saliva, or urine. Rodents can also carry disease into the home via ticks, mites, and fleas. To protect against an aggressive and hungry rodent population, the CDC recommends “sealing up access into homes and businesses, removing debris and heavy vegetation, keeping garbage in tightly covered bins, and removing pet and bird food from [your yard].”

IDPH warns that rats can fit into holes as small as 1/4 inch. In order to seal access into your home, IDPH recommends using wire mesh to block holes this size and larger. IDPH recommends a number of other measures to prevent rats from entering the home, including keeping doors closed, draining sinks and other standing water, and frequently removing trash. Cities also employ a number of tactics to manage rat populations, including rat bait stations and feral cats.

“This is not going to be a case where all of a sudden the rats are doing invasions everywhere, and it’s not going to be exactly as we saw on Bourbon Street in New Orleans,” warns Corrigan. Rather, Corrigan anticipates that the rat problem will be a block-by-block issue, according to NBC News. The real emphasis is on food.

“Rats are designed to smell molecules of anything that’s food-related,” Corrigan said. “They follow those food molecules like heat-seeking missiles — and eventually you know they end up where those molecules are originating.”

READ NEXT: Billions of Cicadas To Swarm in Parts of the South This Summer

Loading more stories
wpDiscuz
0
0
Would love your thoughts, please comment.x
()
x
| Reply
The CDC has issued a warning about "aggressive" and "unusual" rodent behavior during the COVID-19 outbreak.