Ethan Jacob Dickerson is the Illinois teenager accused of trying to beat his neighbor to death with a pipe wrench. Police said Dickerson, 19, had threatened to kill the victim because the victim is gay.

The victim was hospitalized but the injuries were not life-threatening, according to the AP.

1. Dickerson Told the Victim He Was ‘Evil’ for Being Gay, Police Said

The attack happened on February 17 in Decatur, a city located in central Illinois. According to an affidavit obtained by local NBC affiliate WAND-TV, the victim told police that the attacker revealed his motive during the crime.

The victim, whom WAND-TV identified as a 60-year-old homeowner, told police that he managed to yell “why” at his attacker. He said the suspect, later identified by police as Dickerson, responded, “You know why I have to do this. You’re gay. You’re evil. I’m going to kill you.”

A few days after the attack, Decatur residents held a rally to show their support for members of the LGBTQ+ community. Coordinator August Francis told FOX Illinois, “Just wanting to make sure that the survivor knows that he’s supported and has support. And anybody who has been a victim of hate crimes has that support.”

2. Dickerson Broke Into the Victim’s House Through a Front Window, Police Said, in Daylight

An officer responded to the victim’s house on Delray Court shortly after 5:30 p.m., WAND-TV reported. The police had received a call about someone breaking through a window.

This would’ve happened in broad daylight, based on sunset times in central Illinois. The Herald & Review also reported that it was specifically the front window of the home that was shattered.

A google search of Delray Court shows it’s a suburban street filled with other homes. Police have not publicly speculated about whether Dickerson had been concerned about being spotted by witnesses.

3. Police Said Dickerson Duct-Taped the Victim to a Chair & Hit Him Repeatedly With a Pipe Wrench

The victim told police he had been lying in bed before hearing the glass shatter in his front window, according to the affidavit cited by WAND-TV and the Herald & Review.

The victim said Dickerson had a pipe wrench and used it to hit him multiple times on the head and all over his body. He said Dickerson duct-taped him to a chair, tied his wrists together, and put duct tape over his mouth.

He said Dickerson briefly stopped and stepped outside. The victim said he was able to get free from the chair, but that when Dickerson came back inside, the two wrestled for control of the pipe wrench. He claimed Dickerson tried to choke him with the wrench before the police officer arrived.

4. Dickerson Surrendered Immediately & Police Said He Was Covered in Blood

The responding officer kicked open the door after hearing cries for help, according to the affidavit. The officer said Dickerson, who was covered in blood, surrendered immediately.

The victim was taken to the hospital after losing a “significant” amount of blood, the AP reported. The victim required stitches but was expected to be ok.

5. Dickerson Was Charged With a Hate Crime & Other Charges Including Attempted Murder 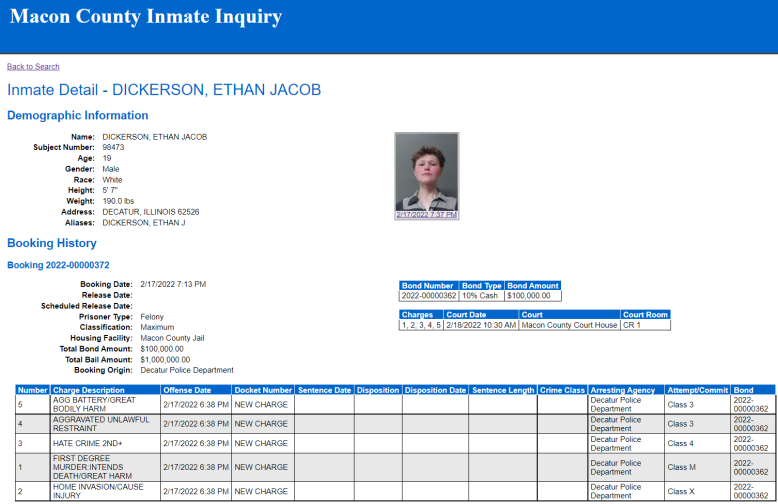 Macon County JailEthan Dickerson is accused of trying to beat his neighbor to death for being gay, police said.

Dickerson was arrested and booked into the Macon County Jail. Bail was set at $1 million. Based on records on the Macon County Sheriff’s Department, it was not immediately clear whether Dickerson had an attorney who could speak on his behalf.

He faces several charges including:

The Illinois Commission on Discrimination and Hate Crimes defines hate crimes as “crimes committed on the basis of the victim’s perceived or actual race, color, creed, religion, ancestry, gender, sexual orientation, physical or mental disability, or national origin of an individual or group of individuals.”

The AP reports the state’s attorney’s office is reviewing the charges.

Since Dickerson is only 19, there is little information available about him publicly as records pertaining to minors are generally sealed to the public.

His name only comes up in a search of Macon County court records for a traffic violation. He was cited in August 2021 for failing to obey a stop sign.

The court record shows he pleaded guilty, paid a fine, and had to complete a driver’s education course. Another citation for operating an uninsured vehicle appears to have been dismissed.

Loading more stories
wpDiscuz
0
0
Would love your thoughts, please comment.x
()
x
| Reply
Ethan Dickerson of Decatur, Illinois, is charged with attempted murder & a hate crime after police said he tried to beat his neighbor to death for being gay.