The slain Bristol Police Department officers have been identified as Sergeant Dustin Demonte, 35, and Officer Alex Hamzy, 34. Officer Alec Iurato, 26, was injured and has been released from the hospital after surgery, police said in a press release. Demonte died at the hospital, and Hamzy was pronounced dead at the scene, according to police.

The state police said in its press release, “Bristol Police received a 911 call reporting a possible domestic violence incident between two siblings at 310 Redstone Hill Road” about 10:20 p.m. on Wednesday, October 12. Bristol is a city of about 60,000 people located in central Connecticut, near Hartford. The shooting scene is by ESPN’s headquarters.

“Preliminary information appears to point to the 911 call being a deliberate act to lure law enforcement to the scene,” the state police said. The suspect’s brother, 32-year-old Nathan Brutcher, was wounded in the shooting. His role in the incident is unknown. The shooting remains under investigation by state police detectives, officials said.

Here’s what you need to know about Nicholas “Nick” Brutcher:

1. Nicholas Brutcher Fired More Than 80 Times During the Incident After ‘Attacking the Officers From Behind,’ Authorities Say

Connecticut State Police said in its press release, “Upon arrival, Bristol Police Officers were immediately encountered by a suspect outside of 310 Redstone Hill Road. Shots were fired and one officer, Officer Alex Hamzy, died at the scene, while two other officers were also shot. Sergeant Dustin Demonte was taken to Bristol Hospital, where he was pronounced deceased. Officer Alec Iurato was transported to St. Francis Hospital in Hartford, where he is undergoing surgery for serious wounds.”

In an October 15 press release, the Connecticut Officer of Inspector General, which is investigating the shooting, said officers went to the house after a 911 call believed to have been made by Nicholas Brutcher. Demonte, Hamzy and Iurato arrived at the scene together, the release said. They first went to a side door of the home and spoke to Brutcher’s brother, Nathan, and asked him to show his hands and step out of the house, which he did, the press release said.

“As Nathan Brutcher stepped out, gunfire erupted. Nicholas Brutcher fired well over eighty rounds attacking the officers from behind, fatally shooting both Sergeant DeMonte and Officer Hamzy, and wounding Officer Iurato,” the inspector general’s office said. The information comes from a preliminary report on the shooting. The office also released a portion of body camera video from Iurato’s camera.

According to the release, “Despite sustaining a gunshot wound to his leg, Officer Iurato was able to make his way around the house and back to a Bristol Police Department cruiser. From that vantage point, he fired one shot striking and killing Nicholas Brutcher. Although some details of the investigation remain to be determined, it is evident from the evidence collected so far that Officer Iurato’s use of deadly force was justified.”

The New York Times wrote, “Norberto Rodriguez, who lives across the street from where the shooting occurred, said that on Wednesday night he saw a man dressed in camouflage emerge from the house with a gun. Another man ran out, apparently to restrain him, and the man with the rifle shot the second man, Mr. Rodriguez said.” 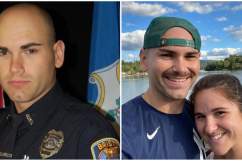 2. Brutcher & His Brother Had Been Involved in a Disturbance at a Nearby Bar Before the Shooting & He Had Been Issued a Citation, According to Reports

Nick Brutcher had been kicked out of a bar in Bristol before the shooting, NBC Connecticut reported. He then returned home, where he got into a fight with his brother, police sources told the news station. He was armed with an AR-15-style rifle, according to NBC Connecticut.

According to ABC News, police sources said Bristol Police had responded to reports of a disorderly patron at a bar and issued a summons to that man in the hours before the shooting.

The Hartford Courant reported that a neighbor, Anthony Rodriguez, said he saw Nicholas Brutcher fighting with his brother outside their home while dressed in “army fatigues and holding a large rifle with a high-capacity magazine attached to it.” Rodriguez told the newspaper he heard Brutcher telling his brother he was going to “shoot up” a local bar. Rodriguez said Brutcher’s brother stopped him from doing that and Nicholas Brutcher shot him.

Rodriguez told the Courant he then saw officers arrive and saw Nicholas Brutcher open fire as soon as they got to the house, “He ambushed them; they didn’t even have a chance,” he told the newspaper. 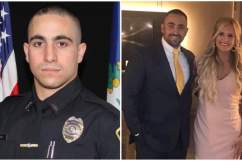 Alex Hamzy: A Tribute to the Bristol, Connecticut Officer

3. Nick Brutcher, Who Grew Up in Bristol & Graduated From Bristol Central High School, Was Divorced & Had Children

According to his Facebook page, Nick Brutcher grew up in Bristol and graduated from Bristol Central High School. He graduated in 2015, according to records. Brutcher’s Facebook page shows that he has children and was previously married. He was Facebook friends with one of the slain officers, Alex Hamzy, his page shows.

Brutcher has several photos posted on Facebook with his kids, along with photos showing him hunting and fishing and with a rifle. One photo from his wedding shows him in the center of a line of men and boys holding guns. Brutcher and his wife divorced in 2019, Connecticut court records show. On Facebook, Brutcher said he had been in a relationship since January 2022.

In April 2021, Brutcher posted a video on Facebook with his daughters joking about “canceling” McDonald’s because they asked if he wanted a boy toy or a girl toy in a Happy Meal. The video now has hundreds of comments attacking Brutcher after the shooting.

Brutcher’s Facebook page also shows photos of him with a rifle. Little other information about Brutcher was immediately available, and his family hasn’t commented. His brother, Nate Brutcher, also attended Bristol Central High School, according to his Facebook page.

4. Brutcher Does Not Appear to Have a Criminal Record Other Than Traffic Offenses & Was Sued Over Credit Card Debt in 2021; Police Seized 14 Guns From His Home, a News Station Reports

Public records show that Nick Brutcher did not appear to have a criminal record in Connecticut other than traffic offenses. It was not immediately known if he had ever been arrested in another state.

According to WTNH News 8, police seized 14 guns from Brutcher’s home along with the AR-15-style rifle used in the shooting. Authorities have not commented on the report and whether the guns were obtained legally.

Bristol Police Chief Brian Gould said at a press conference about the slain and wounded officers, “They answered a call for duty and responded without hesitation. That’s what they did every night before that, and that’s what we’ll continue to do day after day. Our community has been rocked. Our police department has been rocked.”

A witness, Ken Przygocki, told WFSB, “I probably heard 12 to 15 bangs, looked around about a minute later, [then heard] another rapid fire and then one single shot.” Another witness, Ted Krawiec, told the news station, “We just, like, [heard] the gunshots like ‘pop pop pop pop pop pop’ up and stop, and then stop for maybe 30 seconds and then another round ‘pop pop pop pop pop’ and then it just stopped. And then [we] started hearing sirens and everything else.”

5. State Police Said It Would Conduct a ‘Very Complex’ Investigation

Bristol Mayor Jeff Caggiano wrote on Facebook, “Bristol has been rocked to our core. Today is a day to honor our fallen officers and their families. We have had tremendous outpouring of concern and sympathy and we know the entire community is hurting. … Additionally, a ‘Bristol Police Heroes Fund’ has been established through the Bristol Police Union at Thomaston Savings Bank to support the families. Donations are currently being accepted at all branches and additional donation opportunities will be forthcoming.”

Connecticut Governor Ned Lamont said in a statement, “The loss of two officers from the Bristol Police Department who were killed in the line of duty while responding to an emergency call of domestic violence is a senseless tragedy, and my prayers are with their families, loved ones and fellow officers. I also ask the residents of Connecticut to keep in their prayers a third officer who was shot while responding to this emergency.”

Lamont added, “This is a devastating reminder of the dangers that police officers face every day to protect our families and neighbors from all kinds of situations. These officers are heroes and will always be remembered for the honorable service they provided to their town and their state. This continues to be an active situation, and I’ve directed DESPP Commissioner James Rovella and the Connecticut State Police to support the Bristol Police Department and greater community in every way they can.”

According to the Courant, Lamont told reporters in Southington on Thursday, “There are too many guns out there, too many illegal guns. Sometimes when there’s alcohol and guns, that’s a pretty bad combination. What we can do, I think, is strengthen our police force, strengthen community policing, get more cops on the beat, and make sure that people know justice is right around the corner.” 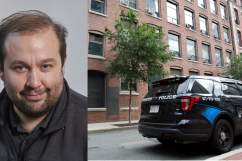