Orsolya Gaal was found dead in a duffel bag in Queens, New York, after a chilling video showed a person dragging her body down the street near her home. She was stabbed 60 times, police sources told the New York Post. The 51-year-old married mother of two was killed on Saturday, April 16, 2022, according to police. David Bonola was arrested on April 21, 2022.

Gaal was seen working in her yard and then went out for the night in the hours before she was murdered, the New York Post reported. Gaal’s body was found about a half-mile away from her home, the NYPD said.

Police sources told PIX11, “She apparently told her youngest son she was going out to watch a show, but met up with another man instead. At some point, the man killed Gaal in the basement of her home, put her in a duffel bag and dumped her body, police sources said.” Video obtained by police showed the suspected killer dragging the bag down the street in the Forest Park neighborhood of Queens, the news station reported.

According to NBC News, “Officials received a call about a suspicious bag with blood on it at the corner of Metropolitan Avenue and Jackie Robinson Parkway in Forest Hills shortly after 8 a.m. Saturday, the New York City Police Department said.” Gaal was pronounced dead at the scene.

An autopsy by the New York City Office of Chief Medical Examiner ruled her death a homicide caused by “sharp force injuries of the neck,” NBC News reported. Gaal was stabbed on the neck, torso and left arm, sources told the New York Post. Puncture wounds were found on her trachea and carotid artery, the newspaper reports. She also had “knife wounds inside her fingers and on the palms of her hands,” according to the Post.

Here’s what you need to know about Orsolya Gaal and her murder:

1. Orsolya Gaal’s Husband & Eldest Son Were Out of Town on the Night She Was Killed; Her Youngest Son Was Home & Was Questioned by Police, According to Reports

Gaal’s husband, Howard Klein, and their 17-year-old son were out of town at the time she was killed, according to multiple reports. According to the New York Post, the 13-year-old boy was seen being led out of the home in handcuffs by police and he was questioned by investigators. The boy, his brother and his father are not considered to be persons of interest, CBS News reports. Gaal was found dead about 8 a.m. on Saturday, the NYPD says.

CBS News reported, “Sources told CBS New York the suspected cause of death was blunt force trauma. They said investigators initially believed Gaal’s 13-year-old son and husband may have been persons of interest in the case. They later said the husband is not considered a suspect. Police said Gaal’s 13-year-old son was taken in for questioning and was released. Investigators are now looking at the victim’s phone records to determine when it was last active.” The 13-year-old is also no longer considered to be a person of interest, CBS News reported on Monday.

Klein was in Portland, Oregon, visiting a college with his son, according to a now-deleted tweet on his Twitter page. Klein had tweeted that they were in Oregon and had been planning to visit the University of Michigan in Ann Arbor next. He told the New York Post he and his son were planning to fly home to New York on Sunday. He said they were “in the middle of a terrible experience,” the newspaper reported. Klein could not be reached for comment by Heavy and it was not immediately clear if he has hired an attorney or spokesperson to represent the family. 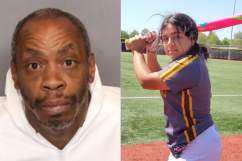 2. Gaal’s Husband Says Her Apparent Killer Texted Him From Her Phone, ‘Your Whole Family Is Next’

FacebookOrsolya Gaal with her husband, Howard Klein, and their two sons.

Gaal’s husband told PIX11 he received a text from his wife’s phone saying, “Your whole family is next,” the news station reports. Klein told the New York Post his youngest son is “safe,” adding, “Thank God my son is safe.”

Klein said his family’s “lives are at stake,” the newspaper reported. “There are concerns about our safety. Our lives are at risk,” Klein told the Post. Police have not confirmed Klein’s statements about the threatening text message or whether Gaal’s husband and sons’ lives are in danger.

According to PIX11, the text message to Klein from his wife’s phone also warned him not to call police. The suspected killer texted Klein saying that Gaal had put him in jail several years ago, the news station reports. Anyone with information about the homicide is asked to call police at Crime Stoppers at 1 (800) 577-TIPS (8477), the NYPD says. Tips can also be made by visiting crimestoppers.nypdonline.org, through the NYPD Crime Stoppers mobile app, or by texting 274637 (CRIMES) and then entering TIP577.

Gaal Is Originally From Hungary & Studied at the Budapest Business School, According to Her Facebook Page

FacebookOrsolya Gaal in a photo from her Facebook page.

Gaal is originally from Hungary, where some of her family, including her mother and sister, still live, and she studied at the Budapest Business School College of International Management and Business, according to her Facebook profile. It was not immediately clear when Gaal moved to the United States and how long she had been married to her husband.

According to CBS News, neighbors said Gaal was a “stay-at-home mom who loved her children.” Nicola Blankson told the news station, “Just so tragic. I just feel sick to the bone about hearing this. She enjoyed life. She was out and about, you know, socializing, seeing theaters, traveling. … She was in the garden with the dog and the son, so I heard them talking, just regular family stuff.”

Gaal’s husband, Howard Klein, is the co-founder of RK Equity, according to his LinkedIn profile. The LinkedIn says, “Howard founded New York-based boutique capital markets advisory firm RK Equity in 2002 and has over 25 years experience raising capital for and investing across multiple investment themes in natural resources, with a particular focus on lithium and other commodities relevant to batteries used in electric vehicles and utility storage.

Her husband’s LinkedIn adds, “Howard authors and distributes the “Lithium-ion Bull” newsletter and co-hosts ‘Rock Stock Channel’ on YouTube and ‘Lithium-ion Rocks!’ podcast, which has a wide audience of institutional investors and accredited investors in North America, Australia and Europe. Howard also speaks regularly at investment conferences about the disruptive battery metals thematic.” The University of Michigan and Columbia Business School graduate and New York native has experience working in central Europe, including in his wife’s home country of Hungary, according to his LinkedIn page.

4. Police Followed a Trail of Blood From Where Gaal’s Body Was Found Back to Her House & Then Watched Surveillance Footage Showing Her Body Being Dragged Down the Street in a Duffel Bag

According to police, investigators followed a trail of blood from where the duffel bag and Gaal’s body were found Saturday morning, PIX11 reports. The blood led them to Gaal’s home on Juno Street. Detectives then found surveillance video from nearby homes showing a person dragging the large duffel bag down the street, according to PIX11.

NBC New York reported, “Law enforcement sources said a trail of blood led detectives to a nearby home on Juno Street. Investigators spent much of the day scouring the crime scene where the body was found, the residence, and the trail of evidence linking the two.”

The New York Daily News reports the duffel bag that was used to move Gaal’s body is believed to have come from inside her house. The bag has also been described as a hockey bag and witnesses said it had wheels.

Glenn Van Nostrand, who found Gaal’s body while walking his dogs, told the New York Post he looked inside and saw a foot and then a hip. He told the newspaper, “But to me it looked a mannequin. It didn’t look very fleshy. It was more like a crash test dummy. I thought it was maybe some equipment being used for something. I didn’t think anything of it.” He told the Post he then saw black ankle-length jeans, a belt and a woman’s waist and blood. He realized it was a woman’s body in the fetal position, the newspaper reports. He said he thought, “‘Oh, my goodness,'” and called police.

5. Gaal Was Reported Missing in 2020 by Her Husband, Police Say

According to the New York Daily News, police had only previously been called to Gaal’s Queens home in May 2020 when her husband reported her missing. The newspaper reported that he called police back after a few hours to say she had returned home. No other details about that incident have been made public.

Gaal’s neighbor, John Blankson, told PIX11 the neighborhood is quiet. “Nothing happens here,” Blankson told the news station. Another neighbor, who was not identified, told PIX11, “We’re very sad, and we can’t believe … something like this could happen on [our] block.”

Blankson told NBC News, “What a tragedy, just for everybody involved. You can’t write this off. I think everyone’s trying to figure out what happened. How did this happen? Why did this happen?” Another neighbor, Theodora Grafas, told the Daily News Gaal was, “Just an amazing person and she’s going to be missed by all of us that knew her. She was really just wonderful…Her kindness to people. She was super friendly. And the way she took care of her kids and her husband. We would do our nails together. Friday morning, when I passed by she waved to me and I waved to her. I was going to do some errands and that was the last time I saw her.”

Loading more stories
wpDiscuz
0
0
Would love your thoughts, please comment.x
()
x
| Reply
Orsolya Gaal was found dead in a duffel bag in Queens, New York, after a chilling video showed her body being dragged down the street near her home. She was stabbed several times, police say.