Facebook/Steve Denton Stephon Jamar Duncan is a Delta flight attendant who was detained by fellow passengers while on a plane while off-duty.

Stephon Jamar Duncan is a Delta Airlines flight attendant who had to be detained mid-air by crew members and fellow passengers while he was traveling off-duty on a flight from Los Angeles to Atlanta, authorities said. The plane was diverted to Oklahoma City and Duncan was arrested, ABC News reports. The 34-year-old Duncan remains detained after the Friday, June 11, 2021, incident.

Oklahoma City Police spokesman Jermaine Johnson told ABC News that Duncan threatened to “take down the plane.” According to police, Duncan made “terroristic threats.” Police told ABC News Duncan was exhibiting signs of mental illness and was taken to the hospital after complaining of chest pain.

Delta Airlines issued a statement saying, “Thanks to the crew and passengers of Delta Flight 1730 (LAX to ATL) who assisted in detaining an unruly passenger as the flight diverted to Oklahoma City (OKC). The aircraft landed without incident and the passenger was removed by law enforcement. We apologize to our customers for the delay and any additional inconvenience this caused.” Delta said the flight continued on to Atlanta after police searched the plane. 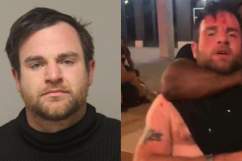 Here’s what you need to know about Stephon Duncan:

The Flight Crew Asked for All ‘Strong Men’ on the Plane to Help Detain Duncan, a Passenger Says

Someone tried hijacking our plane from LAX to ATL pic.twitter.com/fkPDPR60hu

A passenger on the flight, Ali Burns, tweeted, “Someone tried hijacking our plane from LAX to ATL. … The man made an announcement that we needed to be close to our oxygen masks & proceeded to try & open the door. They then called all the ‘strong men’ to the front of the plane to restrain him. We ended up landing in OKC as it was the closest airport to us.” Burns later added, “Update: he was trying to open the door to the outside, not the cockpit.” A video posted by Burns shows a struggle at the front of the plane.

According to Wired, it is impossible for a person to open a plane door mid-air. Michele Meo a professor of materials at the University of Bath, told Wired, “You cannot open because the aircraft is pressurized, and the cabin pressure is higher than the outside air pressure. The difference can be as much as 55158.1 Newtons per square meter (or 5500 kg applied to one square meter). Basically, the door is sealed against the aircraft frame.”

Another video posted by a passenger, Steve Denton, shows flight crew and passengers struggling with Duncan and holding him down.

Darren Genet, one of the passengers who assisted, told ABC News there was a “fracas” and he and other passengers “swooped in” to help restrain Duncan. “We’re holding him down and he was screaming and crying,” Genet told the news network. “And then one of the gentlemen on the flight was a Marine, and he came over and they got the restraints, and we kind of all held him down until we got the restraints on. By then he was sort of apologizing.” An off-duty pilot also assisted, according to ABC News.

Genet added, “It was pretty scary. We were just really fortunate that we were able to get this guy down.”

Denton told WSB-TV, “The passenger that caused the issue he was challenged the entire time. He boarded the flight. He was wearing a helmet. Really weird behavior. He walked to the front and grabbed the PA system knew exactly what to do and made this announcement ‘hey, everybody put on your oxygen mask because there’s getting ready to be a lot of turbulence on this flight.”

The mid-air disruption involving Duncan is the latest of a string of mid-air incidents that have occurred since air travel has increased amid the easing of COVID-19 restrictions and fears. A week before the Duncan incident, a flight from LAX to Detroit was diverted because of a passenger making threats, authorities said. And earlier that same week, a flight attendant and passengers had to hold down and zip-tie a man who tried to storm the cockpit’s doors. In late May, a Southwest flight attendant was attacked by a passenger and was left bloodied with two teeth knocked out.

Duncan began working at Delta Airlines as a flight attendant in 2015, according to his Facebook page. He has also worked for Peachtree Orthopedics, his Facebook says. He wrote in the “about” section of his Facebook profile, “I love to meet new people , and im opened minded individual.”

On March 23, Duncan posted an announcement, saying, “I want to announce to the world that days of my creativity being on the back burner is over. From the tallest mountain in the world I AM A RAPPER! And I love it! Look out for my music. The name is Ooeygooey. Let’s uplift black lives!!!!! Follow me on IG: Ooeygooey87”

A post shared by Stephon (CEO and founder) (@ooeygooey87)

He wrote in his Instagram profile, “How ooey gooey butter cake has inspired me to create a movement that will hopefully inspire others, make people laugh and put a smile on faces!”

Local law enforcement are doing a sweep of the plane to check for any further security issues. pic.twitter.com/wdgfcmQwAC

Duncan remains in custody at the Oklahoma County Jail, but Oklahoma court records do not show any charges filed against him. According to ABC News, Duncan was expected to be charged with two counts of assault and battery on the state level. But the FBI is investigating and federal charges could also be filed against Duncan.

Duncan could not be reached for comment by Heavy and it was not immediately clear if he has hired an attorney who could speak on his behalf. Delta has not commented about Duncan’s employment status.

Another passenger, Brannon Nazarian, told NBC Los Angeles an announcement on the plane said, “This is the captain speaking. We’d like all strong males to come to the front of the aircraft to handle a problem passenger.” Nazarian told the news station, “The next thing I knew, there were people rushing up the to the front, and he started shoving people, and there was this outrageous fight. He was fighting them back extremely hard. His feet were flying in the air. The flight attendant was — it looked like he had a concussion.”

“I was hoping to sleep on that flight and that didn’t happen,” Curlee told CNN. “It feels very surreal … It’s a once in a lifetime event. It’s something you really always kind of in the back of your head, like, wonder if this will happen. Well today it actually did. I am very thankful that it did not end badly.”

Read More
Atlanta, Breaking News, Los Angeles
wpDiscuz
0
0
Would love your thoughts, please comment.x
()
x
| Reply
Stephon Jamar Duncan is a Delta Airlines flight attendant who was detained by passengers and crew while he was off-duty and a passenger on a plane when he became "unruly."