Getty How many people were at Trump's Michigan rally?

Former President Donald Trump hosted a “Save America” rally on Saturday, April 2, in Washington Township, Michigan. It’s part of a series of “Save America” rallies that he’s hosting. Here’s a look at how many people attended Trump’s rally, including crowd photos, overflow details, and updates about what happened.

The Venue Reached Its Capacity of 5,500, With More People Outside in Overflow Areas

The rally took place at the Michigan Star Sports Center in Washington Township, Michigan. Although doors opened in the afternoon, Trump’s speech was scheduled to begin around 7 p.m. Eastern.

According to Dave Boucher, a journalist for Detroit Free Press, there were at least 4,000 to 5,000 people inside the venue for Trump’s rally, with more people outside. Click on Detroit described the crowd as a “crush at the doors” as the venue opened.

Beth LeBlanc of The Detroit News reported that Fire Chief Brian Tyrell told her the indoor capacity for Trump’s rally was being capped at 5,500, and they anticipated reaching that cap. He said there would still be a few thousand people outside watching on overflow screens. This would put attendance at a little over 8,000 possibly. (The Detroit News officially reported on its website that Trump was speaking to 5,500 people.)

He anticipates that will leave a few thousand people still in line outside for the program, where there are screens set up for viewing. pic.twitter.com/H2tDUQLuIH

Tyrell told trustees that he was concerned about the crowd size at the limited-capacity venue, Bridge Michigan reported. The venue isn’t authorized to host entertainment events due to its lower capacity, and is typically only used for sports practices.

Tyrell said before Saturday’s event, “We’re starting to see a pattern here of allowing this building for this use that was never approved. At some point, we just can’t allow this to happen because (we) don’t allow it to happen (any other day of the year).”

Boucher shared this video of when Trump showed up for the rally, which showed quite a few people lined up outside.

Venue now at capacity, police temporarily move the remaining crowd outside away from the building ahead of former President Trump’s arrival pic.twitter.com/2Kn0nkGmUL

He also shared this video showing the crowd outside before they began being allowed into the venue.

Crowd is now being let inside the Trump rally, with thousands outside the Michigan Stars Sports Center this afternoon pic.twitter.com/S0ofsQuQKV

There were definitely thousands outside who could not make it inside the venue. Dave Bondy of Mid-Michigan NOW reported that thousands of people were still waiting in line. He posted the video after Trump was scheduled to begin speaking.

Thousands of people still waiting to get inside to see former President Trump tonight. We will have it live on Facebook at 7 and at https://t.co/eSrteey7ZZ pic.twitter.com/9QkPIMVK53

Boucher said that about six hours before Trump was scheduled to speak, there were already thousands of people in line.

About 6 hours until ex-President Trump speaks in Macomb County and thousands of people already in line. Kid Rock on the speakers, lots of people asking for signatures for ballot petitions and candidates pic.twitter.com/ZFKKJVjX4Z

Clara Hendrickson of Detroit Free Press shared that on each of the seats inside the venue, there were blank forms for signatures for the Secure MI Vote initiative, which is seeking stricter over ID laws and a prohibition on ballot applications being mailed if not requested first by the voter.

Detroit Free Press reported that the last time Trump hosted a rally in Michigan, just before the 2020 election, he said that if he didn’t win “I’ll be so angry, I’ll never come back.” Trump lost to President Joe Biden by about 154,000 votes in Michigan. 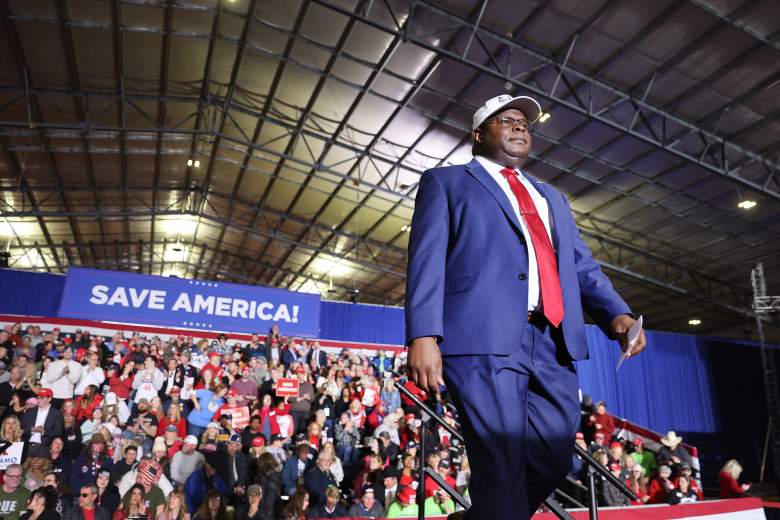 GettyJohn Gibbs, a candidate for congress, is seen at the Michigan 2022 rally for Trump.

Detroit Free Press shared that Trump is supporting a number of Michigan candidates, including Matthew DePerno (running to be the Republicans’ nominee for state attorney general) and Kristina Karamo (running for the Republican’s nomination for secretary of state.)

During his speech, Trump encouraged attendees to vote out Gretchen Whitmer and referred to this as “the most dangerous period of our lifetime.”

Trump Has Another Rally Scheduled

Trump has one more rally scheduled next week, according to his website. A rally in Selma, North Carolina, is taking place on April 9 at 7 p.m. Eastern at The Farm at 95.

Trump has not yet announced if he is running in the 2024 presidential election. However, he did tell the crowd during his speech in South Carolina that “we may have to run again,” and added “we will take back the White House.” Trump made the same comments during his Georgia rally, saying that he might have to run again.

Loading more stories
wpDiscuz
0
0
Would love your thoughts, please comment.x
()
x
| Reply
Former President Donald Trump held a rally in Washington Township, Michigan, on April 2. See photos of many attended, along with updates about what happened.