Twitter A man was smacked in the head with a can of Twisted Tea after he used the n-word at a Circle K in Elyria, Ohio, a viral video shows.

A video of a white man being smacked in the head with a can of Twisted Tea after he said “n****” at an Elyria, Ohio, Circle K convenience store has gone viral on social media. The video was first posted on Christmas Eve and has been viewed millions of times on Twitter and other social media sites.

The video shows the man, who is not wearing a mask, waiting in line to buy beer at the Cleveland-area Circle K while talking and using the racial slur. A Black man standing behind him in the line, holding a can of Twisted Tea hard iced tea that he planned to purchase, confronts him. After the white man tells the Black man, “smack me with it,” the Black man does just that, hitting him across the face and knocking him to the ground. After the man gets back up, the video shows him charging at the man who hit him, but the man tackles him down to the ground and punches him several times.

According to social media users, the incident occurred at the Circle K on Broad Street. The video quickly went viral after it was shared on Twitter by Rex Chapman, Snoop Dogg and others, and it has spawned many memes and jokes. 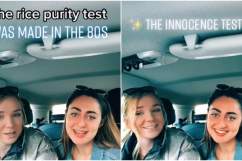 The Innocence Test: Friends Create the Rice Purity Test for the 21st Century

The White Man Can Be Heard in the Video Saying, ‘I’m Gonna Say N**** All Day,’ but He Says He’s Not Trying to Be Disrespectful

The video begins with the white man cursing and saying “n****” multiple times while waiting to buy beer at the Elyria convenience store. He then says where he lives, two blocks away from the store, and says to the Black man waiting in line behind him with a Twisted Tea can, “I’m not trying to disrespect you bro, I’m not. I’m gonna say ‘n****’ all day, everyday. Are you kidding me? Where you from n****? Where you from? Where you from?”

The Black man stares him down and responds, “Here n****.” The white man responds, “From here? Get the f*** outta here. You a clown n****. On God, you a clown.” The Black man then picks up his can of Twisted Tea and holds it below his waist, as the other man says, “What are you going to smack me with it?” and then puts down his beer, bends over and slaps his own face saying, “Smack me.”

The man drops his can of Twisted Tea while trying to flip and catch it in his hand, and the other man then tries to kick it away. The Black man then swings the can and smashes it right into his face, sending him down to the ground and into a trash can. He then gets up and charges at the man who just hit him, but gets thrown back down to the ground and punched in the head multiple times. As he is being punched, the other man says, “call me a f***** n*****.” He then pulls him up to his feet and walks away, leaving the white man shaking his hands out and saying, “you good” repeatedly. 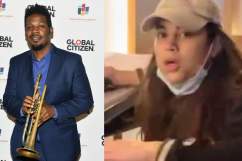 The men seen in the video have not been identified and have not spoken out about what happened. Few details about when the incident occurred have been revealed. Heavy reached out to the man who posted the video on Twitter on December 24, where it has more than 1 million views, but did not immediately hear back. He tweeted, “This is NOT my video lmao I’m just simply sharing it to spread the joy of seeing a racist get his s*** cooked. Just stop saying n**** if you’re not black LMFAO it’s literally not hard at all.”

Lmaooooo yeah bro I know forsure who it is pic.twitter.com/AQMQLX3sV7

Elyria Police Lieutenant James Welsh told the Elyria Chronicle-Telegram he has seen the video and thinks he knows who the men are, but said no one in the video has been charged and there have been no reports from anyone involved made to police.

Welsh told the local newspaper on December 25, “It has obviously gone viral on the internet, but to my knowledge it was never called in or reported.”

Loading more stories
wpDiscuz
0
0
Would love your thoughts, please comment.x
()
x
| Reply
A video of a man being smashed in the head with a Twisted Tea can after he used the n-word during an incident at a Circle K convenience store in Elyria, Ohio, has gone viral.