First-person shooters are still as relevant as they’ve ever been.

2018 was jam-packed with some of the best releases in the genre, such as Call of Duty: Black Ops 4, Battlefield V, and Far Cry 5. These titles and many more like them featured your usual gamut of tightly woven single-player campaigns, fast-paced competitive multiplayer matches, and Battle Royale mode experimentation. 2019’s lineup of first-person shooters looks to be even more exciting than the year that came before it. Sequels to beloved franchises and even new IP’s within the healthy genre are on the way.

Here’s a list of all the noteworthy first-person shooters set to hit consoles in 2019.

The development studio behind the Titanfall series pulled off a pretty huge move in 2019. On the same day that they unveiled their newest game, it was already available to download and play. Instead of releasing another entry in their mech-based FPS, Respawn opted to head into the battle royale genre with Apex Legends.

This fun take on the popular sub-genre places players within teams of three as they scrounge up guns, armor, grenades, health packs, and more. The smooth gunplay and swift maneuvering that the Titanfall games are known for successfully making the transition to this new IP. There’s plenty of charm on display here thanks to the game’s varied heroes and their awesome array of finishing moves. Apex Legends looks like it’ll grow into a serious battle royale contender as the year rolls on.

Spoilers for anyone who still hasn’t played Far Cry 5! So a nuclear warhead went off at the end of that game and laid waste to everything in its vicinity. Seventeen years after that traumatic event transpired, the last group of remaining survivors attempts to rebuild their lives in Hope County.

However, a group of bandits by the name of the Highwaymen stand in the way of the survivors’ progress. As one of those survivors, you’ll experience everything that makes Far Cry…well, Far Cry. The post-apocalyptic world you’ll inhabit in New Dawn needs some cleaning up. You, your vast arsenal, and fellow “Guns/Fangs for Hire,” will see to it that the Highwaymen’s twin sisters Mickey and Lou go down. 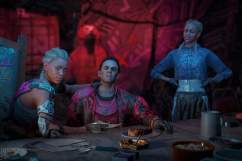 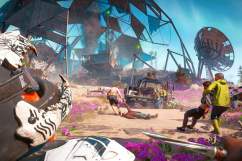 If Far Cry: New Dawn isn’t your cup of tea, there’s another FPS to busy yourself with on the same day that aforementioned game releases. Metro Exodus continues the sci-fi tale that was beautifully told in Metro 2033 and Metro: Last Light. Once again, you don the tactical gear of Artyom and venture outside of the familiar setting of the Metro in Moscow. You’ll be accompanied by a new faction, board a train that doubles as your home base, and attempts to brave the dangers of a “nuclear winter.” Metro Exodus will challenge your wits and test your will to survive in a harsh world full of mutant dangers. 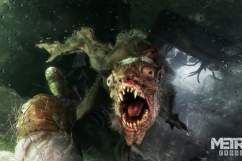 When id Software introduced the gaming public to the first RAGE, it received decent reviews from critics and fans alike. But plenty of gamers lamented the game’s drab environments, lack of a truly open world, and disappointing ending. No one was really asking for a sequel to that last-gen FPS.

But now that everyone has laid eyes on it, the hype has now reached a fever pitch. RAGE 2 is going big in so many ways. The post-apocalyptic wasteland is full of vibrant characters, upgraded vehicular combat, and some new offensive/defensive abilities to test out on your foes. Stepping into the ranger boots of Walker will transport you into RAGE 2’s outlandish, explosive wasteland. 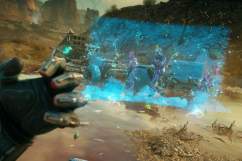 Splitgate: Arena Warfare is a clever mashup of FPS mechanics that work together oh so well. Its fast-paced gameplay evokes the overall feel of the Halo series, while its portal hopping mechanics are reminiscent of Valve’s puzzle-laden FPS. Speaking of Halo, the development team behind this new FPS know a thing or two about it since its members worked on producing Halo 3. The bright stages, slick maneuvering, and masterfully tuned shooting do enough to turn this brand new FPS IP into a viable e-sports commodity. And the old-school feel of the game as a whole should entice those who’re looking for something a bit simpler that harkens back to 90’s arena shooters.

As a prisoner with nothing to lose, you’re given the dangerous task of scrounging up rare goods in derelict spaceships. You’ll have an endless supply of sacrificial prisoners to choose from from a group known as the “Void Bastards,” who’re based out of the Sargasso Nebula. This cel-shaded FPS wants you to carefully map out your moves and play it smart as you utilize all sorts of weapons crafted on the go. There’s a bunch of spaceships worth raiding and vicious void whales, hermits, and pirates to exterminate. Void Bastards is not your everyday FPS, which makes it worth paying extra special attention to.

Buy an Xbox Gift Card here so you can digitally purchase Void Bastards.

Before B.J. Blazkowicz can bring a conclusive end to his anti-Nazi crusade, his twin daughters have to find him first. This interesting premise provides the backbone for the next entry in the reborn Wolfenstein franchise. Wolfenstein: Youngblood, which takes place 19 years after The New Colossus, places you (and hopefully a willing co-op buddy) in the 1980s. As Jess or Soph, you and a fellow online freedom fighter will blast through Nazi forces as you look to liberate the people they still oppress. There’s going to be a lot of heart-wrenching moments and plenty of gory deaths on hand in this new Wolfenstein spinoff. 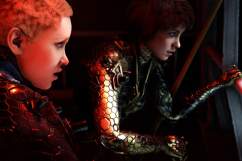 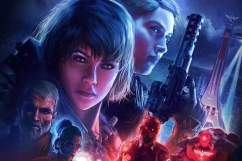 3D Realms’ slogan is “Firepower Matters.” That statement falls in line with their penchant for releasing some of the best first-person shooters of all time. If you ran around corridors blasting baddies in Duke Nukem 3D and Shadow Warrior, then you’ve spent some time with two classic 3D Realms games. The publisher’s next release has been improving during its Early Access phase since 2018. And now in 2019, that throwback first-person shooter is getting a new lease on life with an official launch and a new name – Ion Fury. It’s time to wreak havoc and gun down a new group of enemies within the confines of the classic “Build Engine.” Ion Fury is an awesome ode to 3D Realms’ iconic shooters.

Buy a PSN Gift Card here so you can digitally purchase Ion Fury.

Buy an Xbox Gift Card here so you can digitally purchase Ion Fury.

Crytek’s bounty hunting first-person shooter is finally making its way out of Steam Early Access and Xbox Game Preview in 2019. Hunt: Showdown first became playable to the public in February 2018. Since then, the game has gone through a number of changes that have refined and retooled it for the better. The name of the game is as follows – ten players (playing solo or in teams of two) navigate a murky Louisiana swamp while out hunting creatures. While fulfilling these monster bounties, players have to be wary of other hunters. What transpires during every match of Hunt: Showdown is an intense game of cat, mouse, and otherworldly beast. Crytek might have a hit on its hands.

Buy a PSN Gift Card here so you can digitally purchase Hunt: Showdown.

Buy an Xbox Gift Card here so you can digitally purchase Hunt: Showdown.

This sequel’s been a long time coming. Borderlands fans had a feeling that their favorite FPS/RPG hybrid was hitting current-gen consoles via a new entry. Thankfully, Randy Pitchford’s social media teases resulted in that feeling being well warranted. It turns out Gearbox Software spent years in secrecy putting together Borderlands 3, a mega-sequel that delivers more loot and more zany foes to shoot at. Players can hook up with three other fellow Vault Hunters as they run around Pandora and eventually hop into their spaceship for some interplanetary travel. Borderlands 3’s new 4-person squad (Amara, Moze, Zane, and FL4K) are ready to rid their world of Troy and Tyreen Calypso. As an incoming player, you’ll certainly have fun helping them meet their goal. 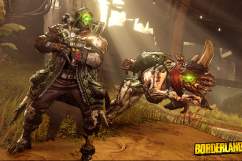 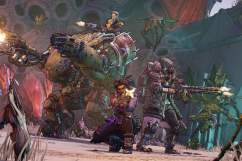 If you’ve spent plenty of time within PlanetSide Arena’s Closed Beta phase, then you already know what you’re getting into with the final release. As for everyone else, prepare yourself for one of the biggest (if not THE biggest) FPS’ of the year. This sci-fi themed multiplayer shooter throws you into a literal war – the Massive Clash mode lets you wreak havoc whilst in the middle of a 250 vs. 250 live player group battle.

The Battle Royale craze is present within PlanetSide Arena as well thanks to the presence of the insanely fun solo and duos modes. Upcoming seasons of the game will add in legacy FPS multiplayer modes, which will hopefully keep PlanetSide Arena’s player base satisfied, healthy, and growing.

Things finally seem to feel a bit different about this year’s latest Call of Duty entry. One of the main differences between this installment and 2018’s Black Ops 4 is this game’s reliance on a brand new development engine. With a new engine comes an even cleaner presentation in the visuals department. This reboot of the Modern Warfare sub-series looks to be a welcome revival that may breathe some much-needed life into the COD franchise. The reintroduction of a single-player campaign, the always fun online multiplayer, and additional co-op modes are definitely where the fun’s going to be. And thankfully, you’ll get to experience all those features in a modern war setting all over again. 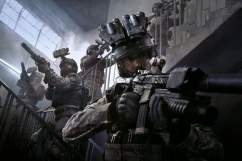 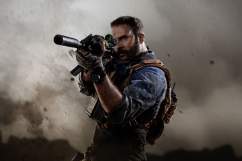 3D Realms are the old-school masterminds behind some of your favorite first-person shooters, such as Duke Nukem 3D and the recently released Ion Fury. Their latest project evokes memories of Quake, which should instantly whet the appetites of fans who played that PC FPS to death back in the day. WRATH: Aeon of Ruin puts you behind the view of the “Outlander.” As you wade through a dark and cursed realm, you blast demons to pieces and attempt to eliminate the remaining “Guardians of the Old World.” The fast-paced gunplay and retro visuals give this FPS a retro feel in the best ways possible. Put your firearms and wrist blade to good use during your bloody extended stay in WRATH: Aeon of Ruin.

Pick up a Steam gift card here if you’re looking to start playing WRATH: Aeon of Ruin on PC.

Skynet’s path of destruction and terror is in full effect. And in order to combat them and bring humanity back to a place of power, you’ll need to join the human resistance. Terminator: Resistance puts you smack dab in the middle of that future war as Jacob Rivers, an ally of John Conner who’s out to save the world from Skynet. 2028 Los Angeles is filled with robots to take down and other types of technological menaces that need to be eliminated. This FPS gives you all the firearms and ammo you need to shoot down all sorts of baddies that fight on behalf of Skynet. And along the way, you’ll make a ton of important decisions that play out dramatically and impact the game’s ending. Terminator fans certainly have something to enjoy here.

And here’s a few first-person shooters that were released years prior, but are now making their way to certain consoles for the first time in 2019: