The next Fortnite Crew bundle is almost here and if you’ve been paying any attention to the additional loading screens being handed out over the weeks, then the reveal shouldn’t be a big surprise.

Epic revealed the main attraction of the month and it’s the Mecha Cuddle Master skin. Following along with the free loading screens showed the creation of this character, so it’s cool to see it all come together like this.

Like any Fortnite Crew bundle, the skin isn’t the only thing you’ll be getting, even if it the thing players subscribe for most.

Here’s a look at everything that’s included in the bundle and when you’ll be able to get your hands on it.

Mecha Cuddle Master returns to the Island and joins the Fortnite Crew on June 1!https://t.co/rYjF0L5TF4 pic.twitter.com/hk46CRckrP

The Mecha Cuddle Master was officially introduced through a very cool anime-style trailer.

After a journey through dimensions, this character is finally set to enter your locker on May 31 at 8 p.m.

Here’s a look at everything that’s included in this bundle:

If you’re a fan of different styles, Epic has you covered there as well. There will be the regular pink style, a black Midnight style and the white and red Royale style.

This timing is good because if you don’t have the Season 6 Battle Pass yet for some reason, the Crew subscription will unlock that and it will also get you the Season 7 one as the new season begins next month too.

What Happens to Deimos? 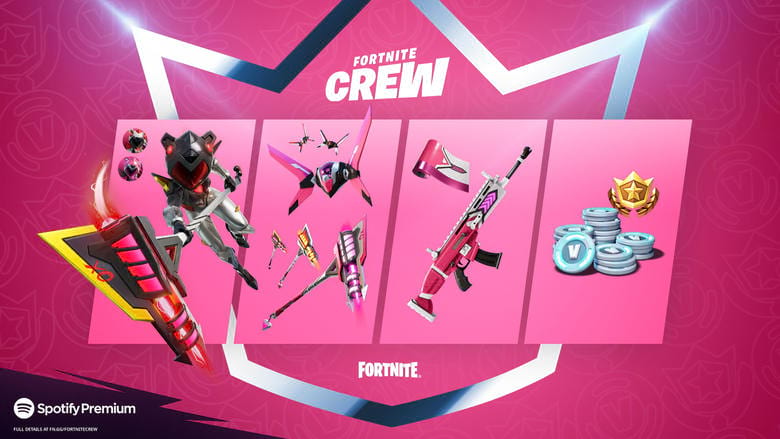 The only downside to the Crew subscriptions is once the new month rolls around, that means everything in the last bundle is lost for good.

This means that when May comes to a close, Deimos will no longer be unlockable through any other means. One of the big draws of the Crew subscription is the fact that everything in them is exclusive.

If you’re a person who likes to collect all of the rare skins you can, then you likely already subscribe to the service. A year down the line and you’ll have a bunch of exclusive skins you can show to your friends who weren’t subscribers.

There were definitely some duds so far, but for the most part, the service has been pretty solid. Now, you’re able to get three months of Spotify Premium, so it’s a slick deal.

Will you be picking up the new bundle when it releases?