Last night the Boston Marathon bombers — identified as brothers Tamerlan and Dzhokhar Tsarnaev — continued their terror-filled rampage. During the wee hours of the night, as shots and explosions continued to reverberate through the otherwise quiet city, local news reported that police had one of the suspects “in custody.”

This suspect was older brother Tamerlan Tsarnaev, and he was not alive.

TMZ has confirmed that a gruesome photo circulating through the internet depicts the violently mutilated body of Tamerlan Tsarnaev, who was reportedly run over by his escaping brother after he was shot.

The picture shows the bullet-ridden lifeless corpse of 26-year-old Tamerlan. 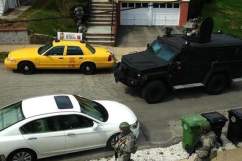