Susan Rice hasn’t had the cleanest track-record in Washington — but now the highly controversial U.S Ambassador to the United Nations will become Obama’s National Security Advisor. Rice’s contentious handeling of the Benghazi attack made her into Republicans’ scapegoat and prevented her from becoming Obama’s second-term secretary of state.

Although her tainted reputation in the Senate thwarted her from attaining the position now filled by John Kerry, Rice will now be replacing Tom Donilon as National Security Advisor.

Rice — known for her humanitarian interventionist viewpoint — will be responsible for creating a unified agenda on foreign policy for the president of the United States. With lofty foreign policy issues such as the presence of al-Qaeda in Afganistan and Pakistan as well as the ongoing humanitarian crisis in Syria, Rice will have to step up to the plate.

Here are the top 10 facts you need to know about Susan Rice and the circumstances of her appointment.

So much for the charm offensive. Obama is making a bold statement by appointing Rice — a known foe of Republicans. Rice’s appointment will clearly be opposed by House Republicans and her appointment would have most likely not gone through if Senate approval was necessary. Rice has hailed her longtime role as Obama’s “trusted advisor” and the appointment might be seen as a reward for Rice’s early loyalty to the president. Rice took a chance on Obama during his 2008 White House run when it was still unclear whether he or Hillary Clinton would be the Democratic nominee.

2. Rice was Criticized for Her Remarks After Benghazi

Rice was cast into the limelight with the Benghazi controversy. The Benghazi attack on the U.S Consulate, which killed four Americans including U.S Ambassador Christoper Stevens — was said to have been triggered by protests over an anti-Islam film. Gregory Hicks, the former top U.S diplomat in Libya at the time, testified and rebuked the Obama administration allegations and said that the attack on the consolute was a terrorist attack.

Rice “did no bother to have a conversation” with Hicks before she made five television appearances the day after the attack in Benghazi. Rice claimed a YouTube video was the impetus of the attack. Again, Rice never talked to Hicks before making those statements. 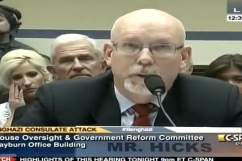 Obviously I disagree w/ POTUS appointment of Susan Rice as Nat’l Security Adviser, but I’ll make every effort to work w/ her on imp’t issues

“Obviously I disagree [with Obama’s] appointment of Susan Rice as Nat’l Security Adviser, but I’ll make every effort to work [with] her on [important] issues,” Sen. John McCain, one of Rice’s foremost critics on Benghazi, wrote on Twitter. Republican New Hampshire Sen. Kelly Ayotte took a similar tack on Twitter:

Amb Rice did a disservice to the nation when she made misleading stmts abt #Benghazi.However, its POTUS’ call & I’ll work with her going fwd

“Republicans see this as a slap in the face because of the Benghazi fiasco and how Rice tried to propagate talking points that seemed to be viewed more for protecting the president’s campaign than really getting down to what happened,” said Ron Bonjean, a GOP strategist, to Yahoo news. “Republicans will question her credibility when it comes to national security issues—that her judgment is off and it could add to controversies in the future if there are questionable national security moves made by the White House.”

4. She Yanked Her Name as a Replacement for Hillary Clinton as Secretary of State

In December 13, following ongoing controversy related to the 2012 Benghazi attack on the U.S consulate, Rice announced that she was withdrawing her name from consideration as secretary of state, saying that if nominated “the confirmation process would be lengthy, disruptive, and costly.” John Kerry was nominated instead.

Rice served in the Clinton administration in various capacities: at the National Security Council from 1993 to 1997; as director for international organizations and peacekeeping from 1993 to 1995 and as special assistant to the president and senior director for African affairs from 1995 to 1997. At the time of the 1994 Rwandan Genocide, Rice reportedly said, “If we use the word ‘genocide’ and are seen as doing nothing, what will be the effect on the November election?” Rice subsequently acknowledged the mistakes made at the time and felt that a debt needed repaying.The inability or failure of the Clinton administration to do anything about the genocide would inform her later views on possible military interventions.

6. She Supported Western Inverention in Libya

The United States and the international community saw only one choice for Gaddafi and his aides: Step down from power or face significant consequences. Rice offered some of the toughest rhetoric toward Gaddafi, blasting his denials of atrocities against his own citizens as “frankly, delusional.” Several UN diplomats said that in a closed door meeting on April 28, Rice’s claims of Gaddafi’s atrocities included the issuance of Viagra to loyalists in order to further terrorize the population with sexual violence.

Rice’s strong support of Western intervention in Libya could inform the president’s decision on U.S role in Syria’s current war.

7. U.N Diplomats Have Called Her “Rude” and “Overly Blunt”

Some Security Council diplomats took issue with Rice’s negotiating style, calling it “rude” and “overly blunt.” According to David Rothkopf of Foreign Policy magazine, Rice is known for her “abrasiveness” but has the asset of a close relationship with the U.S. president. Human rights activists took issue with Rice and U.S. foreign policy generally in 2012 for working against U.N. statements that criticized Rwanda for supporting a rebel group in Congo known for committing atrocities.

First, she will have to dial back the bravado and contentiousness that have marked her tenure at the United Nations. Her sharp elbows and quick wit often turned into sharp rebukes that left some of her diplomatic counterparts bruised. That may work when muscling policies through the U.N. Security Council, but the National Security Council is a different business. Her counterparts there, at State, Defense, the military and the intelligence community, have substantial egos and individual, not to mention institutional, agendas.

8. The Controversial Samantha Power Will Replace Rice in the U.N

Samantha Power — the former special assistant to the president and senior director for Multilateral Affairs and Human Rights at the National Security Council — will take Susan Rice’s position as U.S ambassador for the U.N. Powers is not without controversy either. She stepped down from the Obama campaign in 2008 after referring to HIllary Clinton, then Obama’s opponent in the Democratic primary, as a “monster.”

Her bio is posted on the White House’s website:

Samantha Power is Former Special Assistant to the President and Senior Director for Multilateral Affairs and Human Rights at the National Security Council. Power most recently served as the Anna Lindh Professor of the Practice of Global Leadership and Public Policy at Harvard’s John F. Kennedy School of Government, where she taught courses on U.S. foreign policy, human rights, and extremism and where she was the founding Executive Director of the Carr Center for Human Rights Policy.

She is the Pulitzer Prize-winning author of A Problem from Hell: America and the Age of Genocide (2002) and Chasing the Flame: Sergio Viera de Mello and the Fight to Save the World (2008), the basis for the award-winning HBO documentary, “Sergio.” She is also the recent editor, with Derek Chollet, of The Unquiet American: Richard Holbrooke in the World (2011). Power has served as a columnist at Time Magazine and, in her journalism, has reported from such places as Bosnia, East Timor, Kosovo, Rwanda, Sudan, and Zimbabwe, and contributed regularly to the New Yorker Magazine, the New York Review of Books, and the New Republic.

9.She Comes From an Elite Family

Susan Rice was born in Washington, D.C., on November 17, 1964, to parents Lois Dickson Fitt and Emmett J. Rice. Rice’s family is well renowned among the Washington elite; father, Emmett, is a Cornell University economics professor and former governor of the Federal Reserve System, while mother Lois is an education policy researcher and guest scholar at the Brookings Institution.

Growing up, Rice’s family often spoke of politics and foreign policy at the dinner table. Her mother’s job also brought notable figures through the house, including Madeline Albright, with whom Rice’s mother served with on a local school board. Albright would later become a pivotal figure in Rice’s personal and professional life.

The devastating war in Syria has already seen an approximate of 100,000 causalities

The United States is caught in a Syria stalemate. As a severe humanitarian crisis continued to wreak havoc in the war-torn country, the world is looking to the U.S to see if intervention may be a solution. As pressure builds on the president to rethink support for ailing rebel groups in Syria, his decision to pick Rice, will be examined for whether it signals a shift in the administration’s foreign policy. Rice (as well as Samantha Powers) is known for her humanitarian interventionist viewpoint.