It has long be assumed that Christopher McCandless, existentialist roustabout who provided the source material for Jon Krakauer’s Into the Wild and the subsequent film starring Emile Hirsch, starved to death while in the Alaskan backcountry.

But nobody understood how starvation could happen to a 24-year-old, fit young man.

According to Outside, an earlier hypothesis was that he ingested toxic alkaloids while eating wild-potato seeds. But chemical tests of the potato seeds at the University of Alaska proved that there were no such alkaloids.

Now in a blog post for The New Yorker, Jon Krakauker claims the mystery is finally solved. He writes:

It’s been estimated that, in the twentieth century, more than a hundred thousand people worldwide were permanently paralyzed from eating grass pea. The injurious substance in the plant turned out to be a neurotoxin, beta-N-oxalyl-L-alpha-beta diaminoproprionic acid, a compound commonly referred to as beta-ODAP or, more often, just ODAP.

Last month, Krakauker sent a sample of McCandless’ potato seeds to be tested. The results confirmed his suspicions — the seeds contained “.394 per cent beta-ODAP by weight, a concentration well within the levels known to cause lathyrism in humans.”

Lathyrism is the technical term for the type of paralysis incurred by ingesting ODAP infected vegetation.

Krakauker concludes the findings with:

[The] discovery that McCandless perished because he ate toxic seeds is unlikely to persuade many Alaskans to regard McCandless in a more sympathetic light, but it may prevent other backcountry foragers from accidentally poisoning themselves. Had McCandless’s guidebook to edible plants warned that Hedysarum alpinum seeds contain a neurotoxin that can cause paralysis, he probably would have walked out of the wild in late August with no more difficulty than when he walked into the wild in April, and would still be alive today. If that were the case, Chris McCandless would now be forty-five years old. 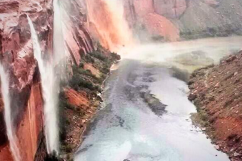 Read More
Breaking News
wpDiscuz
0
0
Would love your thoughts, please comment.x
()
x
| Reply
Jon Krakauer, author of 'Into the Wild', has come forward with new findings in the cause of death of Christopher McCandless.