At the request of multiple news agencies, the search warrant application tied to Philip Chism’s murder investigation has been released.

• Chism brought to school that day a box cutter, gloves, a mask and changes of clothing.

• A female student entered the bathroom where Chism allegedly attacked Ritzer and quickly walked out after witnessing an “exposed butt.”

• The teacher’s lifeless body was found in the woods, naked from the waist down, with her throat slit. Her body was staged in a sexual position and she had been molested with a tree branch.

• With the body was a note that said “I hate you all.”

• When cops caught up with Chism, in his bag they found a bloody boxcutter, credit cards, two driver’s licenses, and a pair of women’s underwear.

• Asked about the blood on the boxcutter, Chism said it came from “the girl.”

• Chism’s parents were going through a divorce, and he was angered when Ritzer talked to him about Tennessee, where he lived before coming to Massachusetts.

Here, via Boston Herald reporter @johnzaremba, are all nine pages of the affidavit (WARNING:DISTURBING CONTENT): 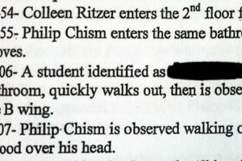 Beloved high school teacher Colleen Ritzer, 24, was raped and murdered by her student Philip Chism according to court documents that remained sealed, reports My Fox Boston.

Chism stood before a grand jury in Essex County, Massachusetts on November 21.

Investigators have said that Chism robbed Ritzer of her iPhone, credit cards and underwear. They also claim he sexually assaulted her with an “object.” District Attorney Jonathan Blodgett told The Eagle-Tribune:

The indictments returned today detail horrific and unspeakable acts. This is the first step in a long process to secure justice for Ms. Ritzer and her family. 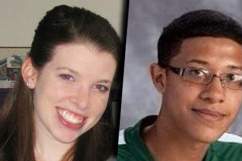