Molly Schuyler is the woman who won Wing Bowl 22 in Philadelphia on Friday, ESPN reported.

She defeated an all-male group of eaters, including last year’s champion Jamie “The Bear” McDonald. The only other woman to ever win the contest is Sonya “The Black Widow” Thomas, who took first place in 2004.

Here’s what we know about Mrs. Schuyler:

Here’s a clip of Schuyler and other competitors during and after the event:

Philadelphia Eagles center Jason Kelce, probably the most well-known participant in this year’s event, was ousted from the competition after the opening round. His 65 wings eaten weren’t enough to advance to the second of three rounds.

There were 30 total participants in Wing Bowl 22, which began at 8 a.m. at the Wells Fargo Center in South Philly.

Watch footage from the competition below:

USA: Wing Bowl winner eats competition's hopes, dreamsNebraska native Molly Schuyler set an all-time record in the competitive eating world on her way to claiming the annual Wing Bowl trophy in Philadelphia on Friday. The 120lb (54kg) mother of four finished her final round by tearing through a total of 363 chicken wings in 30 minutes, ahead of second placed Patrick Bertoletti,…2014-01-31T19:45:23.000Z

There was also a brawl or two at Wing Bowl 22, which you can check out below:

2. She Qualified By Eating a Lot of Cottage Cheese

Yes, to qualify for this year’s Wing Bowl, Schuyler had to eat nine pounds of cottage cheese in 114 seconds.

She credits drinking a lot of liquids — including having soda and water chugging contests as a child — as the primary reason for her competitive eating prowess today.

I drink a lot of water. Since I drink so much liquid, I have a really big stomach.”

I used to drink a two-liter bottle of soda in 17 seconds or less.”

Stomach elasticity is generally considered the most important factor in competitive eating. Drinking large amounts of water stretches out the belly, which has an amazing capacity to hold absurdly excessive quantities of food.

Check out the clip below to see Schuyler wolf down an exorbitant amount of curd:

Schuyler lives in Omaha, Nebraksa, with her four children. She works as a server and bartender at Applebee’s while her husband Sean serves in the Air Force, according to Omaha.com.

Along with a gold medal and championship ring, a first place finish at Wing Bowl 22 earned Schuyler the grand prize of $22,000.

When asked what she would do with the money, she told Philly.com:

I have car payments and kids, so it’s all good.”

Schuyler is certainly no stranger to competitive eating.

She made headlines in early January for eating a 72-ounce steak in less than three minutes, setting a new world record.

Schuyler accomplished this feat at Sayler’s Old Country Kitchen in Portland, Oregon. The restaurant boasts the 72-ounce steak challenge, which requires the contestant eat the gigantic steak, two celery sticks, two carrot sticks, two pickles, a salad, 10 french fries, a baked potato and a slice of bread — all in an hour and without leaving the table.

According to the NY Daily News, the restaurant claims only eight out of 39 women have successfully completed the challenge.

Watch Schuyler devour the steak below:

Molly Schuyler Vs. Sayler's 72 oz Steak Record – New World RecordFor licensing/usage please contact: licensing@jukinmedia.com I had the chance to visit Sayler's in Portland, OR and try their amazing steak challenge. World record for eating just a 72 oz steak is 6 min 48 seconds. I took it down just a little bit faster :)2014-01-07T13:40:45.000Z

In August 2012, Schuyler became the first woman to triumph over the ‘Stellenator’ — the brainchild of some imaginative cooks at Stella’s Bar and Grill in her hometown of Bellevue, Nebraska.

Schuyler gobbled up the cholesterol-filled, saturated fat-packed, meaty mega serving of greasy goodness in 15 minutes, which, according to Omaha.com, is the second fastest time ever.

According to Omaha.com, she was the first person to attempt the challenge, which she completed in 24 minutes, 56 seconds. 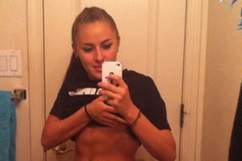