The FBI and Nevada Gaming Control agents have taken down an illegal sports betting ring which was operated out of several high-end suites in the strip’s Caesars Palace hotel.

According to the FBI, Wei Seng Phua, a Malaysian millionaire, was the head of the operation. Phua, who goes by Paul, is worth upwards of $400 million and is a high-ranking member of the 14K Triad, an international crime syndicate responsible for global drug trafficking, illegal gambling and prostitution, among other illegal pursuits.

Agents carried out a raid last Wednesday and several arrested were made Sunday afternoon. The arrests coincide with the 2014 World Cup championship match.

1. Eight People From Malaysia, China and Hong Kong Were Arrested

Eight people, Wei Seng Phua included, were arrested in connection to the betting ring, according to KLAS-TV. Officials arrested seven men and one woman, all of whom were charged with one count of illegal transmission of wagering information and one count of operating an illegal gambling business, according to the Las Vegas Review-Journal. Those are both felony charges.

2. Phua Made a Name for Himself in the Poker Circuit

Phua, who goes by Paul in the poker world, has earned $2.3 million in winnings from three different poker tournaments, according to PokerStars.com.
He travels around the world, playing in some of the highest buy-in tournaments and cash games, regularly playing the biggest games in Macau, PokerStars.com reports. Phua finished sixth in this year’s PokerStars and Monte-Carlo® Casino European Poker Tour Grand Final €100,000 Super High Roller tournament and played in the EPT10 Grand Final.

3. The 14K Triad Was Founded as an Anti-Communist Group

The 14K Triad was formed by Lieutenant-General Kot Siu-wong in Guangzhou, China in 1945. The group relocated to Hong Kong in 1949 following the Chinese Civil War. The 14K is one of China’s most violent and most loosely connected Hong Kong-based triad societies. The 14K was one of the largest Triad groups in the world during the 1990s, but after a crackdown in Macau in 1999, the group has resurfaced in North American cities including Los Angeles, Chicago and Vancouver.

According to the Las Vegas Review-Journal, Caesars Palace technicians called authorities after the three suites involved in the ring requested an, “unusually large amount of electronics equipment and technical support.” The hotel cooperated with authorities and isn’t being targeted in the investigation. The ring was allegedly taking bets on the World Cup championship match. Phua and 20 other people were arrested in Macau on June 18 for taking in hundreds of millions of dollars of illegal World Cup bets, the Review-Journal reports. It’s believed Phua and his associates resumed the Macau betting ring in Las Vegas. It’s not clear how much money was involved in the betting ring.

5. Phua Is Still in Las Vegas

According to the Review-Journal, Wei Seng Phua and his son, Darren Wai Kit Phua, posted a combined $2.5 million bail, using Wei Seng Phua’s $48 million jet as collateral. They were put under house arrest complete with electronic monitoring at the home of a Las Vegas physician who befriended the elder Phua through poker. Prominent members of the poker community, including well-known player Andrew Robl, were pooling assets to help pay Wei Seng Phua’s bail, according to the Review-Journal. 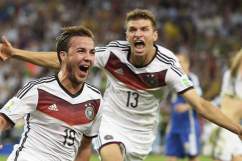