Lyle “Ty” Hoffman is the only suspect in Monday’s murder of Minnesota businessman Kelly Phillips. Here’s what you need to know.

1. He’s Wanted for the Murder of his Ex-Boyfriend & Business Partner

On Monday morning, Hoffman was in his BMW with Kelly Phillips for unknown reasons. The pair had been separated for quite some time, both romantically and professionally.

At around 8 AM, Hoffman pulled off into a gas station in Arden Hills, Minnesota.

…the two men got out of the car and the driver shot the other man three times — the last shot being in the head from close range as Phillips pleaded for his life.

Hoffman allegedly shot Phillips in the head point blank to kill him, then ran him over as he made his getaway.

2. Hoffman is Wanted by Police for Questioning

Hoffman has been on the run since Monday and has since ditched his car.

According to Fox 9 News, the SWAT team has since become involved:

Tuesday afternoon, a SWAT team searched two hangars at Anoka County-Blaine Airport in connection with Monday’s murder, but the hangars were cleared with no sign of Ty Hoffman.

Hoffman’s sister, Dawn Gominsky, thinks that her brother may have committed suicide after the murder.

In an interview with Star Tribune she told reporters:

…on Wednesday, the sister of Lyle “Ty” Hoffman, the man the Ramsey County Sheriff’s Office calls a suspect in the case, said she fears that her brother may have taken his life.

“Possibly,” Dawn Gominsky said. “I’m assuming if he did this, probably.”

During their time together, they worked together on various business ventures in the Twin Cities.

Hoffman and Phillips opened a gay bar in Minneapolis five years ago called the Lush Food Bar. A Lavender magazine article about the opening described the two as “life partners” as well as partners in the bar.

On behalf of the management and staff of Lush Food Bar, it is with our deepest sympathies that we have to share the tragic death of Lush Food Bar co-founder Kelly Philips. We would like to extend our sympathies to Kelly’s family; his fiancé Nathon and to his many friends.

And a few months ago, Phillips had Hoffman evicted from a home he owned.

Some friends claim that Hoffman had become physically violent towards Phillips.

Hoffman’s sister, Dawn Gominsky, says that Phillips was a “sneaky lawyer” who continually screwed her brother over financially after their break-up. 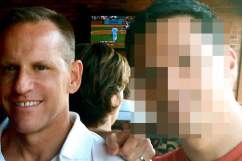 Loading more stories
wpDiscuz
0
0
Would love your thoughts, please comment.x
()
x
| Reply
Ty Hoffman is the only suspect wanted by police for the murder of Kelly Phillips, a prominent Minneapolis businessman. The ex-boyfriends owned Lush, a gay bar.