Ricky Shawatza Hall has been named as the man who was shot dead after driving into a restricted area at NSA’s Fort Meade headquarters. Hall’s partner, Kevin Fleming, was also shot during the bizarre incident which took place on the morning of March 30. Like Fleming, Hall lived in Baltimore.

1. He Was Driving a Stolen SUV

The car that tried to ram the gates at Fort Meade. (Screengrab via WUSA)

NBC Washington reports that two suspects who were disguised as women tried to gain entry to the NSA building before being stopped by guards at the front. The station also says that guns and drugs were found in the suspect’s car. The car belonged to a 60-year-old man who is being questioned by the FBI. The three partied at the Terrace Motel in Elkridge, Maryland. The FBI says that Hall and Fleming stole the man’s Ford SUV while he was out of the room.

2. Ricky Hall Was Went by the Alias Maya

WUSA’s Scott Bloom tweeted that Hall went by the alias Maya. He added that he was homeless, citing sources in Baltimore’s transvestite community.

One of the roadblocks set up around the perimeter of NSA. #WJZ @cbsbaltimore pic.twitter.com/sd4YeD3kQX

At the time of his death, Hall was living along North Charles Street in an Baltimore abandoned building, reports The Sun. Hall was the driver of the car. The Daily Beast’s Shane Harris tweeted that Hall was on probation for 2013 robbery conviction.

3. The FBI Said the Incident Is Not Terror-Related

Hall died after being shot by a guard at the NSA gates in Fort Meade, reports CBS Baltimore.

The investigation is being handled by the NSA, according to the Anne Arundel County police. Later, the FBI stepped in and took control of the investigation. CBS Baltimore reports that investigators have closed off roads around Fort Meade. The Anne Arundel fire department were on scene but a spokesperson said no information could be released because the incident happened on NSA property, reports the Baltimore Sun. The department were first called to the scene after they got a call about a vehicle collision at the NSA gates. Investigators say there is no link to terrorism. The FBI stressed that they don’t believe Fleming and Hall were trying to disguise themselves to get passed police. The Washington Post reports that Kevin Fleming was arrested in 2014 for stealing a tip jar containing $100.99. He was sentenced to probation as a result. Then, on March 9, Fleming was picked again by police on an unspecified probation violation. He’s been out of jail since March 25.

4. Earlier in March 2015, Hong Young Was Arrested for Allegedly Shooting at the NSA Building

Hong Young, from Beltsville, was arrested earlier in March 2015, charged with a string of shootings across Maryland. Those included one at the NSA where he allegedly shot at the building. Nobody was harmed in those attacks with Young telling police that he had been “hearing voices,” reports CBS News. Young had previously worked as a security guard.

5. Fort Meade Is the Third Largest Employer in Maryland

According to NSA documents, the agency moved to Fort Meade in 1955. There are more than 30,000 National Security Agency employees working at the facility. The agency makes up the largest proportion of workers at Fort Meade. The Department of Defense employee 4,000 people there and the U.S. military has 11,000 employees at Fort Meade. The entire base is the third largest employer in Maryland. Other agencies at the facility include the Defense Information School, United States Cyber Command and the Defensive Information Systems Agency. The base is located close to Baltimore and is bordered by the Baltimore-Washington Parkway. 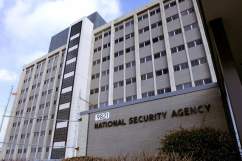 Read More
5 Fast Facts, Breaking News, Crime, Military, Shooting
Follow Heavy ↓
A homeless transvestite was shot dead by the NSA when he and a friend accidentally drove into a restricted area.