Sean “Diddy” Combs with his son, Justin Combs and his mother, Janice Combs, in 2011. (Getty)

Justin Combs is the son of hip-hop mogul Sean “Diddy” Combs and a junior defensive back at UCLA. His father was charged with assaulting Justin’s assistant football coach with a kettlebell, a deadly weapon, during an altercation at UCLA’s athletic complex following a practice Monday afternoon, the university said in a statement.

The coach was not seriously injured. Sean Combs was held at the campus jail and “is expected to be transported to the Los Angeles County Sheriff’s Department Inmate Reception Center later this evening,” the university said.

1. The Assistant Coach Was ‘Screaming’ at Justin During the Practice, Leading to the Confrontation 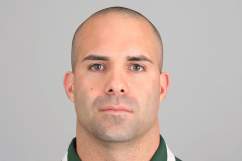 2. He Was an All-American Quarterback & Defensive Back While at His New York High School

Combs, a Mount Vernon, New York native, played in high school at Iona Prep. He was ranked as a three-star recruit by ESPN.com and the number 7 prospect in New York. He was Iona Prep’s starting quarterback as a senior and was an All-State and All-American.

3. He Has Played in 7 Games Over 2 Seasons as a Reserve & Special Teamer

Justin Combs, 21, is a junior defensive back for the Bruins. He has played in seven games during the 2013 and 2014 seasons, both on special teams and as a reserve on defense. He has recorded four career tackles.

4. His Scholarship to UCLA Created Some Controversy

Diddy with actor Michael Williams and two of his sons, including Justin Combs, left.

Justin Combs is on a football scholarship at UCLA worth $54,000, which created some controversy in 2012 when he committed to the team because of his family’s wealth.

Diddy said in a statement after his son committed to the school:

As a parent, today is one of the proudest moments of my life. This is everything a father could want for his son, for him to excel at what he loves to do and is truly passionate about. Justin is a shining example of what hard work, determination and a strong mentality can achieve. I am honored to call him my son and am happy that he is fulfilling his dream.

Combs, whose mother is Misa Hylton, is Diddy’s first-born son. He has two brothers and four sisters. 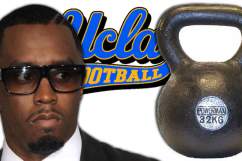 Loading more stories
wpDiscuz
2
0
Would love your thoughts, please comment.x
()
x
| Reply
Justin Combs is the son of Sean "Diddy" Combs and a football player at UCLA. His father has been accused of assaulting an assistant coach at UCLA.