A person with a gun has been taken into custody after being barricaded inside a West Virginia school, state police said. All students at Philip Barbour High School are safe.

Police and other emergency personnel shut down the area around the Barbour County school Tuesday afternoon, according to WBOY.

“The suspect has been isolated and law enforcement on the scene are currently working toward taking the suspect into custody,” state police said in a statement posted to Facebook.

1. There Was a Reported ‘Hostage-Type Situation’ Involving a Teacher

State Police confirm there was "a hostage-type situation" at Philip Barbour HS in Philippi. Police stress, "No students are in danger."

The incident was first reported to be a “hostage-type situation,” MetroNews West Virginia reports.

According to The Exponent Telegram, reports from the scene area that a teacher may be being held hostage by a student.

2. There Are No Reports of Injuries

State police said there are no reports of injuries at the school.

3. Police Were Calling for a ‘Battering Ram’

More pictures from scene. Witness at the scene tells me Route 250 shut down and more troopers are coming in pic.twitter.com/Ivz8pJmxMG

Police have called for a “battering ram” and negotiators, InterMountain.com reports.

4. Students Were Removed From the Scene by Bus

State Pol. PBHS: "The children are all safe. No injures.The children have been evacuated and are waiting buses. Suspect has been isolated."

State police said in a statement, “All children have been evacuated from the school and are safely awaiting buses.”

Later, state police said, “All school children at Philip Barbour High School have been accounted for and are safe. They have been released from the school grounds by school buses.”

Philippi is the county seat of Barbour County, West Virginia, and is a city of about 3,000 people.

According to U.S. News and World Report, Philip Barbour High School Complex, which includes grades Pre-K through 12, has 727 students and 47 full-time teachers. 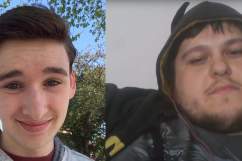