A former Hillary Clinton campaign staffer is leading the Democratic National Committee’s efforts to fight President Donald Trump as the director of its “Trump War Room,” The Hill reports.

Petkanas, 30, was hired by Clinton’s campaign in November 2015 as part of an overhaul of its communications staff, the New York Times reported.

He joined the DNC after the 2016 election loss to Trump.

1. Petkanas & His Staff Are Planning on a ‘Constant Campaign’ Against Trump From the War Room

.@Zac_Petkanas on Russia allegations: "We are just at the beginning of this scandal that's unfolding."#Tucker pic.twitter.com/frwq50Xeom

Zac Petkanas and his staff are planning a “constant campaign” against President Donald Trump and his administration, The Hill reports.

“That’s what it is going to take — a campaign mindset, a campaign effort, campaign operatives who are looking at this administration the same way they would be as if they were still running against him,” Petkanas said. “That is the mindset that is required right now … to be able to break through in a meaningful way.”

Petkanas has used Twitter, press releases and TV appearances to push the DNC’s opposition to Trump. He has gone toe-to-toe with Fox News host Tucker Carlson on multiple occasions.

The “war room” also includes former Clinton spokesperson Adrienne Watson, DNC digital director Tessa Simonds and DNC research director Lauren Dillon, according to The Hill. ABC News reports there are about a dozen staffers on the team. Their top target since Trump’s inauguration has been taking on his Cabinet picks and Supreme Court nominee Judge Neil Gorsuch.

“These are people who have experience and built-in knowledge about Donald Trump and who have spent the last several months collecting information, dossiers, past statements, conflicts of interest in preparation for these hearings, so that we can inform reporters as well as Americans as well as helping progressive groups who are mounting opposition and keep them informed on what they need to know about why these Cabinet nominees are a real problem for the United States,” Petkanas told ABC News.

Petkanas is a veteran of several campaigns. Before working for Clinton’s presidential campaign, he most recently worked for Media Matters.

According to his LinkedIn profile, Petkanas was working for as the vice president of communications at Media Matters, a job he started in January, before he was hired by the Clinton campaign.

Petkanas previously was the deputy campaign manager for Wendy Davis when she ran for governor in Texas in 2014. Prior to that, Petkanas worked in the office of Senator Harry Reid, D-Nevada, from 2011 to 2013 as a senior communications advisor, and as director of communications for his campaign from 2010 to 2011.

3. He Got His Start in Politics Volunteering for Howard Dean’s Presidential Campaign

Petkanas graduated from George Washington University in 2007. His first job, according to his LinkedIn profile, was as a scheduler and new media assistant for Rep. Hilda Solis, of California. He also worked as press secretary for the House Committee on Rules from 2007 to 2008, and then as the communications director for Ann Kirkpatrick’s Arizona congressional campaign in 2008.

He returned to Washington, D.C. in 2009 as the communications director for Pennsylvania Rep. Kathy Dahlkemper.

Petkanas told The Hill in 2009 he volunteered for Howard Dean’s presidential campaign as a college freshman.

4. He Left Behind a Career as an Opera Singer to Enter Politics

Petkanas sang arias as a professional boy soprano, he told The Hill in 2009. He spent one year at Boston University in its music school before transferring to George Washington University to pursue a career in politics.

He also had a brief role on the CBS soap opera As the World Turns, when he was 8.

“I had to go hug this woman — that was my direction,” he told The Hill. “I was 8 years old. I had my own dressing room.”

5. He Was Arrested for Meth Possession in 2013 & Has Been Sober Since Going to Rehab

Petkanas was arrested on August 17, 2013, at Grady Hospital in Atlanta after a nurse found “two small bags” of methamphetamine in his pocket, according to a police report obtained by the Post. Petkanas had been admitted to the hospital for an unknown reason at 4:55 a.m. He was working for the Nevada Democratic party at the time.

The drug possession charge against Petkanas was eventually dropped after he completed a pre-trial diversion program, the Clinton campaign told the New York Post. He also attended a voluntary rehab program in New York.

The Clinton campaign told the New York Post that the rehab program in his home state of New York helped Petkanas get clean.

“This was a bad choice that he of course regrets,” campaign spokesman Brian Fallon told the Post. “But the matter is resolved and he has made a full recovery in the years since. We are very glad to have him on our team.” 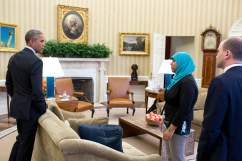 Loading more stories
wpDiscuz
13
0
Would love your thoughts, please comment.x
()
x
| Reply
Zac Petkanas is the director of the "Trump War Room" for the Democratic National Committee, leading the "constant campaign" against the new administration.