A husband and wife left their 6-month-old daughter with her grandmother before they went to an office holiday party and opened fire on the husband’s co-workers, killing 14 people and wounding 21 others.

Syed Rizwan Farook, 28, and his wife, Tashfeen Malik, 27, were later killed in a gun battle with police.

The shooting happened about 11 a.m. December 2 at the Inland Regional Center in San Bernardino, California, where the county public health department, where Farook worked as a health inspector, was holding a party.

The couple were killed about 3 p.m., following a police chase that began at a house in Redlands, about 15 minutes away from the scene of the shooting.

Witnesses said there were three shooters, but police said they now believe there were only two gunmen.

The FBI has said they are now investigating the case as terrorism.

The 14 victims have been identified by the coroner’s office. You can read about them here.

Here’s what we know so far about Farook and the shooting:

1. Farook’s Co-Workers Said He Came to the Party & Then Left Angrily

The shooting occurred during a Christmas party being held by the San Bernardino County public health department, which had rented a room at the Inland Regional Center.

Syed Farook is listed as a state employee who works as an environmental health specialist in San Bernardino. He has worked there for five years, police said.

His brother, who has the same first name but a different middle name, is also a state employee. He works for the Board of Equalization as a business tax representative. He was at work at the time of the shooting, according to their brother-in-law.

The name was used on police broadcasts as a possible suspect in the moments after the shooting. A witness said he had left the party and returned with another person and began shooting.

At about 11:40 a.m., an officer told dispatchers a witness said a male left the building “out of the blue,” and 20 minutes later the shooting started. The witness said he matched the physical description of one of the shooters and was acting nervous before leaving.

The Los Angeles Times, citing federal law enforcement sources, says one of the gunmen may have been at the Inland Regional Center earlier in the day and after leaving angrily, returned with one or two other men:

Ca shooting: Feds also theorize that one gunman was at the event earlier in the day to make sure a specific target was there, then returned

The New York Times is also reporting the shooting may have been related to a workplace-dispute:

via NYT, motivation for the target: pic.twitter.com/cP4hMyZQXs

Police say they have not confirmed a motive for the shooting, but confirmed that Farook was at the party and left in a way described as “angrily” by witnesses. Police tracked the suspects from those witness reports. Police also said they believe there was some planning involved, because of the amount of equipment used. 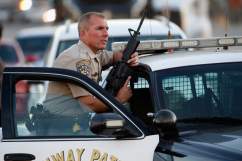 2. He Was ‘Radicalized’ & Communicated With a Terrorism Suspect Before the Shooting

Farook shown in a photo from a dating website.

According to CNN, Farook was radicalized and had been in contact with at least one person being investigated for terrorism, both by phone and on social media, prior to the shooting.

The FBI has said it is investigating whether international terrorism played a role in the shooting, but said it is too early to say anything definitive.

FBI agents are also digging into the background of Tashfeen Malik.

The FBI says she posted messages pledging allegiance to the Islamic State and its leader on her Facebook page prior to the shooting.

According to the Los Angeles Times, investigators are leaning toward a combined motive of workplace conflicts and terrorism.

Farook’s father, who was not named, told the New York Daily News his son was Muslim and “very religious.” He who would leave work to pray and then go back, his father said.

He told the newspaper his son was a health technician, inspecting restaurants and hotels for the health department.

A screengrab from one of Farook’s inspection reports. (San Bernardino County)

“I haven’t heard anything. He worked in a county office,” Farook’s father told the Daily News. “He’s married and has a kid. We’re estranged because my wife got the divorce, and they are together. She doesn’t want to see me.”

Farook graduated from California State University San Bernardino with a degree in environmental health in 2009.

She said he attended last year’s holiday party, which was held in the same conference room. Reisinger told the newspaper her former colleagues held a baby shower for him and he recently returned from paternity leave.

“I would say hi and bye, but we never engaged him in conversation. He didn’t say much at all,” Reisinger said. 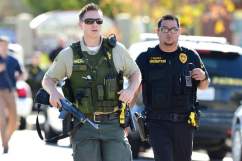 4. He Traveled Abroad Last Year & Came Back With His Wife

Farook took a trip to a foreign country in June 2014 and came back with his wife, the FBI says. They now have a 6-month-old baby. His wife, Tashfeen Malik, is from Pakistan and living in the United States on a K-1 visa, because she returned as Farook’s fiancee, with a Pakistani passport.

He told co-workers his wife was a pharmacist who he met online.

Patrick Baccari, who shared a cubicle with Farook, told the Los Angeles Times the couple appeared to be ” “living the American dream.”

Farhan Khan, who is married to Farook’s sister, said at a press conference he has “absolutely no idea why he would do this. I am shocked myself.”

Farook had a profile on a dating website, which was set up when he was 22. The profile on imilap.com says he is looking for marriage.

The profile says, Farook was from a “religios (sic) but modern family of 4, 2girls 2boys.” He says his family’s values are a “Eastern and Western Mix.”

His interests were listed as “working on vintage and modern cars,” reading religious books, “eating out sometimes,” travel, “and just hang out in back yard doing target practice with younger sister and friends.”

On another dating website, Dubai Matriomonial, he says he is a Sunni Muslim.

5. Police Found 12 Pipe Bombs & Thousands of Rounds of Ammo at the Couple’s Home

A broken window and crushed fence are seen at a home in Redlands, California linked to the San Bernardino shooting suspects after a SWAT team went in to investigate. (Getty)

Police Chief Jarrod Burguan said the couple was found after police followed leads to a house in Redlands, California, about 15 minutes away from the shooting scene. Officers saw a vehicle matching one suspected of being involved in the shooting. They followed the vehicle and a chase began. At the end of a chase, officers were fired upon by the suspects in the car, and returned fire.

Burguan said the suspects, wearing “assault-style” tactical clothing and armed with assault rifles and handguns, died at the scene of the shootout in San Bernardino.

Police said they used assault rifles and handguns during the attack on the party, and were wearing vests to carry their ammunition. An explosive made of three pipe bombs tied together with a remote detonator was found at the Inland Regional Center.

Police served a search warrant at the home in Redlands the Redlands Daily Facts reports. The home is near Center Street and Pine Avenue and is were the police chase began.

Police are moving in now. pic.twitter.com/hrKD3NVTAz

Police said they found thousands of rounds of ammunition in that home, along with 12 pipe bombs and other items used to make explosives.

The house was still being searched Thursday morning.

Burguan said the couple had enough ammunition and explosives for another attack.

Two of the guns were purchased by Enrique Marquez, Syed Farook’s childhood friend. The guns were bought three years ago. The FBI raided Marquez’s home, and he has checked into a mental health facility. Read more about Marquez at the link below:

You can read about Syed Farook in Spanish at our sister site, Ahora Mismo: 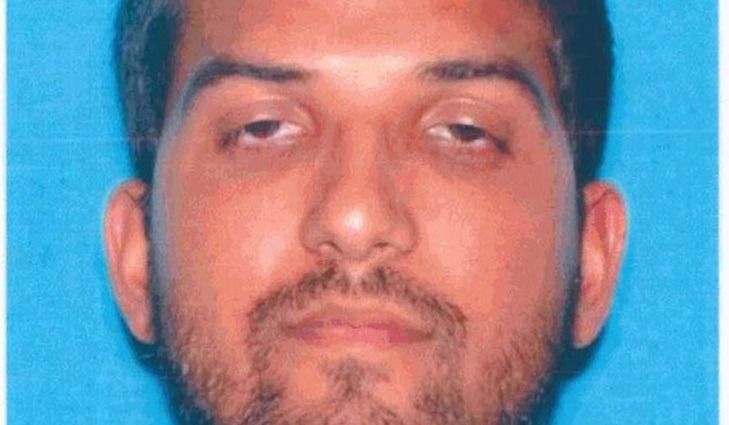 Editor’s Note: In an earlier version of this story, the gunman was identified as Sayeed Farouk. Photos previously used in this article were of Syed Farook’s brother, who has the same name, but a different middle name as the San Bernardino shooting suspect.

Loading more stories
wpDiscuz
371
0
Would love your thoughts, please comment.x
()
x
| Reply
Syed Rizwan Farook has been identified as one of the suspected gunmen in the shooting at the Inland Regional Center in San Bernardino, California.