Earth Day 2016 is being celebrated around the world on April 22, including on Google, which is featuring a series of Google Doodles depicting the Earth’s diversity.

“The vastness of Earth’s diversity makes it an intimidating topic, but in the end I chose to highlight Earth’s five major biomes: the tundra, forest, grasslands, desert, and coral reefs,” wrote the Google illustrator, Sophie Diao. “In each illustration, you’ll find one animal who’s been singled out for their 15 minutes of fame. Each time you visit Google.com, you’ll randomly receive one of the five doodles. Keep refreshing to admire a different side of Earth’s immense beauty.”

Here’s what you need to know about Earth Day 2016:

1. Earth Day Was Founded by a United States Senator in 1970 as a National ‘Teach-in’ Day

Earth Day is nearing its 50th anniversary. The now-worldwide holiday was founded in 1970 by United States Senator Gaylord Nelson, of Wisconsin, as a national “teach-in” day, according to the Earth Day Network.

Nelson wrote about the origins of Earth Day on Envirolink:

I announced that in the spring of 1970 there would be a nationwide grassroots demonstration on behalf of the environment and invited everyone to participate. The wire services carried the story from coast to coast. The response was electric. It took off like gangbusters. Telegrams, letters, and telephone inquiries poured in from all across the country. The American people finally had a forum to express its concern about what was happening to the land, rivers, lakes, and air – and they did so with spectacular exuberance.

Earth Day worked because of the spontaneous response at the grassroots level. We had neither the time nor resources to organize 20 million demonstrators and the thousands of schools and local communities that participated. That was the remarkable thing about Earth Day. It organized itself.

According to the Earth Day Network, 20 million Americans participated in the first Earth Day.

“Thousands of colleges and universities organized protests against the deterioration of the environment. Groups that had been fighting against oil spills, polluting factories and power plants, raw sewage, toxic dumps, pesticides, freeways, the loss of wilderness, and the extinction of wildlife suddenly realized they shared common values. Earth Day 1970 achieved a rare political alignment, enlisting support from Republicans and Democrats, rich and poor, city slickers and farmers, tycoons and labor leaders,” the Earth Day Network says on its website.

2. Earth Day Is Now Marked Around the World, With Activities Celebrating the Environment & Fighting for Its Preservation

A protester holds a sign at an Earth Day rally April 22, 2001 in front of the United Nations in New York City. (Photo by Spencer Platt/Newsmakers)

Earth Day has now grown to the point where an estimated billion people around the world mark the holiday, according to the Earth Day Network.

Activities on Earth Day 2016 include protests and marches calling for action to preserve the environment. Other activities include celebrations of nature, and clean-up efforts.

“Earth Day is the largest, most recognizable face of the environmental movement,” Kathleen Rogers, president of Earth Day Network, said in a statement. “Millions of people in dozens of different countries will become lifelong environmentalists this and every Earth Day. Hundreds of thousands will be children – our planet’s future. They will join the more than 1 billion people who already use Earth Day to focus on the urgent need to stabilize and reduce global greenhouse gas emissions, fight climate change, act locally, become climate voters, and protect their children’s futures.”

You can find events and activities occurring around the United States here, from the EPA. Other events can be found on the Earth Day Network’s website.

3. The Organizers of Earth Day Have a Goal of Planting 7.8 Billion Trees

Young Indian girls pose with their painted faces during a ‘Save Earth’ awareness program on the eve of World Earth Day at a school in Patiala on April 21, 2015. (Getty)

The Earth Day Network has launched an effort to plant 7.8 billion trees as the holiday approaches its 50th anniversary. Its theme for Earth Day 2016 is “Trees for Earth.”

“Trees will be the first of five major goals we are undertaking in honor of the five-year countdown to our 50th anniversary. On their own and together, these initiatives will make a significant and measurable impact on the Earth and will serve as the foundation of a cleaner, healthier and more sustainable planet for all,” the Earth Day Network says.

The 7.8 billion trees would be one for every person Earth.

“That’s incredibly ambitious, but we believe this down-payment must be made in order to combat climate change and keep our most vulnerable eco-systems from facing extinction,” the Earth Day Network says.

4. The Historic Paris Climate Change Agreement Will be Signed by 120 Nations on Earth Day 2016

Bianca Cortinas pulls a train made of six pack plastic straps during a public demonstration in honor of Earth Day April 22, 2014 at the Globe at Columbus Circle in New York. Designer Tatiana Pages created the train to illustrate a net of garbage to make an environmental statement, take action, inspire creativity and bring awareness to the need for environmental stewardship. (Getty)

This year’s Earth Day will be marked by the signing of the historic Paris Agreement that came out of the United Nations Framework Convention on Climate Change in December 2015. The United States is among 120 countries set to sign the agreement.

“We have no higher priority this year than to make sure the United States, China, India, the EU, and all the largest CO2 emitters sign the Paris Agreement. EDN has launched a petition calling on world leaders – including President Obama — to show leadership .We need to prove that what happened in Paris last December was not all talk. We need to take action,” Earth Day Network President Kathleen Rogers said in a statement. “Signing the Paris Agreement this Earth Day at the United Nations is just the beginning. That, coupled with our global activities, will make this the largest, most significant Earth Day in years. And it’s the perfect start in our countdown to Earth Day 2020, our 50th!”

5. This Year’s Earth Day Comes Just After One of the Warmest Recorded Months in History

Earth Day 2016 comes after the 11th straight month with record warm temperatures, according to the National Oceanic and Atmospheric Administration:

At the risk of sounding like a broken record, March set another heat record for the globe. As Earth continues to warm and is influenced by phenomena such as El Niño, global temperature records are piling up.

According to the NOAA, the average temeprature around the globe in March was 2.20 degrees F above the 20th century average.

“This was not only the highest for the month of March in the 1880-2016 record, but also the highest monthly temperature departure among all months on record, surpassing the previous all-time record set last month by 0.02 degrees F. March also marked the 11th consecutive month a monthly global temperature record has been broken, and is the longest such streak in NOAA’s 137-year climate record,” the NOAA says. 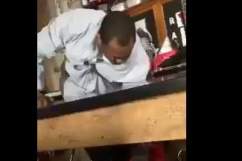 Read More
5 Fast Facts, Breaking News, Earth Day, Google Doodle
Earth Day is being celebrated on April 22, 2016, with a Google Doodle. Find out about the history of the worldwide holiday here.