Who's head is on the hook for allowing the #MelaniaSpeeches ?
His names is #RickGates pic.twitter.com/6B7HxId914

Rick Gates, a former lobbyist and top aide to Donald Trump, described as a “former business associate” of Paul Manafort, has been indicted by special prosecutor Robert Mueller in the Russia investigation, The New York Times is reporting.

Manafort, Trump’s former campaign chairman, was also charged criminally, although the nature of either charge is not yet clear, The Times alleged. Rick Gates, previously a publicly unknown figure, first hit the news during the Republican National Convention when he was initially accused by multiple media outlets, citing anonymous sources, of overseeing Melania Trump’s now infamous and possibly plagiarized Republican National Convention speech. Another person, Meredith McIver, an “in-house staff writer” at the Trump Organization, eventually said she was responsible for the Melania plagiarism.

You can read more about Rick Gates being indicted here. Both Gates and Paul Manafort have surrendered to the FBI. Here’s the full indictment:

Reported Roll Call before the McIver admission: “Campaign aide Rick Gates signed off on and edited the speech, according to The Guardian and other media outlets.” However, The New York Times reports that the Trump campaign denies Gates bears responsibility, and CNN said Gates said he “absolutely” was not responsible for the similarities in Melania Trump’s speech and Michelle Obama’s 2008 convention address.

Who is Rick Gates?

1. He Has a Lobbying Background, Is an Associate of Paul Manafort & Was Involved in Manafort’s Businesses

Trump strode onto the Convention stage to the song “We Are The Champions,” just before introducing his wife to thousands of Republicans. (Getty)

The New York Times described Gates as “a longtime protégé and junior partner of Mr. Manafort. His name appears on documents linked to companies that Mr. Manafort’s firm set up in Cyprus to receive payments from politicians and businesspeople in Eastern Europe.”

The indictment alleges that Manafort and Gates (identified as Richard W. Gates III) served “for years as political consultants and lobbyists. Between at least 2006 and 2015, Manafort and Gates acted as unregistered agents of the Government of Ukraine, the Party of Regions (a Ukrainian political party whose leader Victor Yanukovych was President from 2010 to 2014), Yanukovych, and the Opposition Bloc (a successor to the Party of Regions that formed in 2014 when Yanukovych fled to Russia.”

Gates said he didn’t oversee “the process of putting together the speech,” said CNN, quoting him as telling CNN’s Jim Acosta “absolutely not.” The network added, though, that: “Sources familiar with the campaign’s handling of Melania Trump’s speech identify top Manafort deputy Rick Gates as the person inside the campaign who oversaw the entire speech process for Melania Trump.”

Politico had reported that Manafort, the man Trump hired as his “new chief campaign strategist” had brought in people with lobbying histories to hold key positions in the Trump campaign. One of those people, said Politico, was Rick Gates.

Now @CNN are trying to blame this on Rick Gates, Manaforts chief aide, saying he should be fired. If he goes, will Manafort resign?

Manafort was front and center after the plagiarism allegations flew, calling them “absurd,” said The Guardian. “There’s no cribbing of Michelle Obama’s speech,” Manafort said to CNN, adding that “there’s no feeling on her part that she did it.”

The UK Daily Mail also wrote that “Sources inside the Donald Trump campaign and the Republican Party” were blaming Gates, and called him “the campaign chairman’s lobbying partner before he came aboard the Trump train.” Daily Mail, citing sources, said Gates had “final authority” over convention speeches.

Daily Mail says the Trump Campaign spokesman denied that Gates was a speechwriter and wrote the news site: “Rick’s not a speechwriter and he doesn’t have a role in the campaign’s speechwriting process – we have other people for that.” The New York Times story contained a similar denial.

2. He Was ‘Identified’ as an Agent of a ‘Ukrainian Oligarch’ In a Now Dismissed Lawsuit 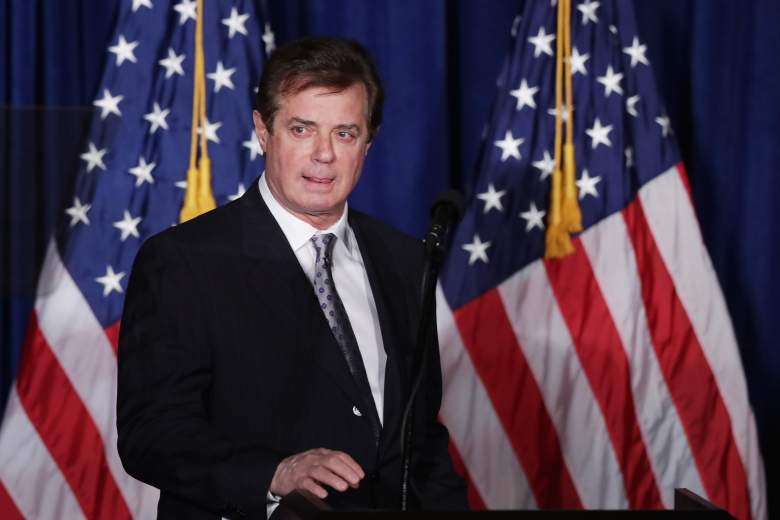 According to Politico, Gates “was identified as an agent of a Ukrainian oligarch in a 2011 racketeering lawsuit that also named Manafort.” Read the lawsuit here.

The Guardian says Manafort – who was brought into the Trump campaign to help Trump pin down Republican delegate support – “is a veteran Republican operative with connections to a number of foreign regimes, including that of former Ukrainian president Viktor Yanukovych.”

The political news site Politico identified Gates as once working at the Hartford, Connecticut-based firm Business Strategies and Insight LLC, registering with another man “to lobby Congress on behalf of Xavier Chemical Co., a Georgia firm that was locked in a dispute with the U.S. Army about a federal contract to operate a former ammunition plant.”

Gates also lobbied for “GTECH, which dominated the state lottery equipment business but also came under legal scrutiny for its business practices,” Politico reported, adding, “More recently, Gates represented the American Stock Exchange and VILF Consultants, a Virgin Islands company lobbying on the territory’s infrastructure. Gates was named in a racketeering lawsuit brought in U.S. federal court by former Ukrainian Prime Minister Yulia Tymoshenko against Manafort and his associates for their work for pro-Russian strongman Yanukovych. The complaint, first reported by the Washington Free Beacon, describes Gates as an agent of Ukrainian gas oligarch Dmytro Firtash, who Tymoshenko accuses of improperly shielding profits.” The suit was dismissed because it fell outside the jurisdiction of the United States.

3. He’s Been Described as a ‘Top Trump Delegate Wrangler’ & May Have Been Distracted by The Floor Fight 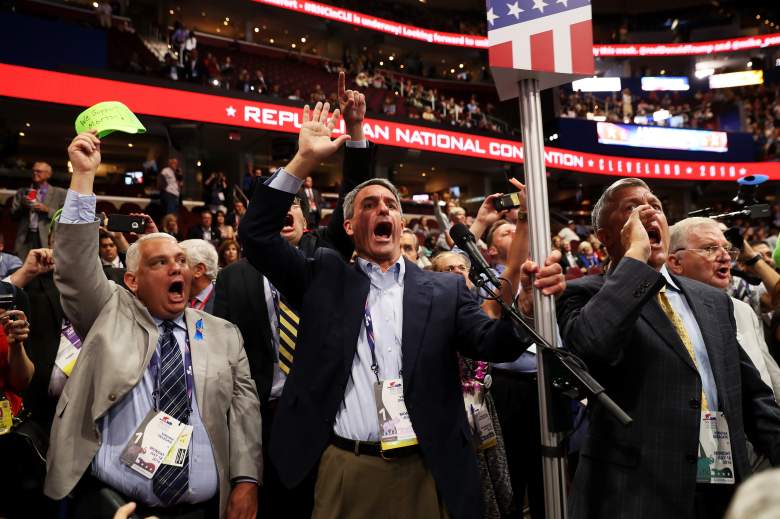 The Republican National Convention nearly erupted into chaos when “Never Trump” supporters thought they were being denied their right to a roll call vote. (Getty)

CNN said that Gates was heavily involved in efforts to make sure that party rules were not changed at the convention in a way that would hurt Trump. “Trump aides and RNC staff could be seen fanning across the floor, pulling aside delegates and coordinating their counter-efforts,” said CNN. “Top Trump delegate wrangler Rick Gates said he was confident they would be able to repeat their success last week when the Rules Committee met and blocked efforts to unbind the delegates.”

CNN quoted Gates as saying: “Our goal is to destroy them.” Daily Mail says Gates might have been so distracted by the convention floor issues that he didn’t make sure Melania’s speech was fully vetted.

Daily Mail says Gates has the title of deputy convention manager and was “in charge of putting down a ‘NeverTrump’ rebellion on Monday.”

As for the speech plagiarism accusations, Trump’s campaign blamed Hillary Clinton (although an independent journalist first noticed the similarities) and media bias. The New York Times says a veteran speechwriter, Matthew Scully, may have written an early draft of the speech that was then mostly ripped up. But anonymous fingers pointed toward Rick Gates:

The Guardian reported, “A campaign source suggested to the Guardian that the blame lay with Rick Gates, a longtime aide to top Trump strategist Paul Manafort. The source said Gates signed off on the speech and edited it.”

4. Gates & Manafort Are Accused of Hiding Millions of Dollars in Work for Ukraine

The indictment alleges that Manafort and Gates “generated tens of millions of dollars in income as a result of their Ukraine work. In order to hide Ukraine payments from United States authorities, from approximately 2006 through at least 2016, Manafort and Gates laundered the money through scores of United States and foreign corporations, partnerships, and bank accounts.”

The indictment contends that Manafort and Gates “funneled millions of dollars in payments into foreign nominee companies and bank accounts, opened by them and their accomplices in… Cyprus, Saint Vincent…the Grenadines…and the Seychelles.” The indictment says that Manafort and Gates were required by law to report to the United States their work and fees because they “directed a campaign to lobby United States officials on behalf of the Government of Ukraine, the President of Ukraine and Ukrainian political parties.”

5. Another Speechwriter Wrote a Version of the Speech But It May Have Been Ripped Up

The New York Times said a veteran speechwriter named Matthew Scully may have helped write an earlier version of Melania’s speech but it was all but ripped up. The Times, quoting a source, said that Scully, “a contract speechwriter” wrote the early draft “several weeks ago. Ms. Trump then took that speech and made substantial changes to it, according to this person, with help from someone working at the Trump Organization.” The Times also says that a speechwriter named John McConnell may have helped Scully with the early torn up draft.

But Scully's version was all but totally ripped up https://t.co/xrU0zC0rFY

According to The Daily Caller, Scully, in one night, wrote the highly watched speech that Sarah Palin, then the governor of Alaska, gave to the 2008 Republican National Convention. The speech “helped cement her status as a national star,” said The Daily Caller.

Scully told National Review of that speech, “In Sarah Palin’s 2008 convention address, no words at all were needed on the subject: Just the sight of the governor and her infant son Trig, a child with Down syndrome, said it all.” He also wrote speeches for George W. Bush and Paul Ryan, and worked for a pro-life Democratic governor, Bob Casey.

Time Magazine says “Scully is best known for his vigorous defense of animal rights.” The magazine described Scully as “A vegetarian who is regularly critical of the NRA and much of the hunting community” and said he supports getting rid of some forms of hunting, which made him an unusual choice for the hunting enthusiast, Sarah Palin. He’s been called Paul Ryan’s ‘vegan speechwriter’ by The Daily Caller. He wrote an article for National Review called “Pro Life, Pro Animal.”

Melania was captured on video telling NBC’s Matt Lauer of her RNC speech: “I read once over it and that’s all because I wrote it with as little help as possible.” Trump’s campaign has said, “In writing her beautiful speech, Melania’s team of writers took notes on her life’s inspirations, and in some instances included fragments that reflected her own thinking.”

On Twitter, some were calling Gates a “scapegoat” for the Melania accusations.

According to The New York Times, Melania asked Meredith McIver, a “New York City-based former ballet dancer and English major who has worked on some of Mr. Trump’s books” for help. 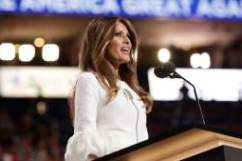