Voters who complained about the quality of questions asked at the first presidential debate between Republican Donald Trump and Democrat Hillary Clinton now have a chance to put their proverbial money where their mouth is. For the second presidential debate, any American voter — or for that matter, any member of the public — may submit a question.

And their fellow Americans will vote to choose the best questions, which will have a chance to be asked on the air in from of millions of viewers.

The debate will be held on Sunday, October 9, at Washington University in St. Louis, Missouri, starting at 9 p.m. Eastern Time, 6 p.m. Pacific. Like the first debate, will run for about 90 minutes. Unlike the first presidential debate, the second debate will be held in “town hall” format, with half of the questions coming from audience members and the other half asked by moderators Anderson Cooper of CNN and Martha Raddatz of ABC.

Here’s how you can submit questions for the candidates.

Over 5500 questions have been submitted at https://t.co/Qn7hvlivb4! Make sure your voice is heard: submit & vote on ?s for #Debates2016

PresidentialOpenQuestions.com is a site operated by the Open Debates Coalition, a multi-partisan group made up of liberals, conservatives and moderates alike. Submitting a question is easy, first, create a free account on the group’s site by visiting this link.

You will be asked to create a unique user name and a password. You will also be required to fill out fields for your first and last name, and zip code. The site also asks for a phone number and Twitter handle, but submitting information in those categories is optional.

Once your account is created, return to the site’s welcome page at this link, and click the “Submit a Question” button. You will then see a drop down form that looks like this…

Select a category for your question from the drop down menu. The 10 available categories include such selections as “Economy & Jobs,” “Education,” “Foreign Policy & Military,” and “Health.”

Next, enter your question in the next box down — up to 80 characters in length — followed by an explanatory statement in the middle box of up to 200 characters.

For example, one recent question read, “How will you specifically revitalize America’s schools?”

The voter who submitted the question, “Cindy D.” from Michigan, added the explanatory statement, “Our German exchange student was far ahead of our students in terms of her education. Far too much money has been cut from our public schools and is cheating our young people and teachers of resources.”

If you feel the need, you may enter a web link to supporting material and information in the bottom box. But that part is optional.

Finally, click “Add Your Question” — and that’s it. You’re on your way to hearing your question asked of the candidates at the second presidential debate.

Wait — You Mean My Question Might Not Be Asked?

Well, no. Only the top 30 vote-getting questions will even be considered by Cooper and Raddatz for the list of questions that will be put to Trump and Clinton at the Washington University debate. And here’s the real catch. CNN and ABC, have promised only to consider whether to ask the 30 voter questions. While it’s highly unlikely that all 30 will find their way into the 90-minute debate, it’s also possible that CNN and ABC will choose to ignore all of the questions completely.

The good news is, the top 30 questions will be — and currently are — easily viewed on PresidentialOpenQuestions.com, so viewers will be able to tell right away whether any were asked or passed over. 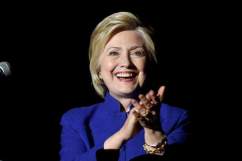 Presidential Debate Schedule: When Are the Second & Third Debates?

Here’s How to Vote on Questions

Voting is even easier than submitting a question. Once you’ve created your account, following the instructions above, you can return to the home page to see a list of questions that, at first, will be sorted by the questions that are “trending now.”

To see more questions, click the drop down menu to the right of the words “sort questions by” and choose another option, such as “Most Votes,” “Newest First” or “Random.”

Another way to see more questions is to click on one of the category names directly above the “Sort questions by” drop down menu. For example, “Civil Rights,” or “Infrastructure & Technology,” to see all questions submitted in any specific category.

To vote, you will see a “vote” button to the left of each question, that looks like this…

If you see a question that you want to hear asked at the second presidential debate, just click the red “vote” button and that’s it. The button will turn dark and will now say, “voted.” You’ll also see how many total votes that question has now received.

Are There Any Rules For Submitting Questions?

The Second Presidential Debate Will Try Something New
Ordinary Americans will be able to submit—and vote… https://t.co/A1dkcVy6Uo

There is one rule for submitting questions important enough to be stated — twice — on the site’s welcome page. No question may mention a specific candidate. All questions must be general enough to asked of either Trump or Clinton. So questions about Clinton’s emails or Trump’s “Trump University” lawsuit are out. Questions about either candidate’s views on student debt, or net neutrality, or tax break for corporations — those are in.

Otherwise, the Open Debates Coalition lists the following rules on its “Participation Guidelines” page at this link.

•No hate speech, graphic content, threatening or abusive language, or profanity.
•No commercial promotion, spam, or other unrelated content.
•No trolling (questions offered without intellectual honesty or in effort to discredit the site).
•All submissions must be worded as a question.
•Questions must not name or allude to a candidate and must be able to be posed to either candidate. (This is to curtail gotcha questions, avoid statements that are directed at candidates instead of posing questions, and to keep the focus on issues of long-term import to voters.)
•Questions must be germane to the goal of understanding more about the candidates’ platforms, positions, policies, background, and values.

The coalition will delete questions that violate those terms — and will also weed out duplicate questions.

“We define a duplicate as any question that shares the same or very similar intent as a previously submitted question,” the site says. “The point of the question platform is to measure the true support for unique questions. Having multiple submissions of a single question dilutes the votes and advocacy for it.”

The easiest way to find out if your question is a duplicate is to enter your keywords — for example, “gun control” or “Planned Parenthood” — in the search field, as described above. If you see that your question has already been submitted, you can always vote for it.

What Are The Top Vote-Getting Questions?

ABC's #MarthaRaddatz and CNN's #AndersonCooper will moderate the second presidential debate on Oct. 9. She https://t.co/XUtlWBgL0R

To see the current top-vote getters, visit the PresidentialOpenQuestions.com welcome page and select “Most Votes” from the “sort questions by” drop down menu, as described above.

As of September 29, 11 days before the second presidential debate, the number one question — with 12,788 votes — was “Would you support term limits for members of Congress and the Supreme Court?”

Other top vote-getters included, “Do you support allowing Gary Johnson to participate in the final debate?” which had received 8,197 votes; “Will You Support a Voter ID System that Insures that Only US Citizens Can Vote?” tallying 6,786 votes and “Would you be willing to either repeal or repair/rework the Affordable Care Act?” at 5,662 votes.

And that’s it. The idea of asking voter questions submitted through the internet was first proposed as far back as 2008, when then-Senator Barack Obama and his opponent, Republican John McCain, both favored the plan. But the Commission on Presidential Debates, which organizes and runs the three general election debates, did not agree. Until now.