In a segment where anchor Chris Cuomo interviews Republican Congressman Chris Collins of New York about Hillary Clinton and the election, CNN loses his signal right after he mentions WikiLeaks.

Redditors in a subreddit for Republican Party presidential candidate Donald Trump claim it’s an example of CNN’s bias and mainstream media collusion with the Democratic Party.

Many were jarred by how flippant Cuomo was once the signal was lost. Redditor Turst writes, “They’re not even trying…” Others claim that it sounded as if Cuomo were being sarcastic in his response of, “Oh no. All right, let’s see if we can get Congressman Collins back. Obviously, we just lost his satellite feed. That sucks.”

The video comes out three days after Cuomo made an on-air claim that it’s illegal for anyone but the media to read WikiLeaks, advising CNN viewer to only learn about the Podesta emails through them.

It is not illegal for Americans to read the WikiLeaks hacks.

To learn more about the WikiLeaks hack and their most revealing messages about the Hillary Clinton campaign, click here. 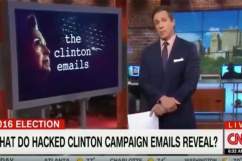 WATCH: CNN Claims It’s Illegal for Anyone But the Media to Read Clinton WikiLeaks Emails