The fact check was featured in a post-debate article by NBC titled “Sixteen Fact Checks From the Second Presidential Debate” and reads:

The fact check refers to Trump’s claim in the debate that Clinton destroyed 33,000 emails after receiving a subpoena. The Clinton camp has denied the claim, but an August 2016 FBI report shows that Trump is speaking truth.

In a subreddit about the NBC fact check titled “They Just Gave Up,” Trumps supporters are up in arms about the literal interpretation of Trump’s statement. 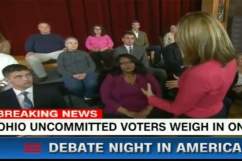