While talking about the Supreme Court during the third presidential debate Wednesday night, Donald Trump mentioned comments made about him by Justice Ruth Bader Ginsburg, using it as an example of why the next president’s ability to appoint justices will be so important.

Trump was referencing comments made by Ginsburg in July during an interview with CNN. You can watch the CNN report above.

“He is a faker,” the 83-year-old justice told CNN. “He has no consistency about him. He says whatever comes into his head at the moment. He really has an ego. … How has he gotten away with not turning over his tax returns? The press seems to be very gentle with him on that.”

She also criticized Trump in July interviews with the New York Times and the Associated Press.

She also said her late husband, Martin Ginsburg, would have said, “‘Now it’s time for us to move to New Zealand,’” if Trump became president while he was alive.

Ginsburg also told the Associated Press she does not want to envision a Trump presidency.

“I don’t want to think about that possibility, but if it should be, then everything is up for grabs,” Ginsburg said.

“Justice Ginsburg of the U.S. Supreme Court has embarrassed all by making very dumb political statements about me. Her mind is shot – resign!” Trump tweeted.

Ginsburg later apologized for her comments, calling them “incautious,” in an interview with NPR.

“I did something I should not have done,” she said. “It’s over and done with and I don’t want to discuss it anymore.”

During the debate Wednesday, Trump said Ginsburg made harsh comments about him and his supporters.

“She was forced to apologize, and apologize she did,” Trump said at the debate. 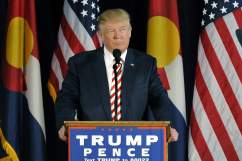 Donald Trump Says the Election Is ‘Rigged’: 5 Fast Facts You Need to Know