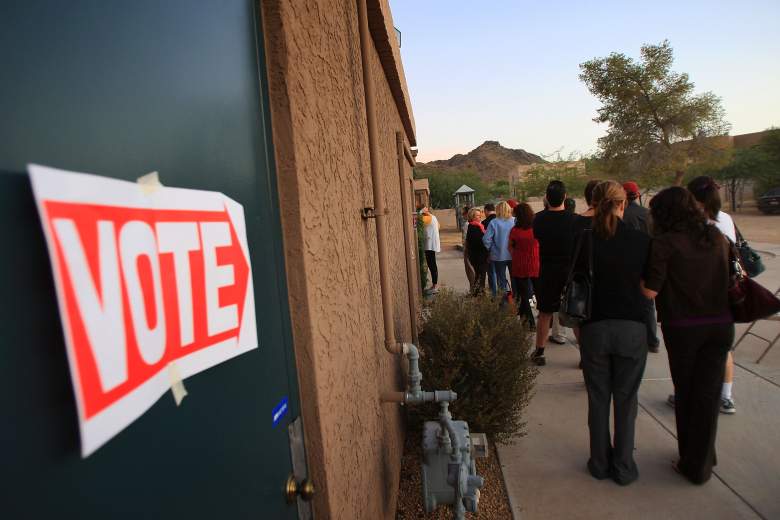 Voters wait in line in Phoenix, Arizona during the 2008 election. (Getty)

More Hispanic voters are casting ballots early this year than did in 2012, a statistic which suggests that Hillary Clinton could actually have a chance of turning the state blue.

But according to 12 News, a recent poll showed that 83 percent of Hispanics in Arizona said they plan to vote this year. Arizona has the sixth highest Hispanic population in the country, and of all eligible voters in Arizona, 22 percent of them are Hispanic.

Based on polling, it’s safe to say that the majority of Hispanics and Latinos who voted early did not vote for Donald Trump. A Univision poll conducted in September found that 68 percent of Hispanic voters in Arizona plan to vote for Hillary Clinton, while 18 percent said they’d vote for Donald Trump. But this poll also found that Hillary Clinton actually has less support from Hispanics than Barack Obama did in 2012, suggesting that this all might not be enough to turn the state blue after all. Univision’s 2012 poll found that 74 percent of Arizona Hispanics and Latinos backed Barack Obama, six percentage points higher than currently back Hillary Clinton.

The Hillary Clinton campaign has made a concerted effort to win over Hispanic voters in Arizona, and on Thursday, Tim Kaine is set to deliver a speech in Phoenix entirely in Spanish.

The number early ballots from Democrats in Arizona has gone up this year, and the turnout among Republicans has decreased. According to Catalist (via CNN), 33.3 percent of the ballots turned in as of November 1st, 2016 come from Democrats. That number was 32.3 percent at this point in 2012. Meanwhile, 38.8 percent of the ballots come from registered Republicans. While the GOP is still in the lead, that number was 42.3 percent in 2012. As we’ve seen in a few other swing states, the Democratic turnout isn’t necessarily way up, but the Republican turnout has noticeably decreased.

Still, many are skeptical whether Hillary Clinton can actually win this red state on Election Day, speculating that a Democratic win in Arizona might take a few more election cycles. In Real Clear Politics’ polling average, Donald Trump leads Hillary Clinton by an average of 3.0 points. This is a smaller lead than Mitt Romney had going into the 2012 election; by this point four years ago, Romney led Barack Obama by 7.5 points. But no major election forecast is predicting a Hillary Clinton win in the state. The New York Times’ The Upshot gives Trump a 68 percent chance of winning Arizona, and FiveThirtyEight gives him a 67.8 percent chance.

Loading more stories
wpDiscuz
1
0
Would love your thoughts, please comment.x
()
x
| Reply
More Hispanic voters are casting ballots early in Arizona than did by this point in 2012. Could Hillary Clinton, not Donald Trump, win the state?